The extended 90-minute session saw drivers focus on running Pirelli’s prototype rubber for next year, building on the findings from Austin one week ago with a softer selection of compounds.

Drivers were required to run identical programmes through the session, comprising two five-lap runs before then going for two eight-lap runs.

Russell was one of only five drivers permitted to use the 2022 tyre compounds during FP2 at the Autodromo Hermanos Rodriguez on Friday afternoon, having sat out FP1 for Mercedes reserve driver Nyck de Vries.

Russell was joined by AlphaTauri’s Yuki Tsunoda, Alpine’s Esteban Ocon and Williams’ Alex Albon in running the 2022 tyres through the first half of the session.

Russell set a fastest lap time of 1m19.970s on the soft compound tyre, finishing eight-tenths of a second clear of Tsunoda in second place. Ocon was a further four-tenths of a second behind in third for Alpine, the trio having completed their initial runs on mediums.

While the rest of the field was focused on Pirelli’s 2023 tyres, the running was interrupted 33 minutes into the session when a red flag was thrown after Leclerc crashed heavily at Turn 7, losing the rear of his Ferrari F1-75 car when turning in.

Leclerc had been three laps in to his third stint on the Pirelli prototype tyre, but impacted the barrier at the entry to the esses with the rear of his car, causing damage to the rear wing and left corner. The Monegasque quickly reported over the radio that he was OK, but said: “The car is not.”

The damage to the barrier meant it took 20 minutes before running could resume, by which point all drivers were left focusing on Pirelli prototypes through the remainder of the session.

Lewis Hamilton set the fastest lap time on the prototype tyre during his third stint after pitting halfway through his second run. The seven-time world champion finished 1.5 seconds down on Mercedes team-mate Russell at the head of the field.

He narrowly beat Red Bull driver and home favourite Sergio Perez, who was just seven-hundredths of a second further back having reported struggles with rear locking earlier in the session. Perez was also seen trying a number of different lines at Turn 1 after noting some bouncing at the end of the straight.

Leclerc’s lap time set during his second stint on the prototype tyres was still good enough for seventh place ahead of Ferrari team-mate Carlos Sainz, while Valtteri Bottas and Pierre Gasly rounded out the top 10.

Fernando Alonso ended FP2 in 11th place for Alpine ahead of Aston Martin’s Sebastian Vettel, while Albon could only muster 13th after only completing a short run on the 2022 softs before switching to the prototype tyres for Williams.

McLaren duo Lando Norris and Daniel Ricciardo ended the session 14th and 15th respectively ahead of Lance Stroll in the second Aston Martin, with Mick Schumacher following in 17th for Haas. 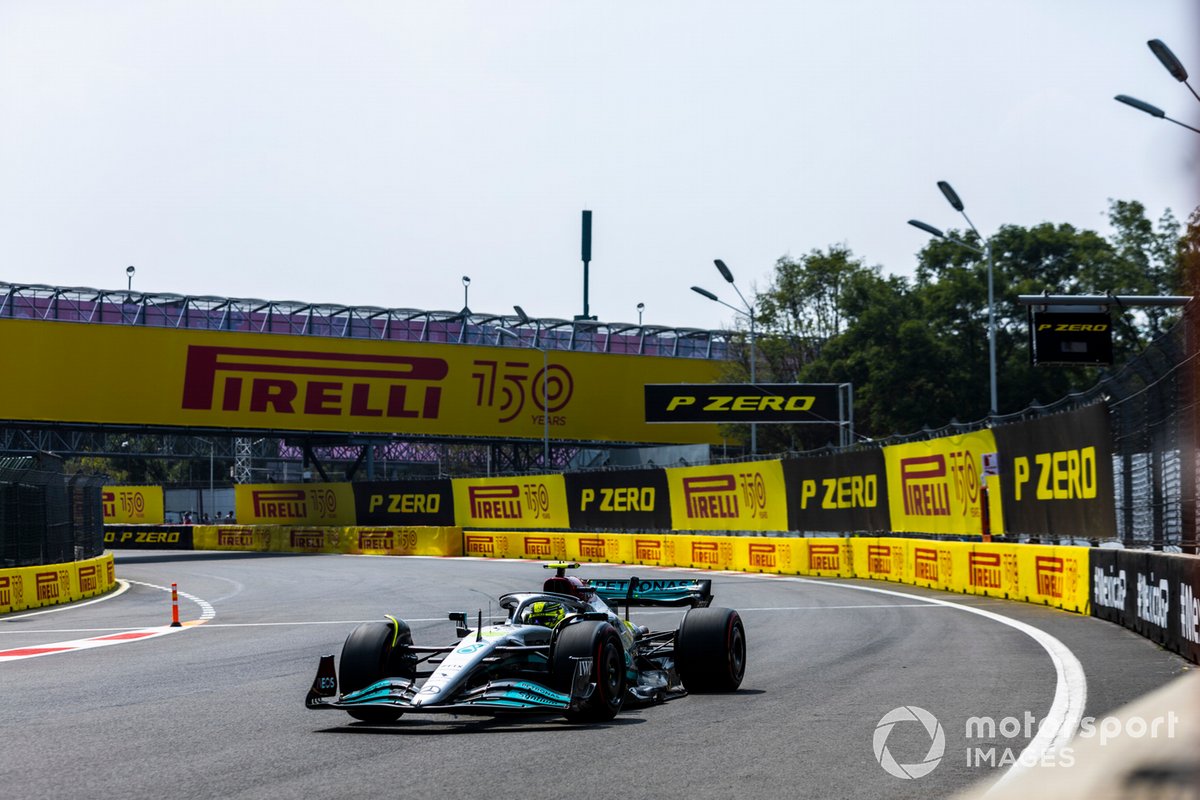 Kevin Magnussen was limited to 20 laps through the session after losing the opening half an hour due to an engine change by his Haas team following the stoppage in FP1 when Pietro Fittipaldi was in the car.

Magnussen will take a five-place grid penalty for Sunday’s race as a result of the engine change, which was outside of his allocation for the season.

Due to the lost time, Haas opted against running him on the 2022 tyres and instead focused on Pirelli prototype running, leaving him 18th overall only ahead of Williams’ Nicholas Latifi and Alfa Romeo’s Zhou Guanyu.

Zhou brought out a red flag with less than two minutes left on the clock in FP2 after reporting a hydraulic failure, pulling to the side of the track in Foro Sol after being instructed to stop his car.