There was little action in the first half of the final one-hour practice session after a car in the Freightliner GTM support series dropped oil at the Turn 4 90-degree left-hander at the end of the track’s second straight.

The issue had been treated with cement dust, but it was still enough to keep all the cars in their garages – unwilling to come out an clean the surface – until AlphaTauri sent Yuki Tsunoda out for a series of slow laps after 10 minutes had passed.

Tsunoda’s first representative lap established the first-place benchmark time at 1m20.927s, which he eventually worked down to a 1m19.744s as his run continued.

After Lance Stroll joined Tsunoda, the rest began to trickle out of the pits, with Kimi Raikkonen taking the top spot on 1m19.299s just after 20 minutes had passed.

The top spot time was then bettered repeatedly as the field streamed around – all drivers running the soft tyres at this stage except for Fernando Alonso and Pierre Gasly, who did their initial running on the mediums.

Perez then put Red Bull on top for the first time with a 1m18.625s – at the end of which he reported “chattering” from his front tyres in the high-speed section at the end of the second sector, where Red Bull was taking time against Mercedes in Friday practice due to the higher downforce levels on the RB16Bs.

Charles Leclerc then put Ferrari on top with a 1m18.213s, just before the halfway mark, which was when Verstappen headed out for the first time and Perez moved back ahead on a 1m17.934s. 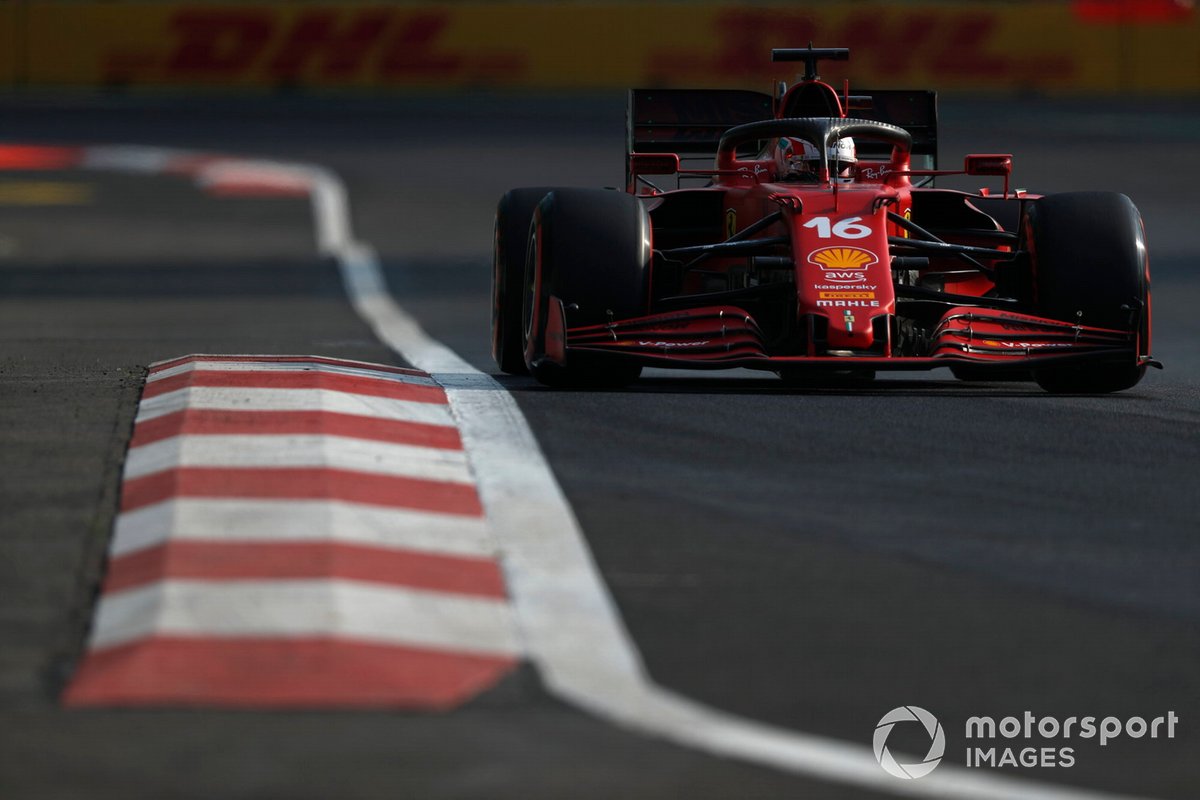 But Verstappen immediately posted a 1m17.537s to take the best time, which he bettered after a slow recharge lap – posting a 1m17.217s on his second flier on the same set of softs.

As Perez used his new softs to close the gap his team-mate to 0.055s, Hamilton did eventually improve his own personal best with a series of fast-slow-fast runs, which put him third.

He was third behind Perez and Verstappen in that order, as the home hero continued his run on his second set of softs and found time enough with his second effort – a 1m17.024s – retake first place with five minutes of the session remaining.

Verstappen emerged from the pits in the final minutes, the Red Bull mechanics having been working hard at the rear of his car, but his final qualifying simulation effort could not topple Perez.

A big slide exiting the Turn 3 left, as well as an oversteer moment just after crossing the remaining oil/cement dust combination at Turn 4 meant he lost time to Perez as the lap developed and Verstappen did not post a personal best – reporting over his team radio that it was “so weird, I’ve no grip at all”.

Hamilton’s best in third left him 0.651s adrift, something he repeated incredulously to engineer Pete Bonnington when informed of the gap in the session’s closing moments.

Bottas was fourth ahead of Carlos Sainz Jr and Tsunoda, with Daniel Ricciardo, who was practicing getting a tow from Norris – set to start at the rear of the field after taking a new engine here – in the middle of the session, seventh for McLaren.

Gasly ended up eighth after taking the softs for the session’s second half, with Leclerc, who half-spun on a late flier after climbing heavily over the Turn 3 kerbs, ninth in the second Ferrari.

Norris rounded out the top 10, ahead of Stroll and Raikkonen.