Charles Leclerc took fourth for Ferrari but ended up even further back from the dominant Mercedes pair, complaining about understeer aboard his F1-75.

If Ferrari can solve that, F1 may get a three-team fight for pole on Saturday at the Autodromo Hermanos Rodriguez, with Red Bull also needing to ease Verstappen’s path over the kerbs around the track that held him back in this session.

Mercedes, conversely, looks to have a smoother build up towards qualifying with the W13s looking more planted in FP3 at a venue where the thin air at high altitude negates the impact of that package's extra drag, which is a hinderance at other circuits.

As the one-hour session commenced, Valtteri Bottas led the pack out of the pits – the Alfa Romeo running the medium tyres for the initial laps – and he duly set the first place benchmark at 1m21.462s.

A few minutes later, Hamilton was the first of the frontrunners to emerge – his Mercedes fitted with softs from the off, as was the case for all his rivals.

Hamilton’s opening effort moved him into first place, although he had to beat Bottas’s second flying lap of his opening run that had brought the best time down to a 1m21.041s.

With a 1m20.505s, Hamilton moved ahead – but only for a few seconds as Leclerc, looking to make up for his costly FP2 crash, was following closely behind and going quicker.

Leclerc’s opening effort moved him into first on a 1m20.487s, which stood as the best time until the end of the first 10 minutes when Sainz slotted in ahead to break the 1m20s bracket on 1m19.884s.

After Perez put in Red Bull’s first softs flier that left him 0.354s adrift before Leclerc’s second flying lap meant he squeezed in behind his team-mate, Russell produced a smooth opening effort to shoot to the top of the times on a 1m19.405s.

After Mick Schumacher had spun off after hitting the kerbs too hard at Turn 10 – as Verstappen did in FP1 – and briefly come to a tyre-smoking stop in the runoff behind Turn 11, Verstappen emerged as the session’s opening third was about to end.

As is so often the case with the world champion in practice sessions, he immediately went fastest with a 1m19.296s – but was unhappy with his handling over the kerbs at the first corners, as his RB18 had snapped left with oversteer exiting Turn 3. 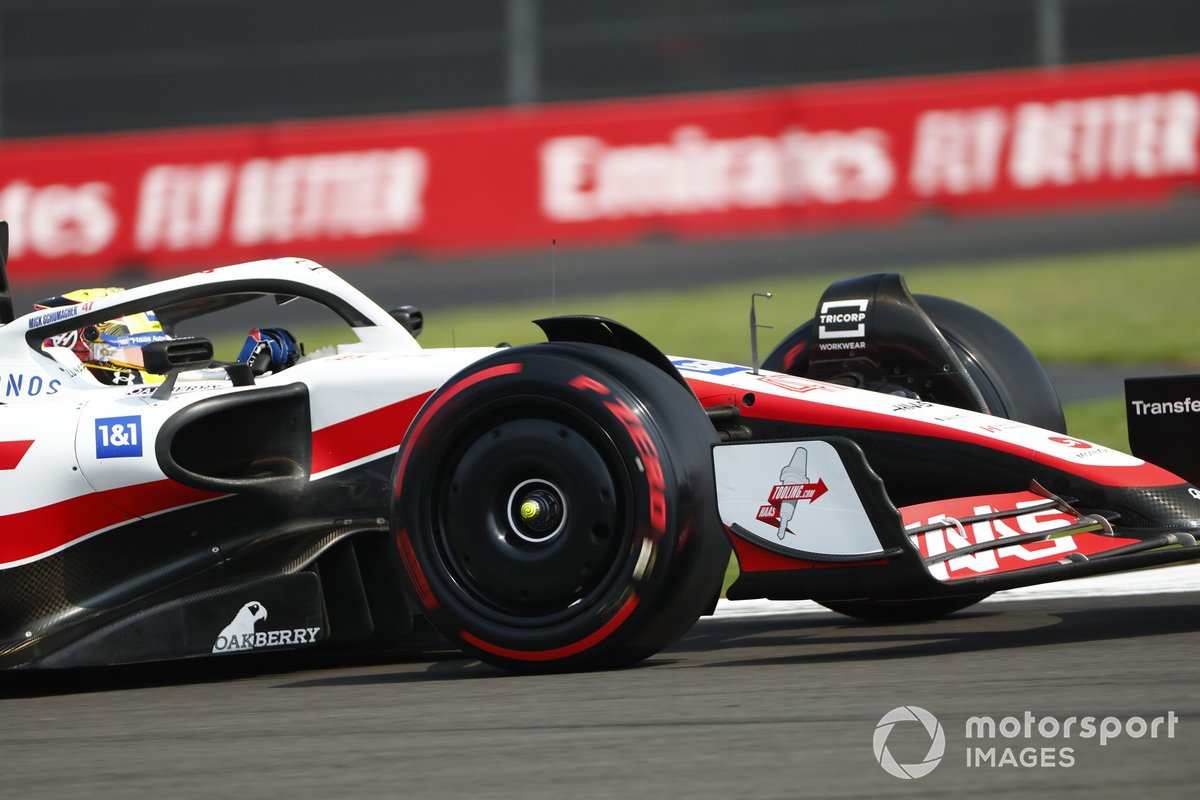 After a few cooldown laps and a trip through the pits, Verstappen completed his second flier on the softs – benefitting from a tow from Perez down the main straight, possibly foreshadowing tactics Red Bull will deploy in qualifying at a venue where that strategy badly backfired in 2021.

Verstappen roared to a purple sector one and then although he lost a touch of time in the middle sector, he had enough tyre life left to improve the top time to a 1m19.118s.

The flurry of fast times ended through the middle part of the session, where the Ferrari drivers – by this stage down to fourth and fifth in the standings – each completed a high-fuel race-data-gathering run on the softs.

Just before the start of the final third, Russell rumbled back to the top spot with a 1m18.399s – to forge ahead of Verstappen by 0.7s with a sudden big gain that broke the pack into the 1m18s bracket for the first time.

Hamilton was following just behind his team-mate and slotted into second 0.144s adrift, but did lose a chunk of time through the third sector having set the pace in the middle part of the lap.

This was followed by a short lull in action with the majority of the cars in the pits and only Lando Norris circulating, before Verstappen was among those heading back out with just over 15 minutes remaining.

The Dutchman started a third flier on the softs but abandoned it after going carefully and too slowly over the kerbs of the first corners and then having a small lock up into Turn 4 – after which he reported the “same problem again” regarding his problems over the early kerbs. 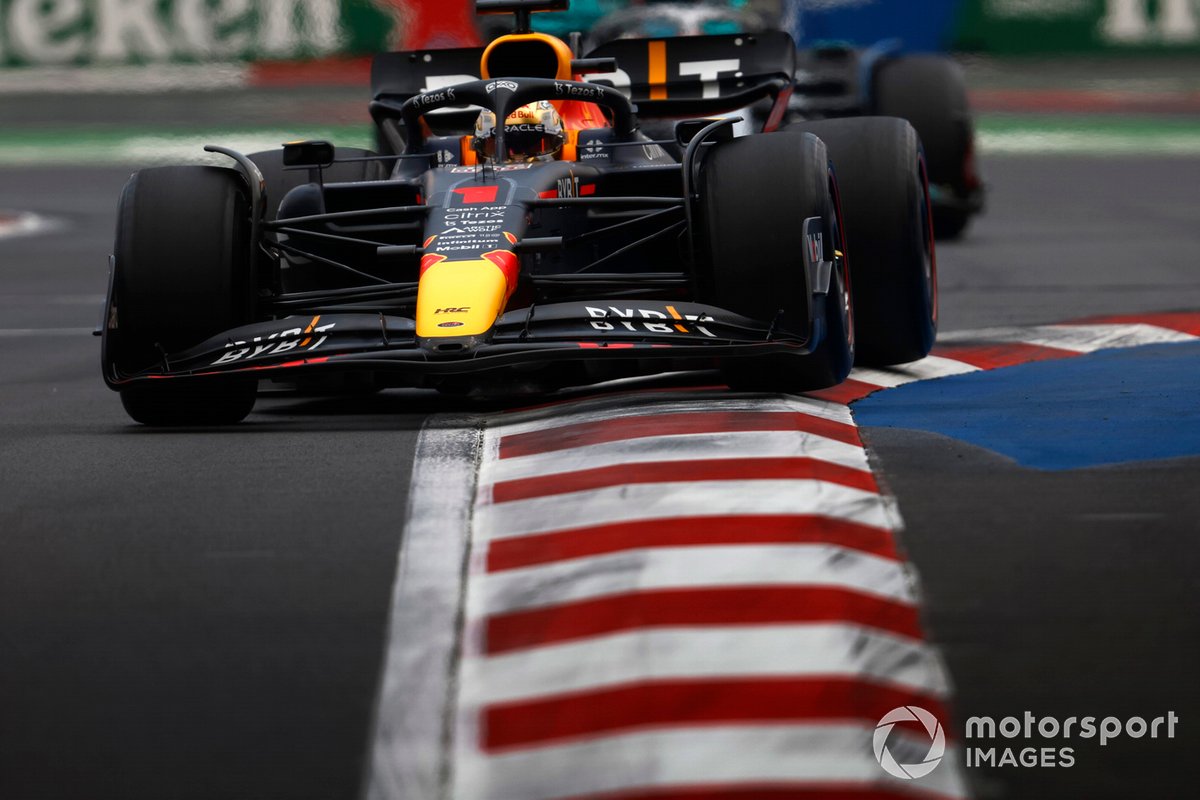 After another preparation lap, Verstappen went again on his latest set of softs and improved his personal best to close to 0.477s off Russell’s leading time, but remained third, with Perez also setting a personal best and moving into sixth – the home hero losing time with a lock-up and slide deep at Turn 13 in the stadium section.

Just ahead of the final five minutes, Perez improved again to move up to fourth – albeit 0.842s slower than Russell – before the Ferrari drivers re-emerged for a final qualifying simulation run, with the leading Mercedes drivers and Verstappen back in the pits.

Both Leclerc and Sainz improved here in the closing minutes, but only enough to jump the former ahead of Perez to take fourth 0.724s behind Russell, with Sainz taking sixth 0.902s down.

The leaders did emerge with a few seconds of FP3 left to complete post-session practice starts, where Leclerc had enough time for one final flier that ended up being 0.4s off his personal best with no improvements in any sectors. The Monegasque subsequently complained on his radio of “so much understeer” and that the car is “not turning at all”.

Norris ended up seventh behind Sainz, ahead of Bottas and Yuki Tsunoda, who had a brief off-track moment at Turn 1 later in the session.

Schumacher finished 17th after having another wild moment running hard over the kerbs at Turn 9 mid-way through the session, finishing behind Lance Stroll and Pierre Gasly.

Gasly improved from the foot of the times only late-on after struggling with oversteer in the early part of the lap that, at one stage in the final 10 minutes, had him catching a huge slide exiting Turn 4.