Carlos Sainz led team-mate Charles Leclerc for a Ferrari 1-2 in an FP1 session ahead of Formula 1’s 2022 Mexican Grand Prix that was twice red flagged and ended early.

A late failure for Liam Lawson - the F1 rookie replacing Yuki Tsunoda in the AlphaTauri - forced the session to be abandoned four minutes before time to leave Sainz to sit pretty in first.

With the Autodromo Hermanos Rodriguez so dirty due to its lack of use and in view of an extended FP2 being dedicated to a 2023 Pirelli tyre test, the entire field soon emerged into the opening hour of running and all 20 drivers circulated with the hardest C2 white tyre.

From the busy start, Verstappen ran fastest from the first five minutes as he toured round in 1m23.282s to sit six tenths faster than team-mate Perez, as Leclerc was forced back to the pits with a suspected left-rear puncture that benched him for 15 minutes.

Verstappen would whittle away at his time to find another half second before Daniel Ricciardo came to split the Red Bulls and sit a little over a second adrift of the champion.

But Ricciardo would then be forced for a spell on the sidelines while McLaren investigated a brake issue as Perez replaced his stablemate at the top courtesy of a 1m22.702s effort.

Verstappen then nicked first place back by 0.411s as he ran to a 1m22.291s before most drivers darted for the pits after a quarter of an hour before bolting on a set of C4 softs. 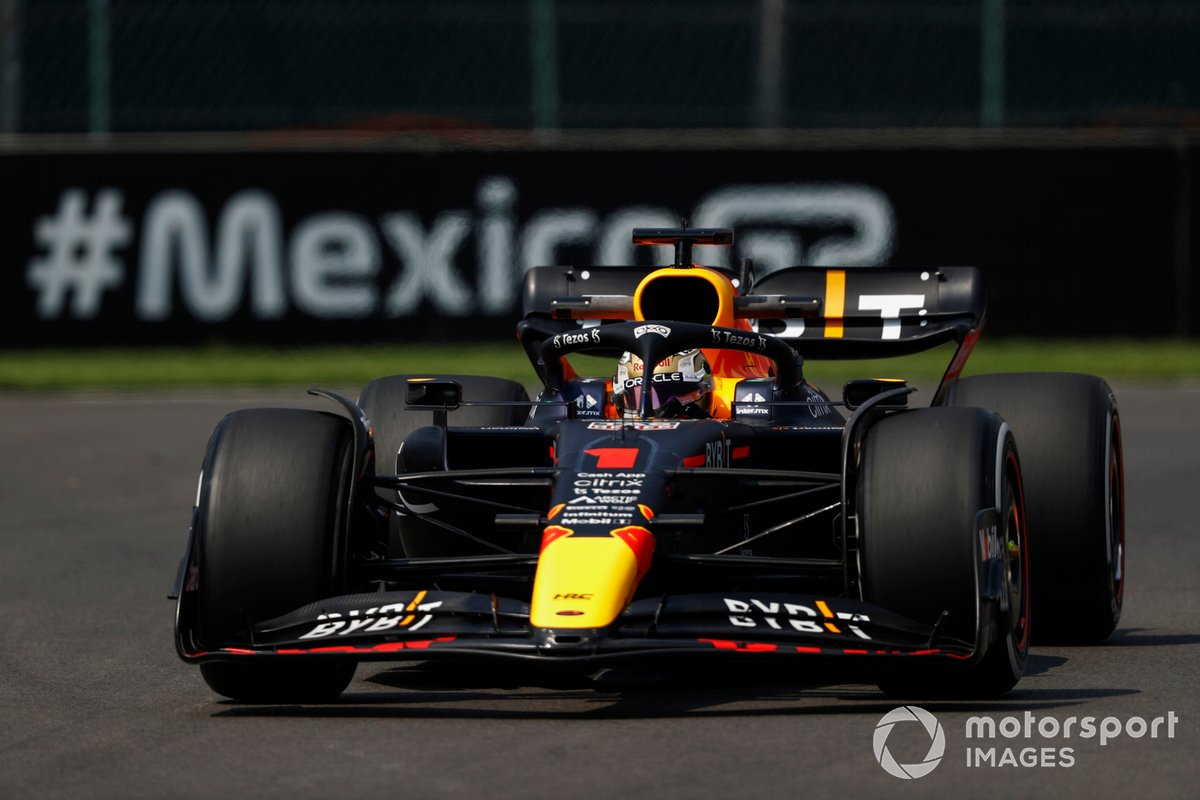 In a bid to make up for lost running, Leclerc headed out on the red-walled tyres somewhat early and became the first driver to lap in the 21s, running to a 1m21.546s to find 0.745s over Verstappen thanks to the quickest second and third sectors of anyone at the time.

Verstappen’s retaliation had to wait, though, due to a rare error for the Dutch racer, who could not catch a sliding rear to spin the Red Bull RB18 through the Turns 9-10 chicane.

He lit up the rears to recover from the tank slapper, having shaken his head and complaining of no grip, but elected not to pit to then run to a 1m20.827s that guided him to fourth place.

That left him 0.12s down on Leclerc but with an identical lap time to his team-mate Perez.

Sainz, therefore, could provisionally head the order for Ferrari as the Spaniard pounded round in 1m20.707s to sit pretty by 0.046s over his Monegasque team-mate Leclerc.

The running was then interrupted by a red flag for the Haas of Pietro Fittipaldi - the Brazilian replacing Kevin Magnussen in the VF-22 - breaking down on the main straight after a puff of smoke from the engine eventually left him to park up out of the first corner.

Another red flag might have been called moments earlier when Zhou Guanyu shut down his Alfa Romeo in the pitlane exit to prevent overheating after an upshift failure.

But the marshals were soon enough able to push the stricken car behind the exit line to allow the Alfa mechanics to recover Zhou without the need for a session stoppage.

However, the session was actually red flagged for a second and final time with four minutes left on the clock when Lawson’s car expired into Turn 13 with a sudden failure.

As a result of his pulling over to deprive the AT03 of cool air, the brakes that the Kiwi had complained of throughout of the session caught fire to leave FP1 to not be resumed.

That meant Sainz set the pace by 0.046s over Leclerc as Perez and Verstappen wound up in third and fourth - 0.12s in arrears - while Lewis Hamilton led Mercedes in fifth place.

Of the five substitute drivers, Lawson ran fastest despite his troubles in 16th, while 2023 Williams driver Logan Sargeant ran to 17th, two places behind Nicholas Latifi.

AlphaTauri-bound Nyck de Vries was 18th as he replaced George Russell in the W13 - the Dutch driver notably thanking the team for his three years before his switch.

Jack Doohan was hampered by a power unit issue to guide his Alpine to 19th ahead of Fittipaldi.