Max Verstappen has been crowned the 2022 Formula 1 world champion in bizarre circumstances after Charles Leclerc copped a late penalty in a heavily delayed and wet Japanese Grand Prix.

The Red Bull driver dominated a time-limited and controversial event at Suzuka to win by close to half a minute, but not scoring the bonus point for fastest lap looked to leave him one point short of the title.

However, a post-race 5s penalty for runner-up Leclerc - adjudged to have gained an advantage by running through the last chicane - dropped the Ferrari racer behind the Mexican to hand Verstappen the championship.

The ever-changing weather forecast for the Suzuka weekend culminated in the rain shower that was originally predicted to hit after the race instead dousing the grid in the build up.

As such, all drivers opted for intermediate tyres for what was kept as a proper standing start.

But conditions proved marginal, as the red flag was deployed owing to a messy opening lap.

Leclerc had enjoyed the superior launch, despite the limited grip, to draw alongside polesitter Verstappen and the Ferrari even pulled ahead by half a car length. However, the Red Bull driver kept his foot in through the first corner to hold the line and decisively retake first place.

Meanwhile, there was a litany of incidents behind in the limited visibility and low grip. 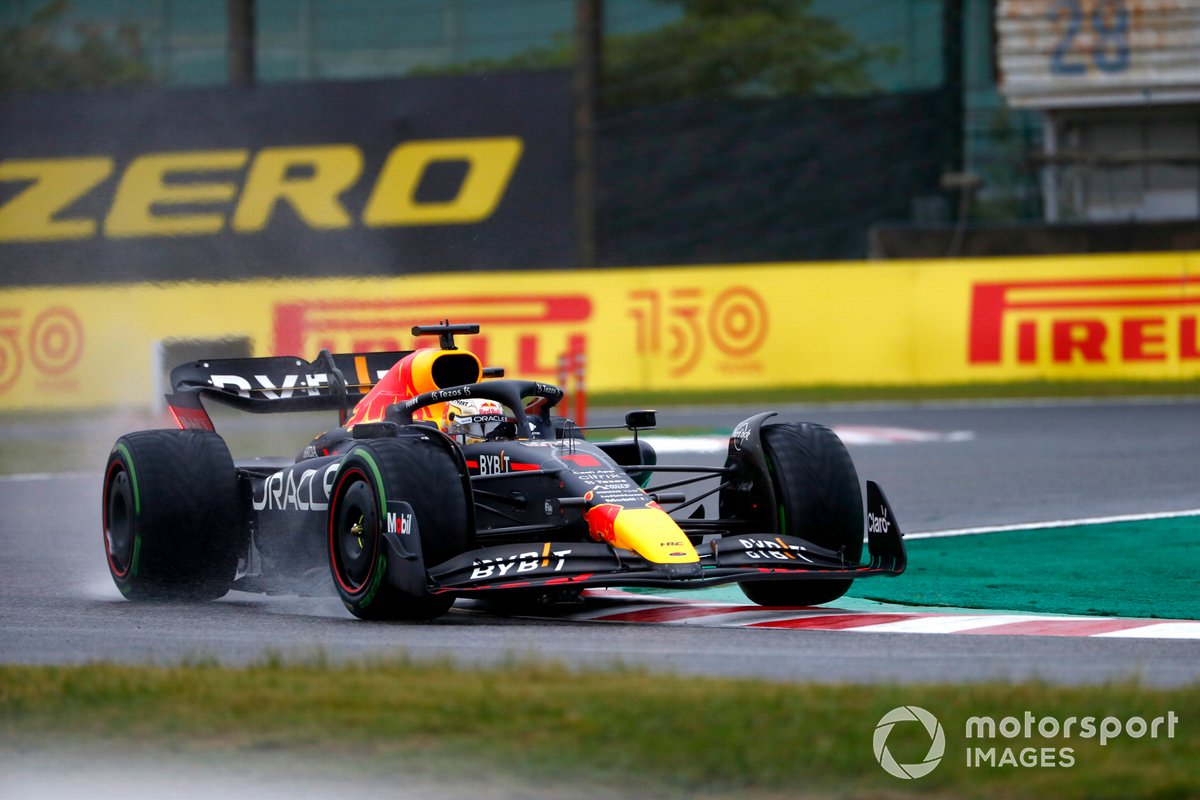 Third-starting Carlos Sainz, having been jumped by Sergio Perez, caught a patch of standing water while accelerating and the torque surge spat him at considerable into the barrier.

He was eliminated with a crumpled rear wing, while Alex Albon pulled over on the gravel with Williams engine trouble, as Zhou Gunayu spun his Alfa Romeo to rejoin in 17th place.

Sebastian Vettel, meanwhile, dropped from his impressive ninth in qualifying to 16th after a bump with Fernando Alonso into Turn 1 that pitched him into the gravel and the Aston spun.

Pierre Gasly, starting the AlphaTauri from the pitlane owing to a rear wing spec change and revised suspension, drove over an advertising board ripped off from the Sainz impact.

That tore off his front wing and became stuck to block his visibility and force a pitstop.

For all of this, the safety car was initially deployed before the red flags halted events at 1408. 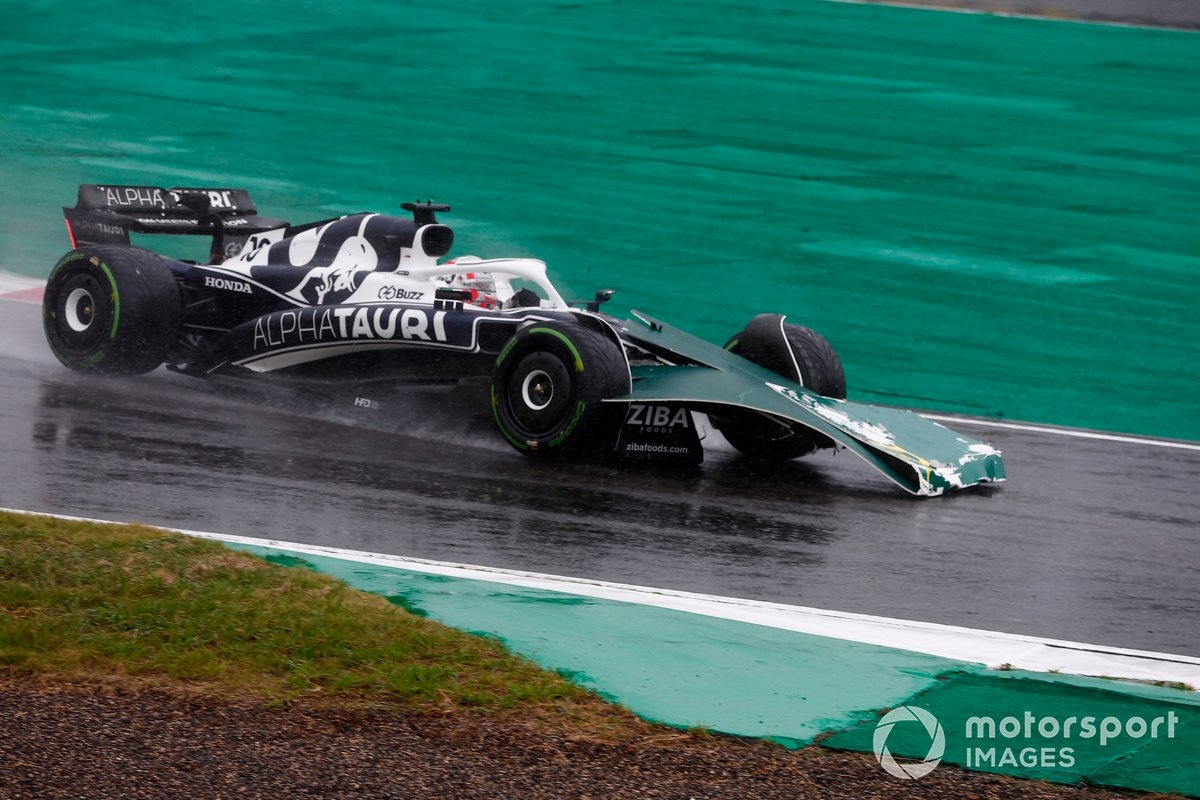 Of concern, when Gasly rejoined on full wets and just as the full red flags came, he appeared to pass at speed a flatbed recovery tractor on track through Turn 12. The driver was furious.

This incident will be investigated after the race, with Gasly summoned to the stewards.

The contention lies over Gasly’s pace while closing to the pack, which the FIA states was “up to 250km/h (155mph)”. The recovery vehicle was on track at that site for the entire field.

There has been considerable backlash from current and ex-F1 drivers on social media.

The stoppage had run for 42 minutes before a 1450 local time restart was planned, which was meant to be led by a rolling start behind the safety car as the extreme wet tyre was mandated.

However, two minutes before time, the restart procedure was suspended indefinitely by race control and over the next 80 minutes, heavier showers periodically arrived at the track.

In that time, the medical car was sent out occasionally for reconnaissance laps, but conditions did not improve sufficiently until almost two full hours had passed after the initial red flag. 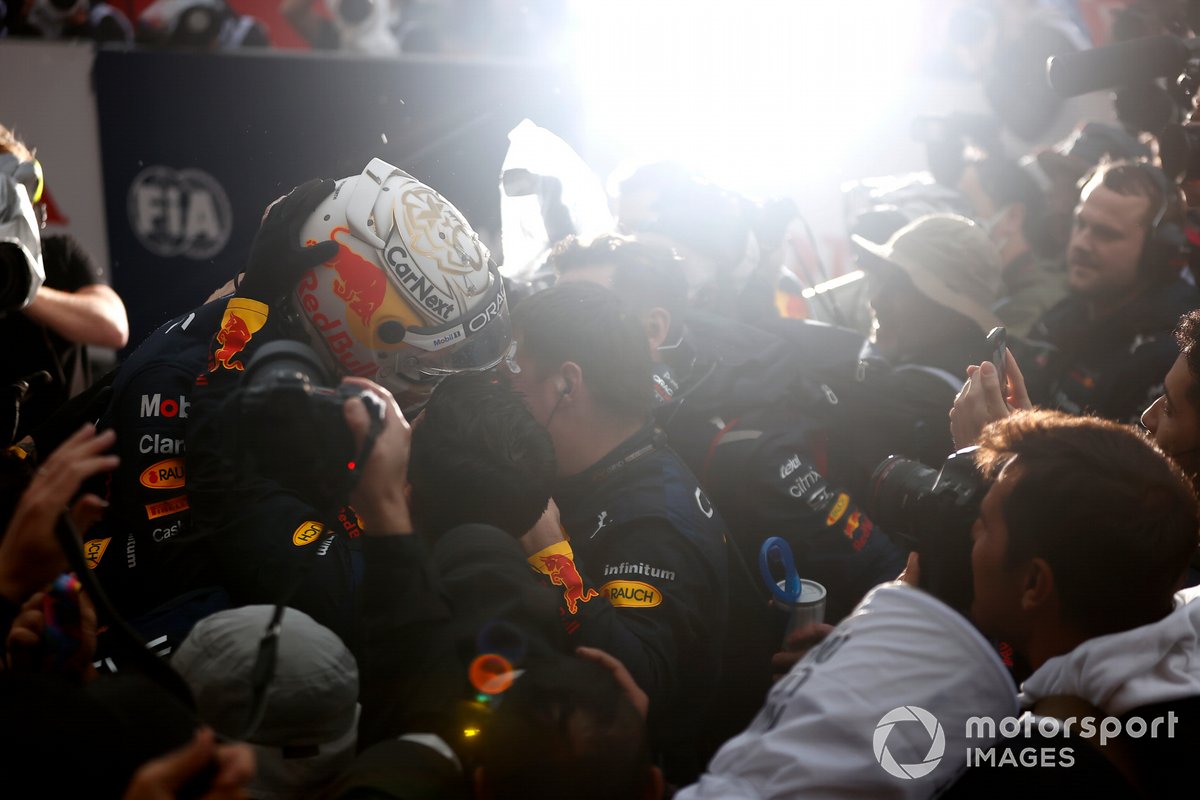 But the race was then finally scheduled to restart at 1615 local time with the cars, as before, on full wets for a rolling start with a little over 48 minutes remaining on the countdown timer.

As drivers held mixed opinions on visibility and track conditions, the safety car led an out-, full and in-lap before returning to the pitlane to leave Verstappen to keep clear of Leclerc.

Vettel and Nicholas Latifi dived into the pits to swap to inters but the Aston was released side-by-side with the Williams, before Lando Norris and Valtteri Bottas stopped a lap later.

With those runners setting fastest sectors, Verstappen headed Leclerc into the pits, but the Ferrari lost 1s to a sticky right-rear as Perez and George Russell were held by double stacks.

That left Fernando Alonso to inherit the lead over Daniel Ricciardo and Mick Schumacher but only the Haas driver, anticipating a safety car, did not pit for inters next time around.

Verstappen tore past Schumacher on the inside, but Leclerc lost 1.6s trying to demote the German to leave him 4.6s in arrears of Verstappen on the ninth lap with 31 minutes to go.

Schumacher remained a sitting duck, losing out to Perez, Esteban Ocon and Lewis Hamilton over the next tour before finally pitting on lap 12 having already dropped to 13th place. 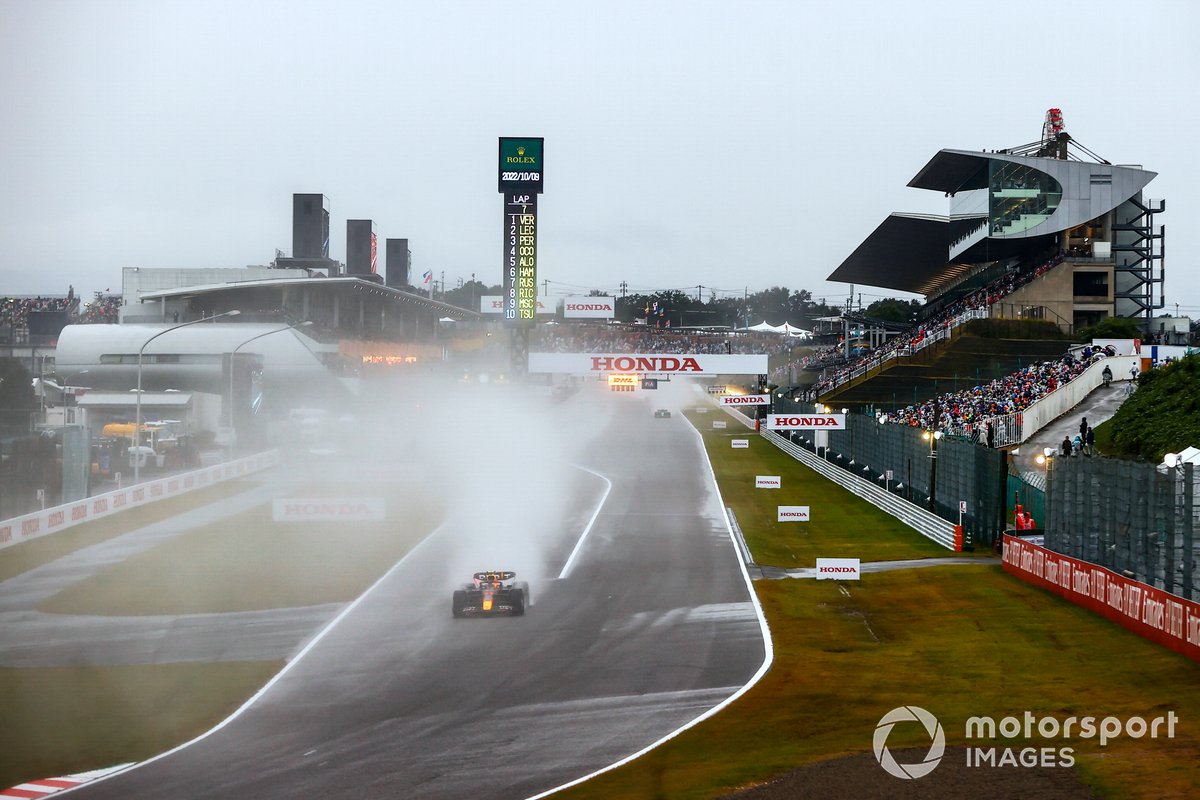 Verstappen continued to extend his lead with a clear road ahead to the tune of 1.5s per lap. Leclerc, though, seemed to particularly struggle as Perez was also circulating nearly 1s faster.

So, with eight minutes to run and with 243 laps completed, Verstappen held a 18s advantage as Perez was only 0.8s behind the sole Ferrari but despite a couple of chances, never passed.

Perez’s best attempt came when Leclerc missed the first part of the chicane only for the Monegasque to rejoin and squeeze Perez to the edge of the track on the sprint to the flag.

That order prevented Red Bull from pitting Verstappen late on for new inters for a shot at fastest lap, as the Dutch racer took the eventual victory an imperious 26.8s clear of Leclerc.

As such, without the extra point, Verstappen appeared set to miss out on his coronation until the United States GP, only for Leclerc to be handed a 5s penalty to drop behind Perez.

Verstappen only learned of his success in the post-race interview.

Behind the top three, passing came at a premium following the rush for inters that had previously jumbled the order. Ocon defended stoutly for fourth ahead of a chasing Hamilton. 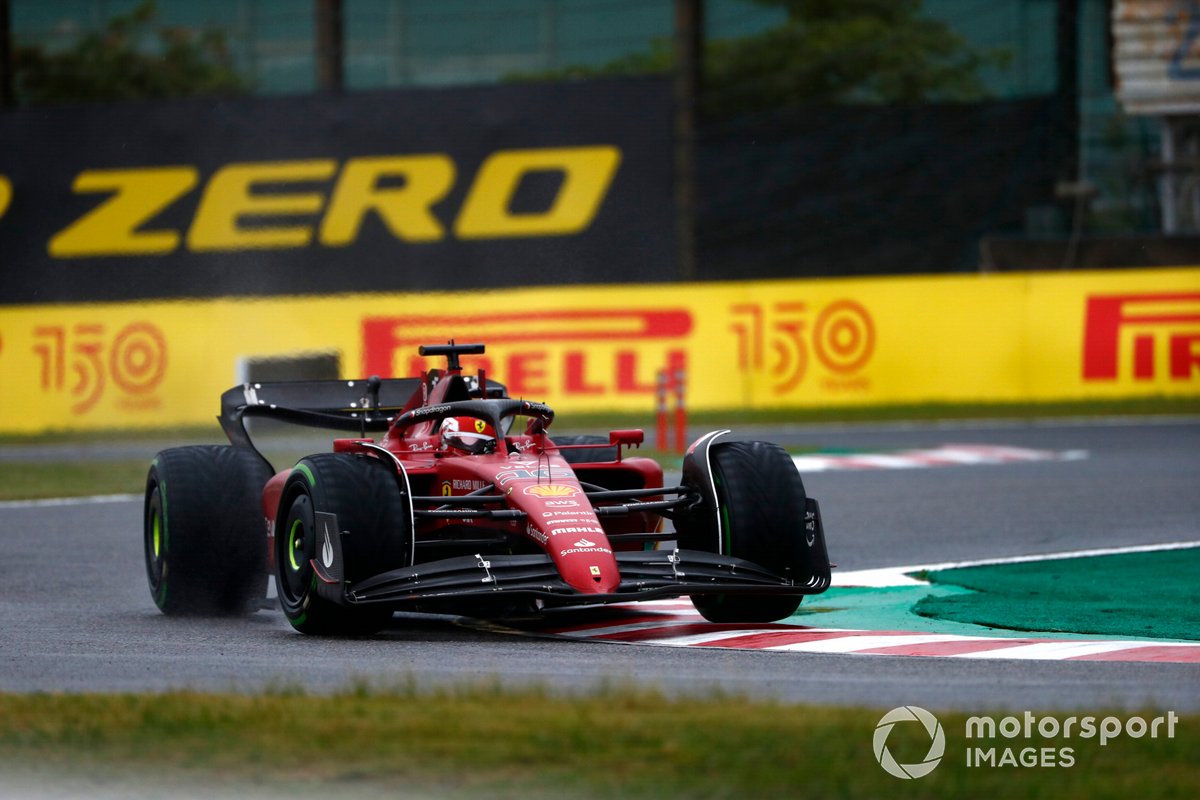 Vettel took sixth, having gained a position after Alonso made a late stop for inters to fall to 10th before climbing back up the order, as behind the Alpine ranked George Russell.

The Mercedes was one of few climbers but neatly passed Yuki Tsunoda, Norris and Latifi for ninth.