Despite failing to improve on his final run in Q3, Verstappen’s banker lap was quick enough to land top spot in qualifying as Leclerc just dropped a hundredth in the final sector.

That comes as victory and a bonus point for fastest lap with cement Verstappen’s second title.

In the climax to qualifying, Leclerc was the first of the pole contenders to begin his flying lap and duly improved on his personal best in the first sector before going quickest of anyone in S2.

But the Monegasque ran 0.01s down through the closing part of the lap to miss out by 0.009s, as Verstappen failed to improve in S1 and S3 after running wide and shedding some carbon.

Carlos Sainz, who had the legs on Leclerc earlier in the day, ran to third and was 0.06s down as Sergio Perez will complete the second row – four tenths down on his team-mate.

The Mexican had gone comfortably fastest in Q2 when Verstappen did not opt for a second lap but then complained of understeer to fall out of the fight for pole position.

Esteban Ocon ran to a strong fifth for Alpine as Lewis Hamilton led the subdued Mercedes attack in sixth over Fernando Alonso.

George Russell set the eighth-fastest time over Sebastian Vettel on his final F1 appearance at Suzuka, while Lando Norris rounded out the top 10.

There was a question mark hanging over the provisional polesitter; Verstappen, who set the pace in Q1, led the opening salvo in the final part of qualifying as he toured round in 1m29.304s to find an imperious quarter of a second over Leclerc and Sainz.

But Norris notably had to take evasive action early into Q3 as he had to take to the grass as Verstappen seemed to attempt to warm the tyres out of 130R and the RB18 stepped wide. 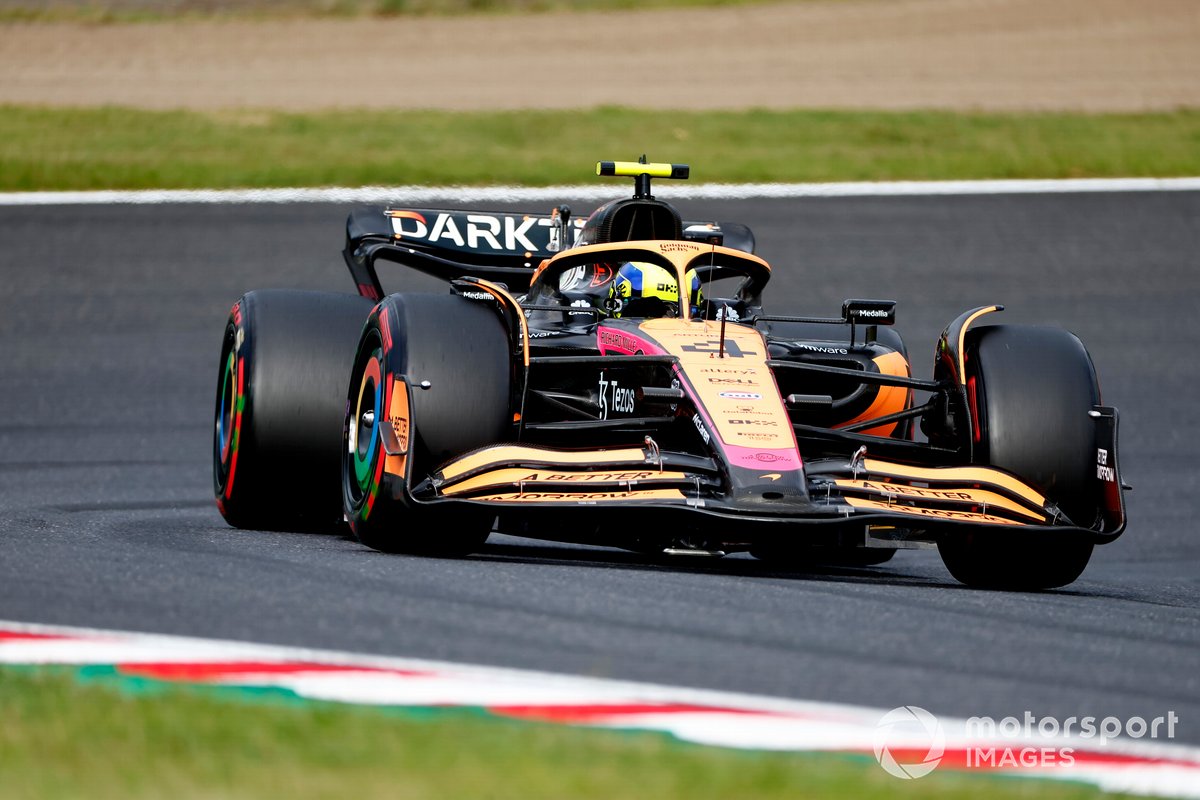 The Red Bull driver did repass Norris and appeared to raise his hand by way of an apology.

The incident took place when both were on an out-lap and was investigated post-session - but Verstappen ultimately kept pole.

Vettel ran out of sequence in the 15-minute Q2 to ensure clean air but he did leave himself at risk of being caught out by track position, but he initially climbed as high as fifth place.

While he was shuffled down to 10th to still make it into the shootout for pole as the improvements came, he kept ahead Daniel Ricciardo, who was eliminated in 11th.

The McLaren driver had looked strong on Saturday but missed the cut-off by a tiny 0.003s after failing to improve on his crucial lap, as largely determined by an iffy final sector.

Valtteri Bottas dropped time in the opening sector that he could not recover so failed to improve and will start the race in 12th ahead of home favourite Yuki Tsunoda.

Zhou Guanyu took the second Alfa Romeo to 14th, while Mick Schumacher was 15th - the German having the measure of his team-mate despite missing all of FP2 on Friday as the team changed the chassis on his car after he crashed the Haas on an in-lap in a wet FP1.

Aston Martin pilot Vettel had just about survived to fight on in Q2 after Alex Albon missed out on the top 15 by a slender 0.055s in the climax to the first part of qualifying.

The Williams racer had already had a lap time deleted for pushing track limits through the famous Spoon Curve. He was then the last to run over the line in Q1 but despite a personal best first sector, he dropped time in the middle part of the lap to ensure he was eliminated.

Struggles and major complaints from both AlphaTauri drivers over the AT03’s braking throughout the session meant Pierre Gasly was knocked out at the first time of asking.

The newly confirmed 2023 Alpine driver locked up through the hairpin, to his immense frustration over team radio, to run only 17th ahead of Kevin Magnussen in the other Haas.

Lance Stroll failing to improve on his final go with a lock up at the hairpin at a cost of four tenths landed him 19th, while Nicholas Latifi brought up the rear - the Canadian already down to serve a five-place grid drop for his crash with Zhou Guanyu in the Singapore GP.