Carlos Sainz topped an interrupted second practice for the Formula 1 Italian Grand Prix for Ferrari ahead of championship leader Max Verstappen in the Red Bull.

Sainz set his session-topping 1m21.664s lap after a brief red-flag period, taking over from Verstappen by 0.143 seconds, with the Dutchman having put in his soft-tyre time attack before the stoppage.

The second hour-long session at Monza on Friday got underway under glorious sunshine with most of the grid electing to run medium rubber.

Sainz set the initial pace with a 1m23.156s before Verstappen took over with a lap 0.135 seconds quicker than the Ferrari driver.

The Spaniard’s team-mate Charles Leclerc then moved to the top of the order with a 1m22.307s, but Verstappen would round out the first 10 minutes of action as the pacesetter with a 1m22.303s.

Alfa Romeo’s Valtteri Bottas sat in the garage for much of the first 10 minutes of the session but emerged towards the end of it as the first runner on soft rubber.

The Finnish driver – who is one of six drivers, including Sainz and Verstappen facing a grid drop for Sunday’s race – shot up to fourth with a 1m22.993s on his soft tyre lap.

With around 43 minutes of the session still to run, the track emptied as the rest of the field switched to soft rubber.

Verstappen’s first soft tyre lap was aborted when he ran wide into the first corner having locked up, forcing him to set his 1m21.807s on his second effort when the rubber was passed its prime. 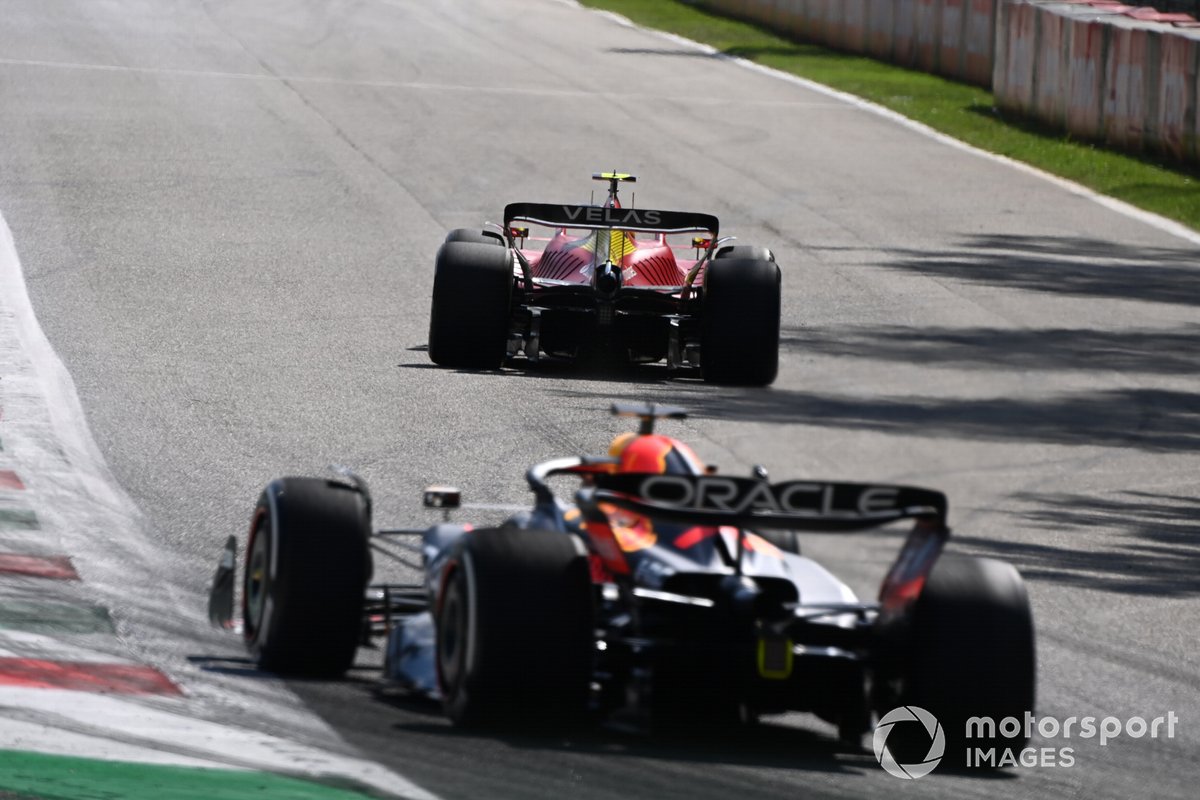 Just as he set that lap, a yellow flag was flown for Haas driver Mick Schumacher, who had stopped on track at the exit of the second chicane having reported engine issues.

This brought out a red flag while his stricken car was removed, with the track going green again with 25 minutes still to run.

The qualifying simulations resumed when the session got back underway, with Sainz firing in a 1m21.664s to knock Verstappen off his perch as the Red Bull driver switch back to mediums for a long run.

McLaren’s Lando Norris was fourth ahead of fellow Briton George Russell in the first of the Mercedes, while Sergio Perez completed the top six in the sister Red Bull.

Lewis Hamilton was seventh with a 1m22.503s in his Mercedes ahead of Alpine duo Ocon and Fernando Alonso, while Alex Albon – who ran off track exiting the Ascari chicane in the closing moments - rounded out the top 10 for Williams.

In terms of long run pace, Verstappen was 0.35s quicker on average on medium rubber than Sainz, while Leclerc on softs was 0.25s faster than the Red Bull.

Daniel Ricciardo was denied a place inside the top 10 by just under a tenth of a second in 11th in the second of the McLarens, with Alfa pair Zhou Guanyu and Bottas - who ran into the gravel at the second Lesmo late on - 12th and 13th from the two AlphaTauri’s of Pierre Gasly and Yuki Tsunoda.

Kevin Magnussen ended up 16th on his Haas ahead of the Aston Martin’s of Sebastian Vettel and Lance Stroll, with Williams’ Nicholas Latifi and Schumacher rounding out the 20-driver order.