At the start of the one-hour session, Nyck de Vries led the pack out of the pits, running a large aerodynamic measuring device behind the front wheels of Sebastian Vettel’s Aston Martin.

When the 2021 Formula E champion pitted before setting a timed lap – which he would not do until near the halfway point as Aston concentrated on its aero load data-gathering early-on – Haas’s Kevin Magnussen set the first place benchmark at a 1m27.185s.

This was quickly beaten by a slew of faster times – with Sainz, Esteban Ocon and Sergio Perez all enjoying brief stints in the top stop as the pack ran a range of tyre compounds during the initial running.

At the end of the opening runs, Verstappen moved into first place for the first time with a 1m25.830s set on the hard tyres.

Perez then edged back ahead with a 1m25.026s, also on the white-walled rubber, before Fernando Alonso moved into first next time by thanks to his 1m24.935s on the hards as well.

Verstappen’s opening run on his first set of hards continued and he ended the first 10 minutes in first place thanks to his 1m23.449s, which he beat twice more before there was a lull in activity ahead of the opening qualifying simulations – the benchmark down to a 1m22.853s.

Yuki Tsunoda had been the first driver to complete a flier on the softs before the lull around the 20-minute mark, but wound up over a second adrift of Verstappen’s best time on the hards.

When the action heated up again just before the halfway mark, Leclerc led the frontrunners in heading out on the softs and he immediately took the top spot from Verstappen with a 1m22.410s.

The Red Bull drivers went out on the softs a few minutes later, with Perez’s opening flying effort coming in well over a second adrift of Leclerc’s best.

Verstappen, who had a small lock up on his out-lap with his new softs at the track’s first chicane, looked set to beat Leclerc’s time before he encountered traffic in the final sector. 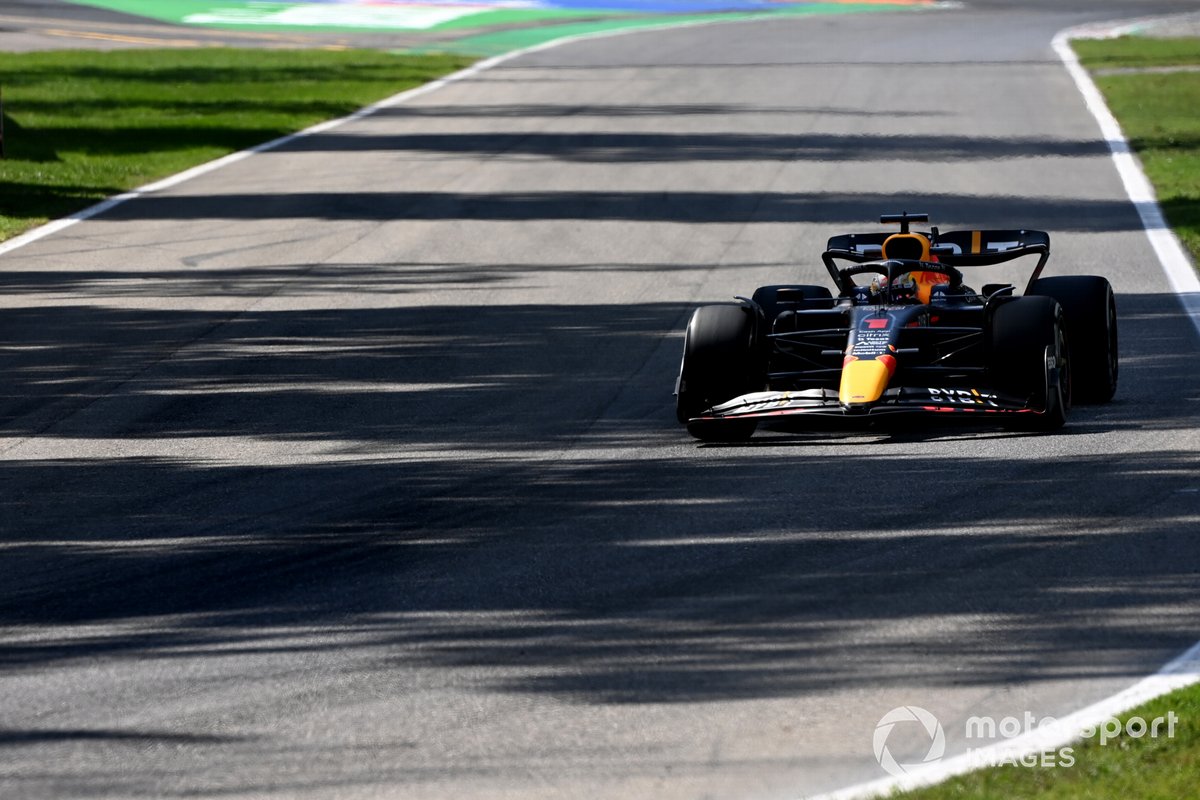 Lando Norris was running over four seconds off the pace still on the hard tyres when Verstappen caught him just before the Ascari chicane and the Briton did not move out of the Red Bull’s way and led him to finish.

There, Verstappen improved his personal best to slot into second, but lost 0.7s following the McLaren to go from being 0.3s up on Leclerc before he caught Norris to 0.4s behind.

The Mercedes cars were next up to have a go on the softs, with Russell ending up 0.5s behind Leclerc in third after having to pass by several slow-moving cars on the back straight at the end of his lap.

Hamilton’s first run on the softs initially left him only seventh and just over a second slower than Leclerc as he had to catch big slides exiting the second chicane and mid-way through the Ascari complex.

Russell then completed a second run on the softs to move ahead of Verstappen and close to 0.279s slower than Leclerc.

Hamilton then demoted Verstappen as well with a 1m22.831s, after Sainz had put in a time only 0.077s slower than his team-mate.

Sainz had been running an off-set plan compared to Leclerc after Ferrari had to work on his F1-75 in the pits following the opening laps, with Spaniard sent out again for an high-fuel run on the hards as Leclerc was putting in his flying lap on the softs.

But Sainz’s 1m22.487s nearly matched Leclerc’s time when he was finally able to complete an initial qualifying simulation run just before the session’s final quarter commenced.

Verstappen head out again on the softs during the closing stages, but only completed high-fuel running well off the pace and so his fifth-place result was cemented.

Ocon finished sixth ahead of Tsunoda, whose subsequent later run on the softs meant he closed to 0.850s off Leclerc.

Valtteri Bottas and Daniel Ricciardo closed out the top 10, with Norris down in 16th in the other McLaren.

De Vries finished with the 19th best time ahead of Williams driver Nicholas Latifi, with the Aston rookie having a brief off through the Ascari gravel during a late flier.

Several teams – including Red Bull – ran different rear wing specifications as they began to work out the best set-up for Monza’s long straights.

Perez’s rear wing was also spotted oscillating wildly as he ran down the main straight during the early laps, with Red Bull working on the issue, which also appeared in the early rounds of the season, throughout the rest of the session.