Valtteri Bottas led a Mercedes 1-2 ahead of Max Verstappen in the second Formula 1 practice session for the 2021 Hungarian Grand Prix as the Red Bull driver battled understeer.

The Finn bolted to the top of the times towards the halfway stage of the one-hour stint when he ran to a 1m17.012s benchmark on soft tyres to put himself two hundredths clear.

While Hamilton was able to recover time through the final sector compared to his team-mate, a quicker opening half of the lap from Bottas ensured he remained on top as the times dropped by 1.2s when the field switched to the fastest compound of the weekend.

Verstappen - the pacesetter in FP1 ahead of Bottas - ran to third on his quickest lap but was two tenths adrift of Bottas as the Red Bull driver complained of persistent understeer.

Carlos Sainz Jr and Kimi Raikkonen - the latter on the sidelines for FP1 as Robert Kubica took the Alfa Romeo - had been the first to head out, with the Ferrari racer initially setting the pace with a 1m21.084s on hard tyres.

But he was swiftly deposed by team-mate Charles Leclerc, his car shod with the medium compound, by a seven-tenth cushion before the Alpines came to the fore, led by Fernando Alonso.

However, the session then settled down after five minutes when Bottas moved comfortably fastest on the medium tyres with his 1m18.376s effort.

He was joined by stablemate Hamilton, the seven-time world champion three tenths in arrears, with the two Red Bulls yet to leave the pits for an installation lap.

They stayed away for another three minutes before splitting the Silver Arrows duo, Verstappen running second and Perez in fourth but with the fastest final sector.

Bottas then found another 0.15s through the last section of the lap to improve his margin at the front of the pack until he was knocked down a peg by Hamilton’s 1m18.140s attempt.

Hamilton remained the pacesetter in the opening 20 minutes and on the medium compound before the switch to the softs. 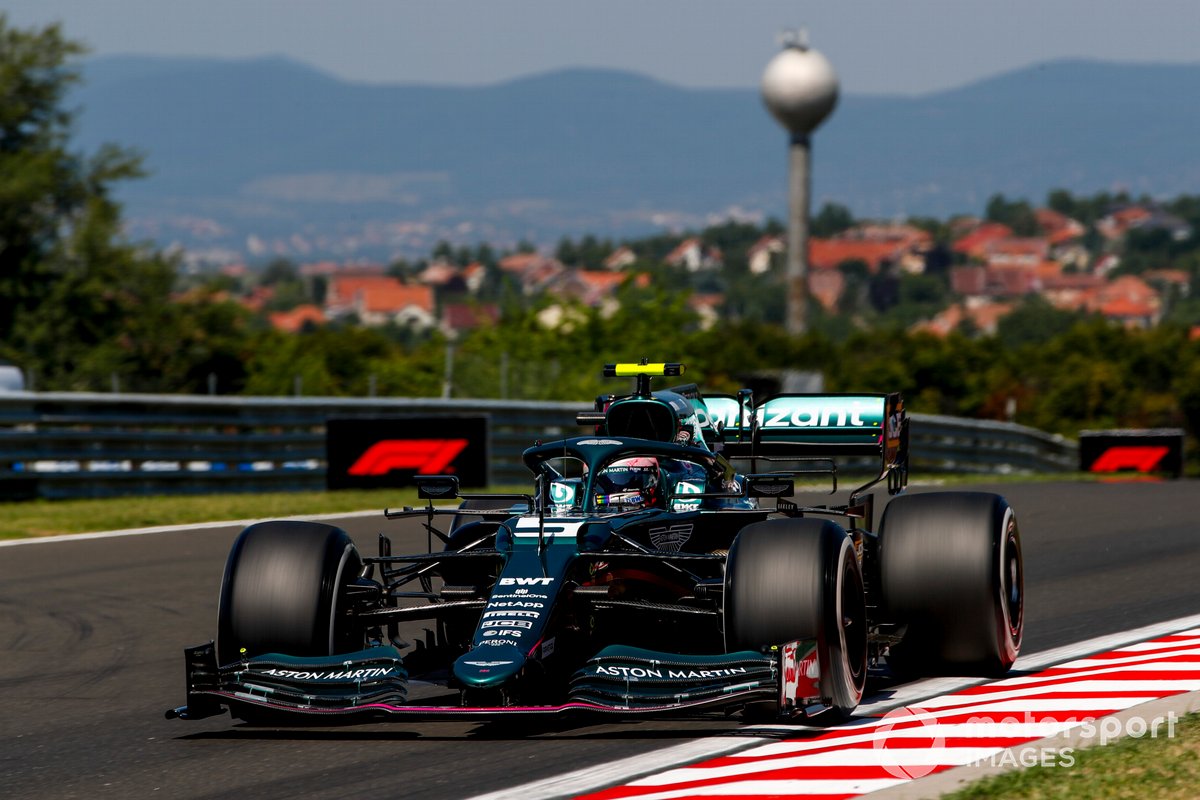 Vettel became the first driver to set a flying effort on the red-sidewall tyres, running to second by 0.08s behind Hamilton in a rapid-fire one-lap stint for the Aston Martin.

Esteban Ocon held on to fourth place from his soft tyre run after the switch to race simulations, but the Alpine driver had been required to stop by the pit garage after tape had come loose around the car’s sidepods and airbox during the early laps.

Perez, meanwhile, rounded out the top five, running sixth tenths slower than team-mate Verstappen, while ending up ahead of the AlphaTauri machine of Pierre Gasly.

Alonso ran to seventh as Vettel was soon demoted down to eighth over the McLaren Racing machine of Lando Norris.

The Brit was 1.3s off the pace in a session where he was forced to abort the Turn 6-7 chicane after the rear of his car was unsettled by a cross wind and he had to dive for the run-off area to correct the oversteer.

Hamilton soon after was forced into similar avoiding action through Turn 11, with the car again snapping at the same corner with nine minutes to run.

Lance Stroll completed the top 10 in his Aston Martin while the Ferraris, led by Leclerc, who suffered a sizeable lock-up early on into Turn 1 and was forced out wide, pipped Sainz.

Nikita Mazepin, who had his session stymied by a right-rear slow puncture and did not post a soft tyre flying lap, ended up slowest after running for 27 laps.

He was beaten by Yuki Tsunoda, running to 17th, who made it across the line for one soft tyre run with fewer than 30 seconds to go.

The Japanese racer had sat out almost the entire session following his high-speed free practice one crash in which he lost the rear through Turn 4 and shunted the rear into the tyre barrier.