Perez beat polesitter Ferrari’s Charles Leclerc to the first corner and dominated the race until the intermediate-shod field switched to slick tyres.

Perez then encountered engine issues that helped Leclerc to attack in the closing laps, but an error from Leclerc dropped him two seconds behind, after Perez had sorted out his engine settings.

However, Perez faces a post-race stewards’ investigation for a safety-car infringement.

Red Bull’s Max Verstappen suffered a poor start, which forced him to charge through until he made an error trying to pass McLaren’s Lando Norris and dropped to last place. He recovered to finish seventh.

How the Singapore Grand Prix unfolded

After a delayed start due to torrential rain, the field all started on intermediate tyres.

Perez made a great getaway and passed poleman Leclerc on the run to Turn 1, while Sainz took third from Mercedes’s Lewis Hamilton at the first corner after a brush of wheels before the apex of Turn 2. Alpine’s Fernando Alonso, making his 350th F1 start, ran sixth behind Norris.

Further back, Verstappen made a dreadful start and cut the inside of Turn 1, dropping back to 12th on the opening lap from eighth on the grid, but he quickly charged his way back into the top 10 by lap two.

Nicholas Latifi (Williams) clobbered Zhou Guanyu (Alfa Romeo) into the wall approaching Turn 5 on lap seven, which brought out the first safety car to retrieve the stricken Alfa. Zhou’s team-mate Valtteri Bottas was also in the wars as he was clattered into by George Russell’s Mercedes, who started from the pitlane after an engine change.

Perez maintained his lead at the rolling restart on lap 11, as Verstappen passed the Aston Martin of Sebastian Vettel and Pierre Gasly’s AlphaTauri to run seventh. Verstappen then got stuck behind Alonso until the Spaniard’s engine failed on lap 21, which caused a virtual safety car for a couple of laps to deal with his car.

Russell gambled on pitting for medium-compound slicks at this point but was woefully slow as he struggled to keep temperature in them.

The returning Alex Albon, who spun his Williams into the wall on the opening lap, found the wall again at Turn 8 on lap 26 and lost his front wing against the barriers, causing a second virtual safety car. A third quickly followed as Esteban Ocon’s Alpine expired on lap 28. 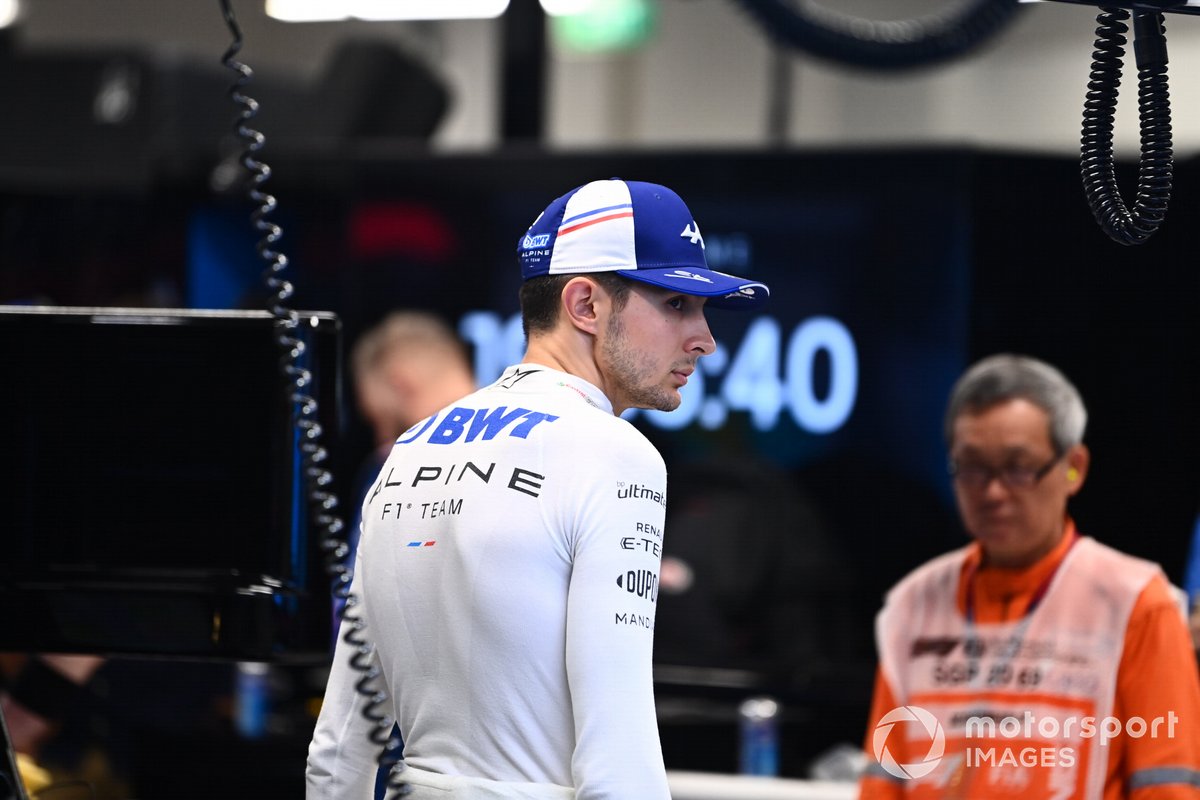 Verstappen almost hit Norris at Turn 7 before the restart, and then attacked him hard for fifth place. Hamilton went off into the tyres at Turn 7 on lap 33, rejoining between Norris and Verstappen, but sustained front wing and endplate damage.

Leclerc pitted for medium slicks on lap 35 as soon as Russell set a fastest lap, as did Hamilton for a new nose section – dropping him to ninth. Perez responded in kind a lap later, as did Sainz and Verstappen.

Yuki Tsunoda then crashed his slick-shod AlphaTauri at Turn 10, causing the second full safety car, and Norris took advantage to make his stop for slicks.

The race went green again with 35 minutes remaining in what was now a timed race, with Perez leading Leclerc, Sainz, Norris and Verstappen. Daniel Ricciardo had jumped up to sixth in his McLaren, but opted for soft-compound slicks.

Verstappen attacked Norris into Turn 7 but locked up and blew the corner, rejoining ahead of Hamilton in eighth but with huge flatspots and was forced to pit for soft slicks. He rejoined in last position, but gained one spot when Russell hit Mick Schumacher’s Haas and suffered a puncture.

On slicks, Leclerc looked far more racy than previously, just as Perez reported engine issues. DRS was enabled, further helping Leclerc as he attacked for the lead in the closing stages.

As he looked poised to pass, Leclerc made a mistake and dropped out of DRS range, as Perez fixed his engine settings and pulled away. But Perez was facing an investigation from stewards for a safety-car infringement and pushed flat out to the finish to ensure his victory margin was over 5s, just in case.

Sainz finished a distant third, ahead of Norris and Ricciardo. The Aston Martin of Lance Stroll was next up, while Hamilton gifted a spot to Verstappen when he overshot Turn 8 trying to pass Vettel. Verstappen then passed Vettel on the final tour to grab seventh.