At the start, Leclerc easily lead away from pole ahead of Verstappen, who initially looked like he would have to defend against Hamilton into Turn 1 as the Mercedes driver had launched straight past Sergio Perez up ahead and starting third.

But Verstappen hit the brakes latest of the top three and ran to Leclerc’s outside, but the Ferrari was under no real pressure on the racing line.

The top two immediately pulled clear of Hamilton – exchanging fastest laps as they did so.

As soon as DRS was activated on lap three, Verstappen – who was already able to catch Leclerc on every straight with his lower drag, skinnier rear wing – really began to pressure his rival, who appeared to be struggling for rear tyre grip.

Verstappen closed the gap to a minimum of 0.5s at the start of lap eight of 53 as he twice got so close running into Le Beausset he looked to attack on Leclerc’s outside.

But the Ferrari’s higher downforce, larger rear wing meant Leclerc was able to pull away through the technical sections at the start and end of the laps and a tense stalemate developed with Verstappen falling back towards one-second adrift over the next few laps. 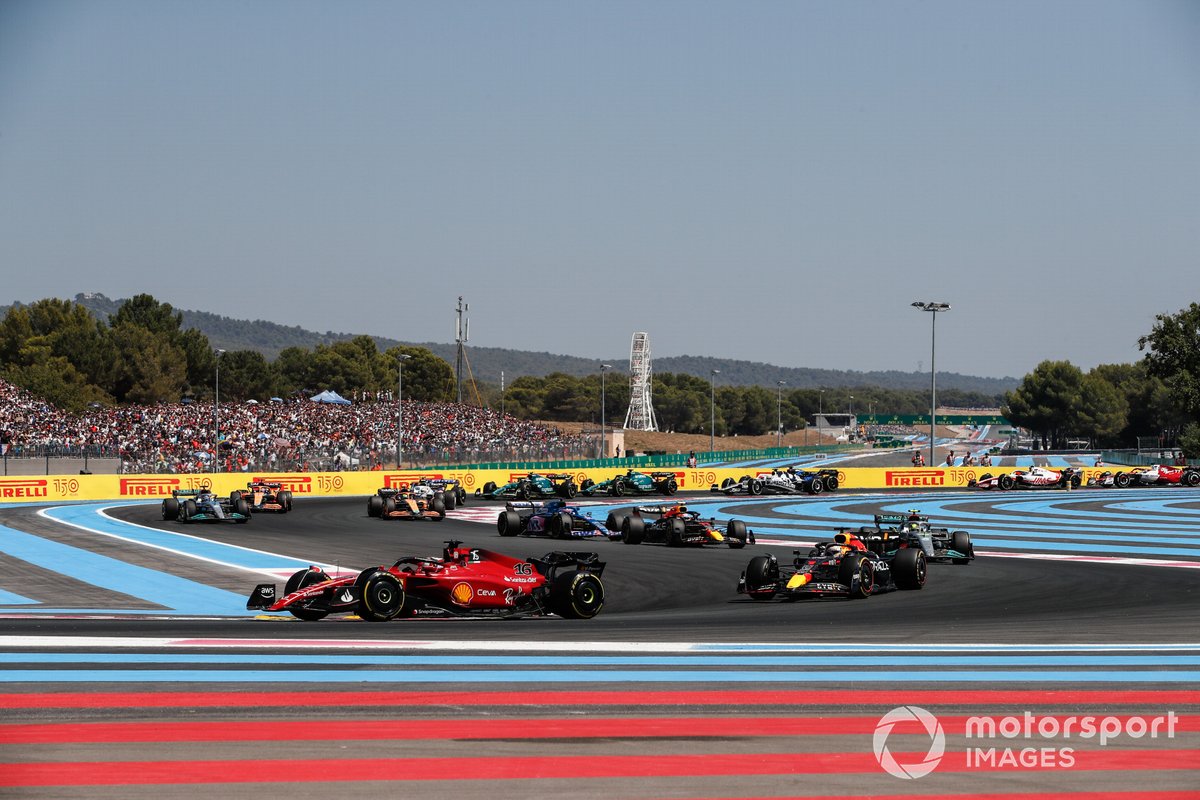 The Dutchman was now the one seemingly struggling for grip as at one stage he slipped off the road at Turn 6, so picking up his first track limits violation, and by lap 14 he had had fallen out of DRS range as Leclerc began to increase his pace back towards where he had been lapping in the early stages.

Leclerc’s lead was heading up towards 1.5s when Red Bull called Verstappen in at the end of lap 16 to switch to the hard tyres.

Ferrari, which had told Leclerc it was considering a “Plan B” strategy and that the harder tyres team-mate Carlos Sainz was running down the order after his engine-change grid penalty were still suffering from thermal degradation, did not move to immediately cover Verstappen’s stop.

But just after it had warned Leclerc to look after his mediums, the race was turned on its head when Leclerc crashed out at Le Beausset – losing the rear of his F1-75 in a mistake while running close to the edge of the track deep into the high-speed hairpin on his stressed rubber.

He rapidly spun around and went straight on into the barriers, where he fumed “I cannot go on throttle” before screaming in realisation that he was out of the race.

The incident was covered by a safety car, where Hamilton, who had seen off Perez’s early attentions to run well clear of the second Red Bull before Leclerc’s crash, led a mass visit to the pits.

He rejoined behind Verstappen and still ahead of Perez, with George Russell, Fernando Alonso and the two McLarens following in the queue ahead of Sainz. 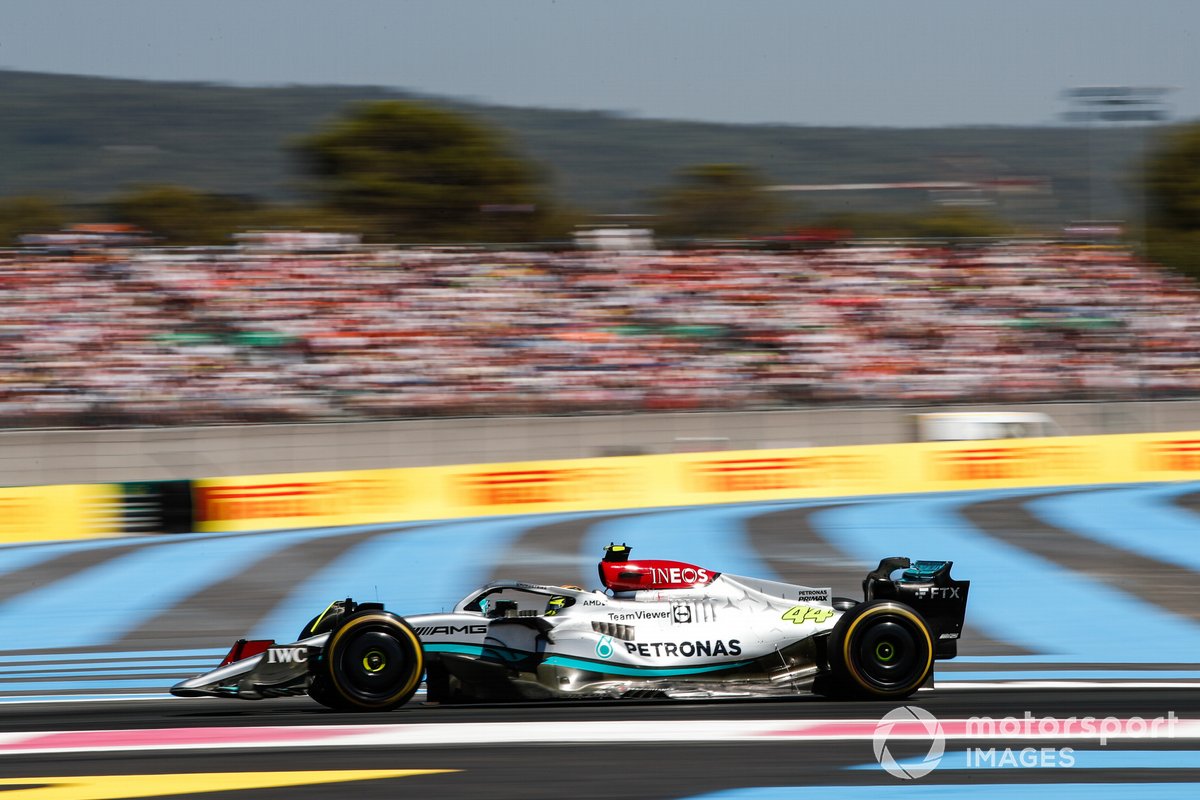 He had risen up the order from his back row start in the early stages, but picked up a five-second penalty after his slow safety car stop ended when was released into the path of Alex Albon’s approaching Williams.

At the restart on lap 21, Verstappen easily raced clear of Hamilton and was soon in complete command up from, while the Mercedes again pulled away from Perez.

The main action in the pack was Sainz’s continued recovery drive, as he jumped by Daniel Ricciardo at Turn 1 at the restart and got Lando Norris into the Mistral straight chicane further around the lap.

On the next tour he got ahead of compatriot Alonso and then set off after Russell, who then frustrated the remaining Ferrari’s progress for several laps before the Briton’s defence at the Turns 8/9 chicane meant Sainz got a better run up the hill to Signes, where he thrilling got ahead with an around-the-outside pass.

Up front, Verstappen continued to pull clear of Hamilton and his lead had reached four-seconds by lap 32, before it soon shot up to nearly seven – mainly thanks to his pursuer subsequently having to catch an oversteer snap through the second corner and ran off the track.

From there, Verstappen was untroubled to the finish and came home with a 10.5s margin of victory ahead of Hamilton, who was likewise unthreatened in second – this was despite a brief moment of worry for the leaders when Zhou Guanyu stopped in the Turn 6 runoff and triggered a brief virtual safety car.

Their advantage up front was because after his Signes pass on Russell, Sainz had closed in on Perez and pressured the Mexican driver hard for several laps as Ferrari dithered over whether to bring him in for a second time – knowing If it did he would his penalty applied tyres could be changed. 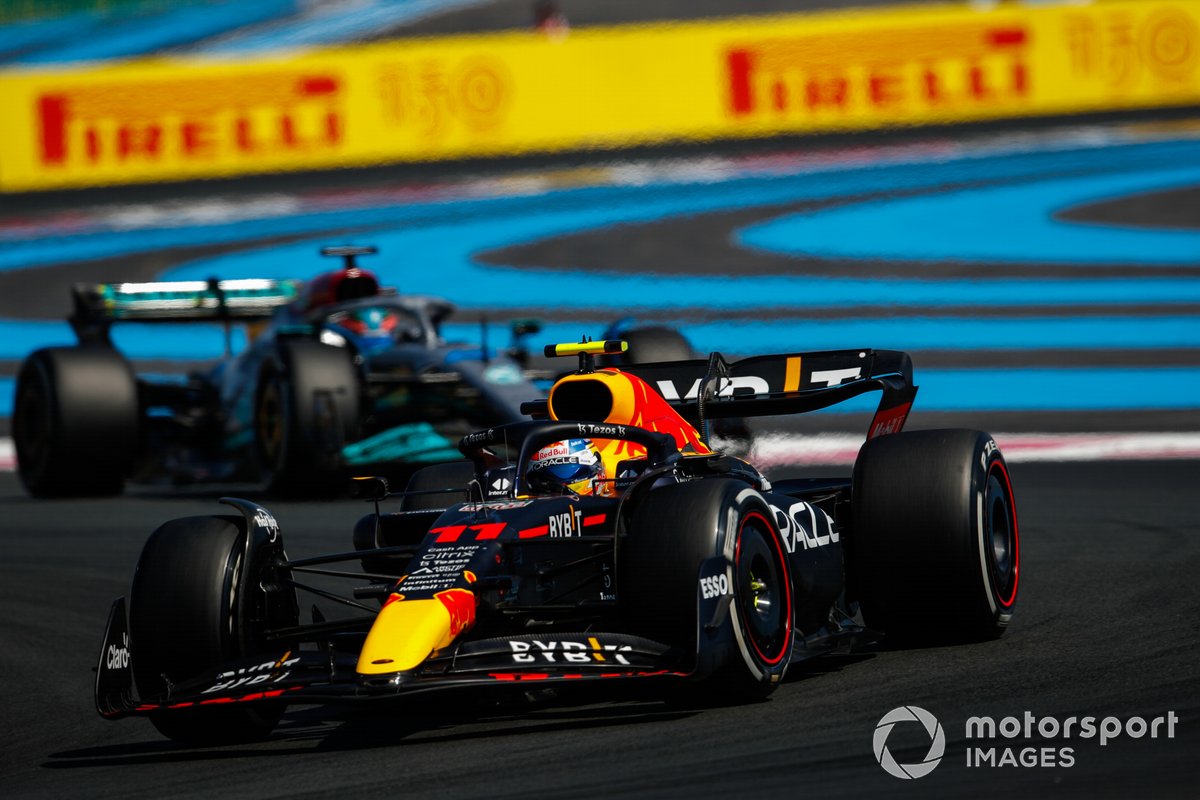 Both team and driver changed their minds on whether to come in our not, but Sainz was still out by lap 41 and he was running right behind Perez – attacking at Signes and then staying close enough to dive ahead at the final corner.

Ferrari had called him in mid-way through their scrap, but Sainz dismissed the call and shot clear – having pulled Russell along in his wake so the Mercedes was then in position to attack the grip-less Perez.

On lap 42, Russell made a late move to the inside of the Turn 8 part of the Mistral chicane and when Perez turned in the pair came close to crashing before the Red Bull scampered across Turn 9 and stayed ahead – to Russell’s frustration but with the stewards’ quickly deciding the incident did not merit investigation.

But straight after this, Ferrari then ultimately did bring Sainz in for a second stop and he re-joined ninth and with a near 30s gap to try and recover – as well as repass the Norris and Alonso.

He did so quickly and showed searing pace on his way to setting the race’s fastest lap, but came home a frustrated fifth.

That was behind Perez, who lost out to Russell after the Mercedes driver jumped ahead of the Red Bull when the VSC ended as they approached the final corner and then soaked up pressure over the final three laps to seal third.

Sainz ended up 11.5s behind Perez, but well clear of Alonso and Norris, with Esteban Ocon eighth after hitting Yuki Tsunoda at the Mistral straight chicane on lap one and getting a five-second penalty he served at his safety car stop for spinning the AlphaTauri around.

Ricciardo took ninth and Lance Stroll got the final point, despite Sebastian Vettel getting very close to nipping ahead on the last lap – with the chasing Aston Martin appearing to nearly hit the other when it was slow getting off the final corner’s apex.

The other non-finishers were Nicholas Latifi and Kevin Magnussen who retired in the pits shortly after they clashed at Turn 2 in the closing stages, just after the Williams had attacked the Haas at the preceding Turn 1 in an incident that will be investigated now the race has finished.

Tsunoda stopped on the same lap as Leclerc’s crash as a result of the floor damage he had picked up in the lap one clash with Ocon that had dropped him to the rear of the pack.