Leclerc surged to the top of the times in the final third of the hour-long FP1 to eclipse his chief championship rival by a slender 0.09s as Carlos Sainz completed the top three.

George Russell, meanwhile, ran to fourth in the Mercedes W13 - which this weekend debuts a revised nose cooling duct - as track temperatures crept towards 60 degrees Celcius.

It had been Verstappen that comfortably set the pace during the first round of quick laps, the Red Bull driver sitting half a second clear of his team-mate courtesy of a benchmark 1m34.991s effort.

It had been Sainz that led Robert Kubica, replacing Valtteri Bottas in the Alfa Romeo, and Zhou Guanyu out onto the circuit with the Ferrari driver initially clocking a 1m39.577s lap.

But that was swiftly brought down by Kevin Magnussen and then Lando Norris, who posted a 1m37.604s despite complaining of a spongey feeling throttle pedal.

Verstappen then circulated to his 1m34.991s to end the opening gambit on top, initially extracting 1.1s over Perez to allow an improved Leclerc to swiftly split the Red Bull pair.

Leclerc, who sits 38 points adrift of Verstappen, was then immediately relegated by Perez, the Monaco GP winner responding to the Scuderia threat by closing to within 0.5s of his stablemate.

But the Mexican would soon suffer a high-speed spin at Turn 3 when he collected too much inside kerb to unsettle the car, locking all four tyres as he slowed to narrowly miss the wall.

After a mid-session lull, with 30 mins to run Verstappen emerged with a shiny new set of soft Pirellis to lower the times to 1m34.346s thanks to a particularly strong first sector. 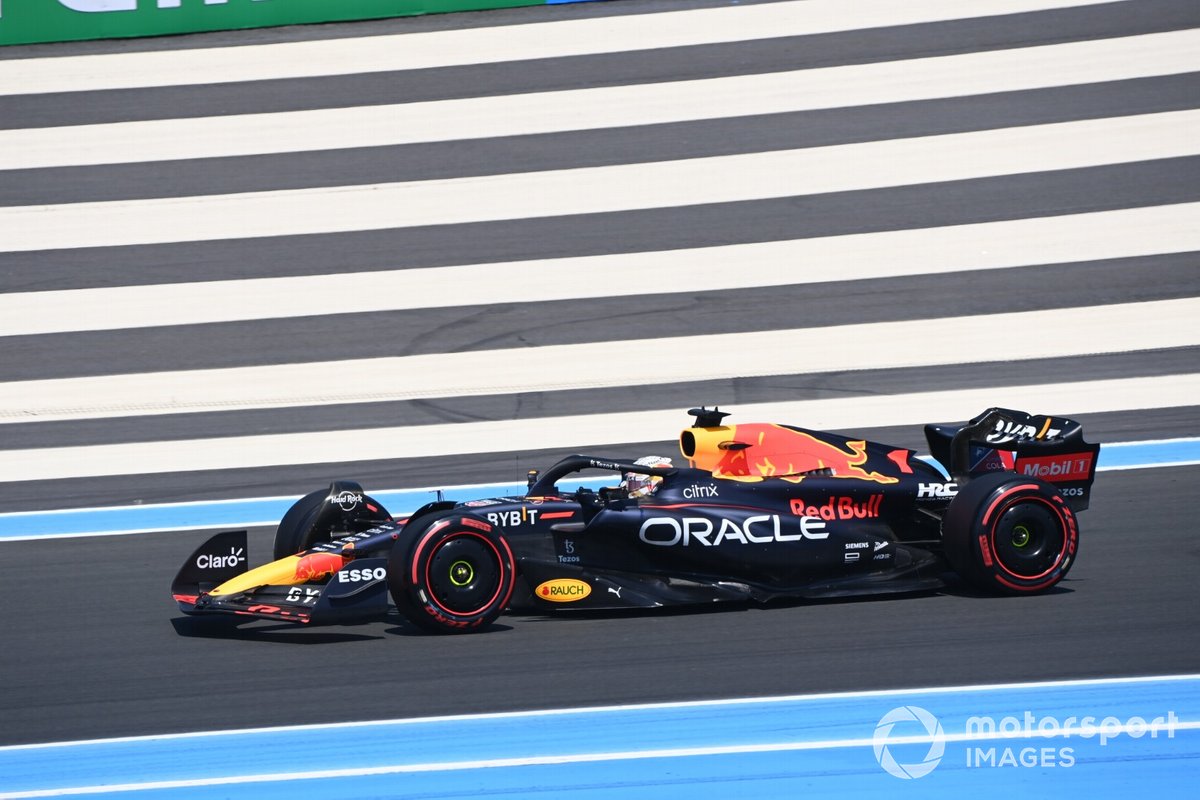 But Ferrari soon found an answer as Sainz buzzed the line in 1m34.268s to find eight hundredths over his Red Bull rival, the F1-75 doing its heavy lifting in the final sector.

Verstappen responded with 21 minutes to go, planting a 1m34.021s yardstick but he left time on the table by running wide over the Turn 12 exit kerb after suffering understeer on turn-in.

The Dutch ace would also note slow gearshifts, although this appeared to be linked to him clattering the kerbs out of Turn 8-9 chicane.

Those brief moments left the door ajar for Leclerc to nail a 1mm33.930s – the only driver to lap under the 1m34s.

With drivers sticking to the now scrubbed Pirellis for the remainder of the hour, the Monegasque preserved his 0.09s advantage over Verstappen to claim the first bragging rights.

Sainz ended up 0.3s off his pacesetting team-mate and will now endure at least a 10-place grid penalty after taking his third control electronics package of the season.

Surpassing the upper limit of two as a legacy of his catastrophic Austria GP engine fire, like Leclerc at Montreal, a further hit could come his way should Ferrari change more engine parts as the event wears on.

Russell, meanwhile, was best of the rest in fourth. The Briton ran 0.9s adrift with the W13 notably lifting its inside wheel as a result of the stiff set-up to combat porpoising.

Pierre Gasly put the first significant upgrade of the campaign for AlphaTauri to good use by running to fifth and pipping Perez.

It continued to be a messy session for Mexican, who straightlined the chicane and had to briefly stop at the Red Bull garage after his visor tear-off was caught in the right-rear suspension.

The RB18 also sports modifications for Paul Ricard, thanks to a revised floor - with Adrian Newey getting on his hands and knees to inspect Verstappen’s bargeboard late on.

Norris ran the tweaked McLaren (notable for its new sidepods) to seventh ahead of Alex Albon’s Williams, while Formula 2 and Formula E champion de Vries ended up ninth - having ran wide early on to risk floor damage.