The FIA has finalised a package of Formula 1 aero regulation changes for 2021, creating an overall downforce cut of around 10%

Around half of that figure had already been accounted for by a change to the floor rules agreed earlier this year.

However the British GPs prompted the FIA and F1 to make further changes to assist with Pirelli's plans to run the same tyres for a third consecutive season by decreasing downforce.

These further changes will include the removal of further slots in the floor, along with a reduction in size of the winglets positioned on the rear brake ducts.

There will also be further changes to the diffuser geometry to further limit the downforce produced in 2021.

Outlining the three new changes in detail Tombazis said: "We will eliminate some slots on the side of the car, on the edge of the floor.

"The rear brake duct winglets, this cascade that lies at the bottom of the brake ducts, we will make that 40mm narrower.

"And the diffuser fences that currently a few of them, the ones that are further in-board and go down to the reference plane, will be limited to the step plane.

"They will hence be chopped up by 50mm."

Some of the changes were already discussed earlier in the year before a change to the floor was agreed upon, and they have now been revived.

"We discussed some of them back in April in May, and then we went just for the floor change," said Tombazis.

"But as the season progressed, and we saw what downforce the cars are producing, we thought we probably needed to go an extra step. 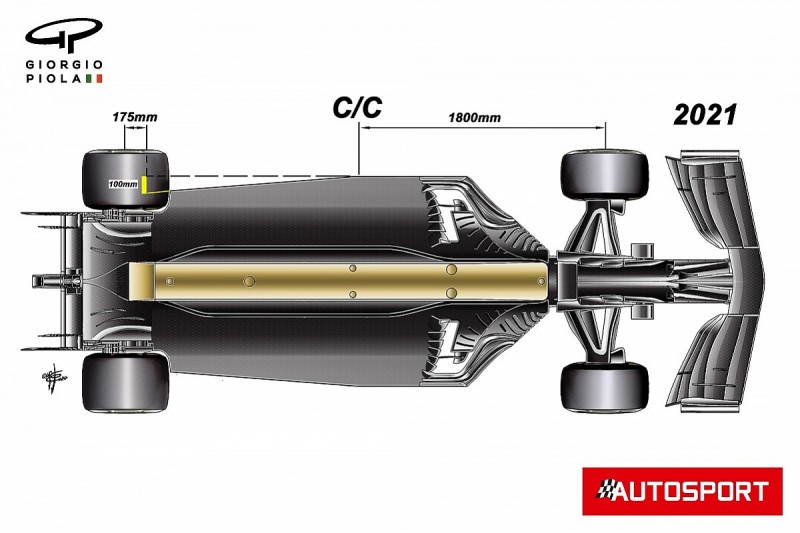 "Now our criteria for the selection of the areas where we are changing, also involves the cost considerations, especially for the smaller teams.

"We're not changing anything towards the front of the car, because if you change even something small on the front wing, it can have a knock-on effect on the rest of the car.

"And for example, the floor trim that we had already affects the rear brake duct, and hence the rear brake duct being made a bit narrower, they have to make a new one anyway, and therefore it's keeping costs and the amount of re-optimisation to sort of sensible levels.

"We think that the sum of these changes is approximately 4-5% of the overall downforce the cars have.

"And we of course have made this diagonal trim on the on the floor edge already from May. The total, I think, we expect maybe about 10% reduction.

"And clearly teams will be gaining approximately 4-5% through their normal development - we don't know the exact effects, but these are estimates."

F1's chief technical officer Pat Symonds said that the FIA and F1 had put a lot of time and effort into selecting which changes to make.

"I think we've done a very thorough job on this," said Symonds.

"We've done a lot of simulation. We've looked at a lot of different options, not just the four, including the floor trim, that have finally been selected.

"And above all, we, in the knowledge of let's call it different aerodynamic design philosophies, we've tried really hard to select items that will not either favour or disadvantage any particular team."