Formula 1 drivers backed the decision to resume Sunday’s Azerbaijan Grand Prix for the final two laps with a standing start from the grid.

Race leader Max Verstappen suffered a tyre failure at high-speed with four laps remaining, with the subsequent crash leaving debris strewn across the track that resulted in a red flag.

While the track was cleared, race director Michael Masi announced the race would be completed, setting up a two-lap sprint from a standing restart.

It marked the latest point in a race that F1 has used its new grid restart rules for red flag following its first appearance at Monza last year, with Masi later saying there was “no reason not to” resume the race.

AlphaTauri’s Pierre Gasly welcomed the decision to restart the race after fighting into third place, joking that American owners Liberty Media would have been happy with the entertaining end.

“The Americans took over so I wasn’t really surprised that we go first with the entertainment!” Gasly said when asked by Autosport about the decision for a standing restart.

“No, I was quite happy. It always brings a bit more excitement. It creates some sort of adrenaline inside you. I knew there would be some opportunities because you start only for two laps, everybody is a bit like lions out of the cage.

“Everybody goes for everything and tries to make up as many positions as they can in a very short time. I didn’t see the replay of the last two laps, but I must say on my side it was very intense, I really enjoyed it.

“If anything, hopefully in the future they will do the same.” 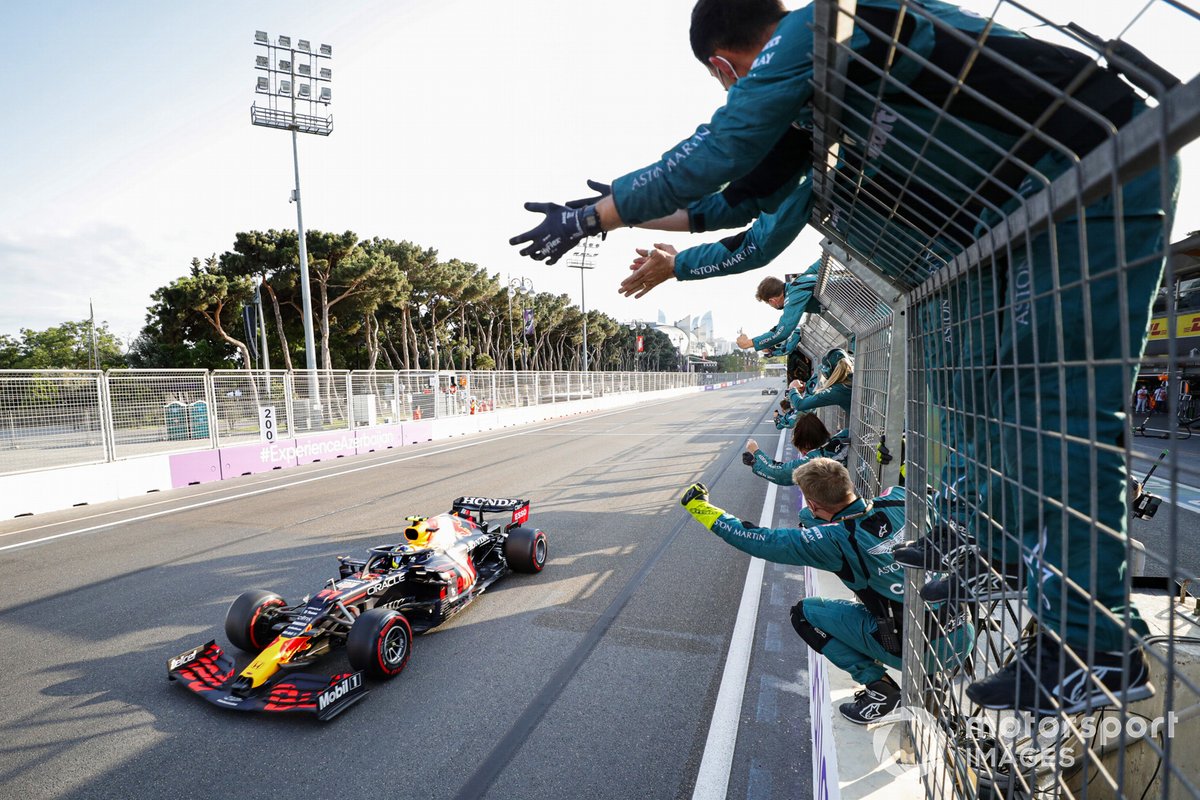 Sergio Perez, Red Bull Racing RB16B, 1st position, is cheered over the line by members of the Aston Martin team

Sergio Perez started on pole for the restart, and was able to clinch the race win after Lewis Hamilton ran off at Turn 1 after briefly taking the lead off the line.

The Red Bull driver was happy with the restart rule, believing there had to be consistency in how it was applied.

“In Imola we didn’t do it, we didn’t have the standing start,” Perez said.

“I think it was a bit unfair with the rain there, the right-hand side of the track was damp.

“As long as we keep it consistent, going forward, it certainly helps the fans to be sticking to the TV.

“They have the most enjoyable two laps of the race. They certainly made it very hard for me.”

Fernando Alonso was one of the biggest winners from the standing restart, charging from 10th on the grid to finish sixth and secure his best result since returning to F1.

“I think it was fun, people being very aggressive on those two laps knowing that you don't need to take care of the tyres or anything. That was fun.”

But Sebastian Vettel felt that races had become “more and more focused on creating a show”, and warned F1 could not move away from its traditionalist roots.

“I hope that in the future the races are more exciting,” Vettel said.

“I think it was probably an exciting race for various things happening and so on, but we just need to watch out that it doesn’t become too artificial and we don’t lose the roots of the sport.”