Lewis Hamilton says he does not consider himself as worthy of a knighthood as other "unsung heroes", despite his record equalling seventh Formula 1 championship title

The Mercedes ace secured another drivers' crown in Turkey last weekend, as he matched the feat that has only ever been achieved by Michael Schumacher.

His success has prompted renewed calls for Hamilton to be given a knighthood, with Motorsport UK and a group of MPs having written to prime minister Boris Johnson urging him to be put on the New Years' Honours List.

Interestingly, the British royal family's official Twitter account did post a congratulatory message to Hamilton after his success - fuelling suggestions he was being considered for an award.

Congratulations to record-equalling seven-time @F1 World Championship title winner @LewisHamilton - along with a record number of race wins, what an incredible achievement! ?? pic.twitter.com/uzTXQC8Yj7

But Hamilton does not feel that he is the same category as many other people in society who he feels have contributed much more.

"I think about Sir Captain Tom who got knighted and waited a hundred years for that incredible honour.

"The people that are running hospitals. The nurses and doctors who are saving lives during the hardest time ever, I think about those unsung heroes and I don't look at myself as an unsung hero.

"I've not saved anybody. It is an incredible honour that a small group of people have had bestowed upon them.

"All I can say is that standing [on the podium], and hearing the national anthem I'm very, very proud. I am a very proud Brit and that, as I said before, this really is like the most special moment to be able to represent... to be up there representing a nation."

Hamilton said his main motivation outside of success in F1 at the moment was in helping make change with his anti-racism push and a desire to see the series become more sustainable.

"There's more work to do here in this sport," he said. 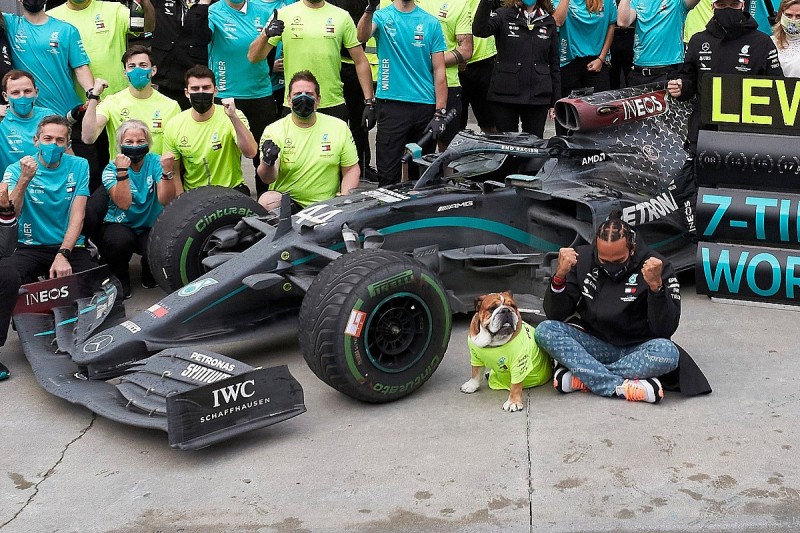 "I think this year we've had this awakening and I think people hopefully are starting to be held accountable and holding themselves accountable and realising that's actually not a really bad thing.

"It just means we've got to work harder. We've got to not be so stubborn, open our minds up and educate ourselves a bit better so we can push for a more equal world.

"I'm not going to stop fighting for that. And then part-time maybe I'll keep racing for a little while!"

Hamilton's rival Lando Norris believes that any knighthood for Hamilton would have a huge influence on encouraging a new generation of British racing stars.

"I think what he's achieved, well, no other British person has achieved," said the McLaren driver.

"Only one person in the world has achieved what he has done, and that's Michael Schumacher.

"He's led the way in many aspects on the track but also off the track. Other athletes who have done such things in other sports have got knighthoods, so I see no reason why he shouldn't.

"At the same time, I think it's a good thing for kids who want to get into racing or don't know much about racing to be inspired by him and also try and achieve similar things to what he has done."