Lando Norris says Formula 1 cars have felt no quicker than F2 or F3 machinery in Turkey this weekend, thanks to the low-grip track surface at the Istanbul Park circuit

A recent resurfacing of the track, after Pirelli had already committed to bringing its hardest range of tyre compounds, has not had time to properly cure ahead of the Turkish Grand Prix and left F1 drivers struggling for grip in both the dry and wet conditions.

With the cars lapping around eight seconds per lap slower than expected in the dry on a surface Lewis Hamilton labelled "terrifying", Saturday's wet action turned into a battle for teams to get their tyres into the right operating window.

The strange nature of the weekend has divided opinion, with some suggesting it has been a farce while others have revelled in the unique challenge created.

McLaren driver Norris, who was given a five-place grid penalty for improving his best qualifying time under double waved yellows, said driving in the slippery conditions was "not as fun" as pushing the car to the limit.

"I think it's been fun because it's different, but it's also not fun because sometimes you just can't do much," said the Briton, who will start 16th after the penalty was applied.

"You're not really driving the best car and you're not trying to drive the car necessarily the best way.

"A lot of it's just down to the car itself, so it almost is worse than normal running in some ways.

"There is a challenge, but I think it was not as fun as normal because we're not pushing the limits of a Formula 1 car.

"You feel like you'll almost be able to do the same lap time in a F2 or F3 car, you're going that slowly." 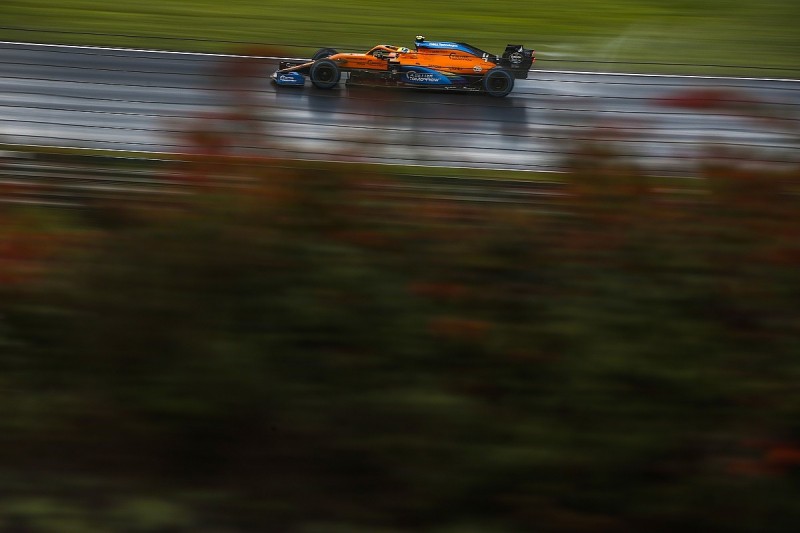 Norris and team-mate Carlos Sainz Jr - who was also given a three-place penalty for impeding Sergio Perez - both endured a frustrating time in qualifying, as their failure to switch their tyres meant they missed the cut for Q3.

Norris reckoned that it would take a post-weekend investigation to get to the bottom of just why McLaren was unable to get more from its tyres like Racing Point could.

"We don't have a clear answer yet, otherwise we would have been probably much quicker than we were," he said.

"We need to sit down and understand, or try to understand, because it's not going to be obvious how we could have got the tyres into a better window or something.

"It's not going to be necessarily just one thing. It can be a combination of things that they still have.

"It is still a Racing Point, it's a very fast car, and it has got a lot of downforce.

"Maybe they can just do that little bit more to turn the tyres on.

"But yeah, I don't have an answer. We have to study it and then I'll be able to answer with more detail."