The Alpine driver stunned Sainz to slot into second with the final timed lap of Q3 – where all the drivers were fuelled to run for the whole session to take advantage of the track drying and the tyres being worked into the optimum working range.

Verstappen was untouchable out front, leading from the off in Q3 and he worked the pole benchmark down to a 1m21.299s.

Sainz had looked like he could run Verstappen close after setting the quickest first sector on his final lap, but while he stayed in contention despite losing a fraction in the middle sector, a big slide exiting the final corner meant he dropped enough time for Alonso to get in ahead of his fellow Spaniard a few moments later.

Lewis Hamilton took fourth for Mercedes, which split its strategy late in Q3 by fitting softs to George Russell’s car – a decision that backfired when the Briton spun at the opening corners on his first lap on the slicks.

Russell dropped from the leading positions to eighth by the end of Q3, with Haas duo Kevin Magnussen and Mick Schumacher leading in pushing the Briton down by taking fifth and sixth. 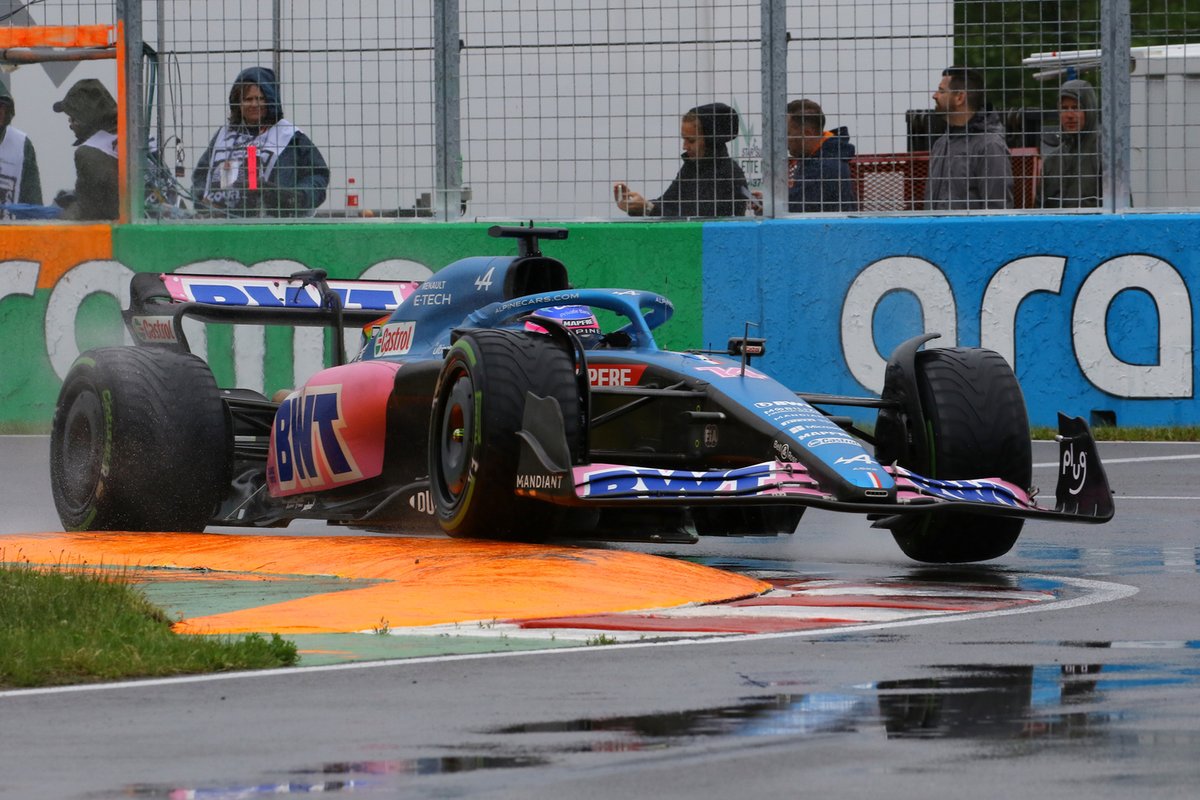 Then came Esteban Ocon, while Daniel Ricciardo and Zhou Guanyu rounded out the top 10.

Zhou is one of several drivers to face a post-session investigation for their driving during a slew of off-track moments throughout qualifying or trying to find space in the traffic during the earlier segments.

Q2 began with the drivers split over staying on the full wets used throughout Q1 or switching to the intermediates, with Alonso using that compound the lead the way early on in that segment, just before Sergio Perez caused a red flag going off into the barriers at the Turns 3/4 chicane.

The Red Bull driver was also on the inters, but locked his right front and after snatching the other front brake he slid across the grass and quickly went head on into the barriers.

Although his car did not appear to be massively damaged, Perez took a long time to engage reverse and when he did he was unable to move backwards as his nose was buried in the barriers so was instructed to switch off his engine, with the barriers then needing to be rearranged once his car had been craned away minus its front wing.

When the session restarted after a 12-minute delay, all the remaining drivers headed back on the inters, with a dry line beginning to appear.

Leclerc did not bother to join them as by getting through to Q2 he secured starting ahead of Yuki Tsunoda at the back of the grid thanks to their engine-change grid penalties, but Lando Norris also did not appear at the start of the remaining nine minutes of Q2. 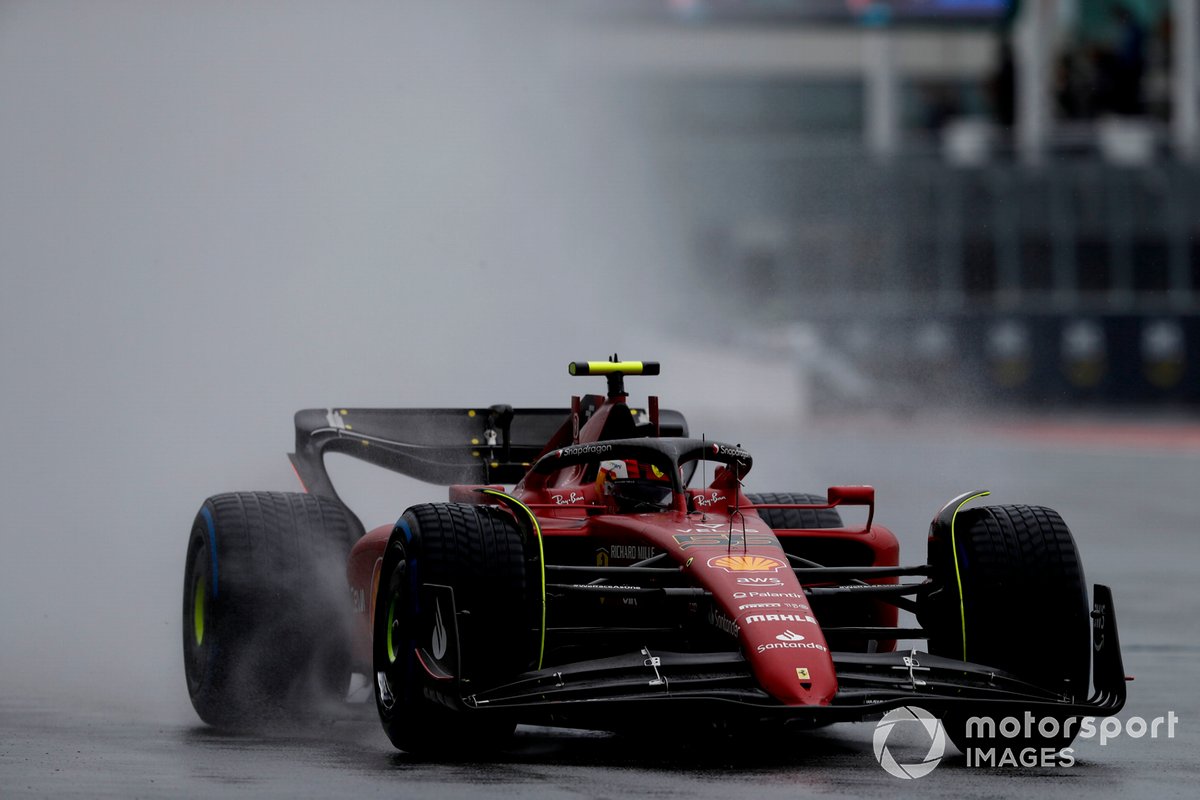 Norris reporting an engine issue pre-red flag confined him to the McLaren garage until there were just two minutes to go as the team tried to find and rectify the issue and although he did get out for one lap, he was soon ordered to pit again after touring several seconds off the pace.

By not setting a time after the red flag, Norris’ banker lap from the start of Q2 left him 14th and behind Perez’s best time from before his off, with Leclerc not taking any part in the middle segment and so being knocked out in 15th ahead of his pre-race grid drop.

With three cars in trouble or not on track, only two drivers were at risk of elimination and when Hamilton leapt up the order with his final lap, the pressure was on Alex Albon, Valtteri Bottas and Esteban Ocon.

The first two named set personal bests with Bottas ahead, but Ocon’s improvement with the last lap in Q2, which Verstappen topped, knocked out the Finn.

As in Q3 and Q2, all the drivers generally ran throughout the opening segment as the times improved by around six seconds as they blew the water away from the racing line, other than big puddles of standing water at the apexes of the first two corners and the exit of the hairpin late in the lap – with Verstappen ending up on top.

Pierre Gasly was eliminated in 16th, with AlphaTauri reporting that he was suffering from a brake problem on this left front wheel, which possibly contributed to his off late in Q1 across the Turns 9/10 chicane.

Gasly only briefly went off track but by not staying to the left of the bollard in the runoff ahead of the short straight down to the hairpin, he did not follow the race directors’ instructions and so will face a post-session investigation.

Sebastian Vettel was frustrated to be eliminated in 17th after being third in the similarly wet FP3 session earlier on Saturday afternoon, with Lance Stroll’s 18th place compounding a miserable qualifying for Aston Martin.

The other home hero, Williams driver Nicholas Latifi, was knocked out in 19th, finishing ahead of Tsunoda, who pitted several minutes ahead of the end of Q1 knowing he would start on the back row in any case.