Sainz set the pace courtesy of his 1m28.942s effort in the first representative dry running of the weekend to sit pretty by a little over a tenth ahead of Hamilton and Norris.

After the changeable conditions of the first practice session left only 10 drivers to set a time, the track was a hive of early activity as soon as the hour-long FP2 got underway on Friday.

Sainz was the first driver to head out on track, the Ferrari shod in medium-compound C2 Pirellis, and was soon followed by Sebastian Vettel and Norris on the harder C1 rubber.

With all 20 drivers venturing onto the circuit within the first 90s, the benchmark lap times kept coming as Sainz, then Valtteri Bottas and Yuki Tsunoda took it in turns to set the pace.

The downside of the congestion, as Verstappen slowed out of Stowe to complete a systems check, was a fight for track position - George Russell was notably delayed by Tsunoda through Luffield.

The Alpine and Williams duos emerged straight away on the C3 soft tyres, which allowed Esteban Ocon to temporarily occupy first place courtesy of a 1m33.081s lap after four minutes.

He was then surpassed by team-mate Fernando Alonso, the two-time champion running 0.015s quicker until Vettel moved top by 1.6s aboard the updated Aston Martin AMR22.

It was after five minutes that the usual suspects of Ferrari and Red Bull rose to the fore. 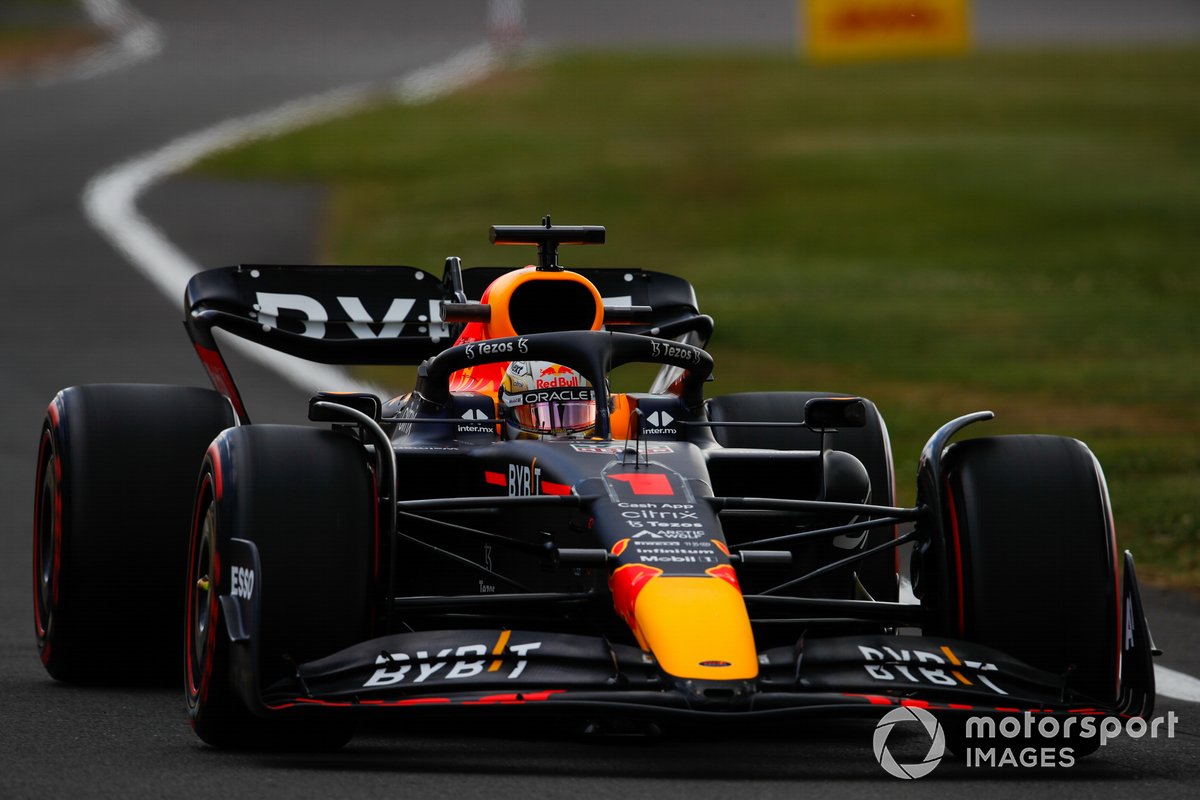 Leclerc lowered the benchmark to 1m30.784s to pip Sainz by 0.014s and in turn found six tenths over Verstappen.

Sainz backed off for a cool lap and then pushed again to set a new yardstick on the medium tyres, his 1m29.962s moving him eight tenths clear of Scuderia team-mate Leclerc.

Hamilton moved to third on the same yellow-walled compound despite lingering complaints over the Mercedes W13 bouncing excessively at high speed.

Verstappen then did enough to split the Ferraris after 11 minutes before Leclerc improved once more to sit top with a 1m29.639s and head Sainz, Verstappen and Sergio Perez.

Verstappen improved again to divide the red cars, his 1m29.885s moving him within three tenths of Leclerc.

In a frenetic opening third of FP2, Leclerc then lowered the times to 1m29.462s on mediums to end the yellow-walled running as the pacesetter with a tenth in hand over Sainz.

A lull while all 20 cars hit the pits then gave way to the fastest soft-tyre running, with Norris soon climbing to the top of the leaderboard as he emerged on the red rubber.

The McLaren racer’s 1m29.118s moved him 0.3s ahead of Leclerc before Sainz had two hits at setting the ultimate pace.

He first buzzed the line at 1m29.014s to depose Norris as his Ferrari F1-75 sported a vibrant flo-vis rear-wing paintjob - the Ferrari crew having shaved off carbon fibre during the brief respite. 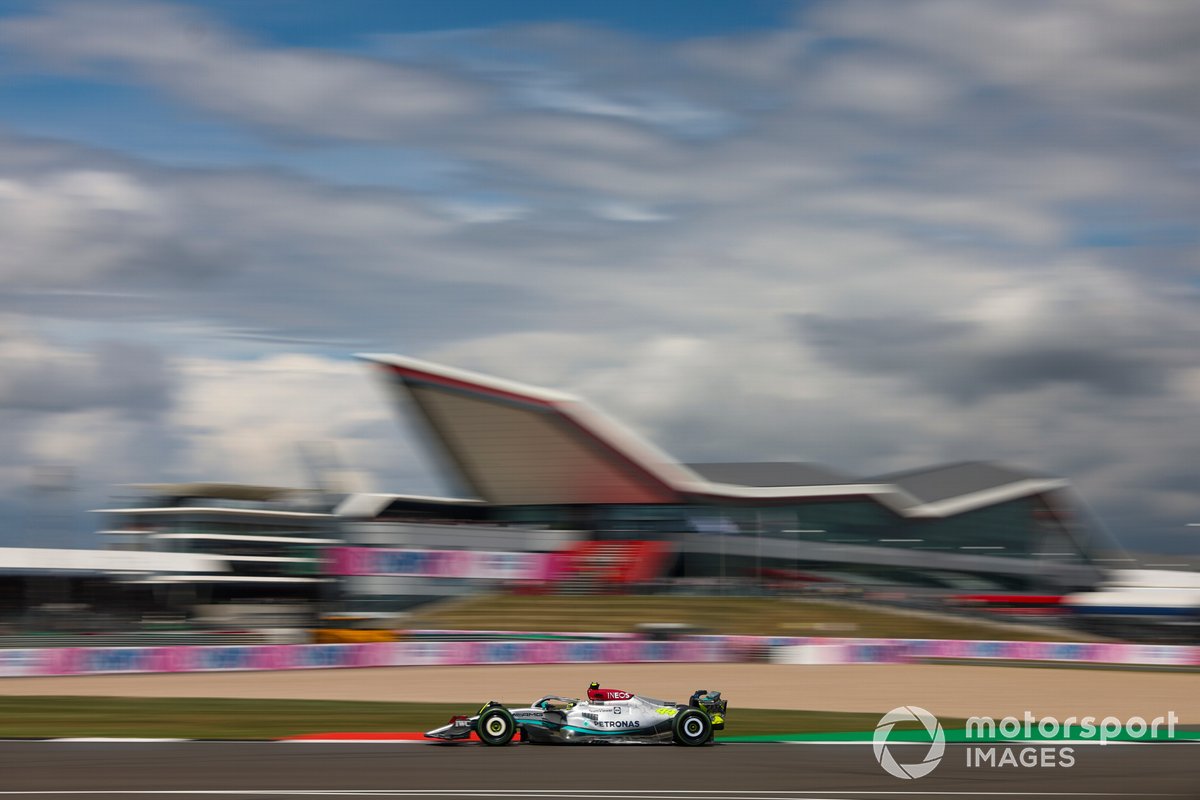 Sainz, like Alonso and Daniel Ricciardo, had to be wary of floor damage after running over the exit kerbs at Copse, but he then improved once more to definitively set the pace.

Sainz remained king in FP2 as he next flashed the timing line with his ultimate 1m28.942s while Hamilton would climb to second - 0.16s in arrears - before losing a chunk of wing in the dying moments having also troubled the Copse kerbs.

Norris didn't escape trouble free either. His McLaren was dropped off its rear jack in the pits and then in the confusion, the mechanic on the left-rear corner tried to fit a tyre the wrong way around.

Still, Norris was only 0.013s behind his compatriot while Verstappen - whose groove was interrupted by a red-light warning and excessive noise in the cockpit as he suspected parts were rubbing - ranked fourth.

Leclerc was 0.25s adrift of Verstappen, while Alonso took the revised Alpine machine to sixth ahead of Perez and Russell.

Ricciardo ended up ninth, having been the fastest runner on the hardest-available C3 compound.

Lance Stroll ran to 10th, the Aston Martin driver having caused the late red flag in a damp FP1 when he hit the gravel at Copse.

Bottas, who had set the pace in first practice with a 1m42.249s, ran to 11th over Ocon and Alex Albon - the Thai-Brit the sole Williams driver to receive car upgrades for Silverstone and he spent a chunk of the session with his right sidepod coated in pink flo-vis.

Zhou Guanyu was 14th ahead of Vettel, who will drive his Williams FW14B chassis 08 ahead of the GP, and Tsunoda.

Kevin Magnussen headed Pierre Gasly, who complained of a persistent lack of grip, as Mick Schumacher and Nicholas Latifi completed the order.