Valtteri Bottas topped a damp first practice for the British Grand Prix ahead of Lewis Hamilton, with poor weather disrupting the opening session of the weekend.

The Alfa Romeo driver was battling the Ferraris of Carlos Sainz and Charles Leclerc for much of the hour-long practice, taking third place with his first attempt, a 1m46.056s.

Leclerc led early on, with Sainz then taking the top spot, before Bottas demoted the pair, setting a 1m42.249s with just five minutes left on the clock.

The session was ended prematurely after Aston Martin’s Lance Stroll ran wide on the wet patches at Copse, losing the rear end and ending up beached in the gravel trap.

Lewis Hamilton made a late dash to second, 0.5s behind his former team-mate, while Sainz and Leclerc took third and fourth respectively.

Heavy, dark rain clouds descended on the Northamptonshire circuit ahead of the session, with steady showers prompting a slow start to running.

The Mercedes pair of Hamilton and George Russell were first to emerge from the pits to cheers from their home crowd, while the Ferrari duo of Sainz and Charles Leclerc followed soon after.

Both Britons and Sainz opted for an installation lap and pitted, while Leclerc went on to put the first time of the weekend on the board with a 1m44.769s on the intermediate tyres.

Varying conditions on the 5.891km circuit complicated matters for the teams, with the track far wetter around Copse, while heading from Stowe towards the Hamilton Straight remained largely dry.

Leclerc improved to a 1m43.801s on his second attempt, which remained the only one on the timesheet for 10 minutes, before Yuki Tsunoda put in a 1m51.373s in his AlphaTauri.

Sebastian Vettel was next out on track, before team-mate Stroll slotted into second place, albeit 10s behind Leclerc.

Sainz was next to put in a representative lap, with a 1m49s exactly putting him behind his team-mate, before improving to take the top spot on his second lap with a 1m42.967s. 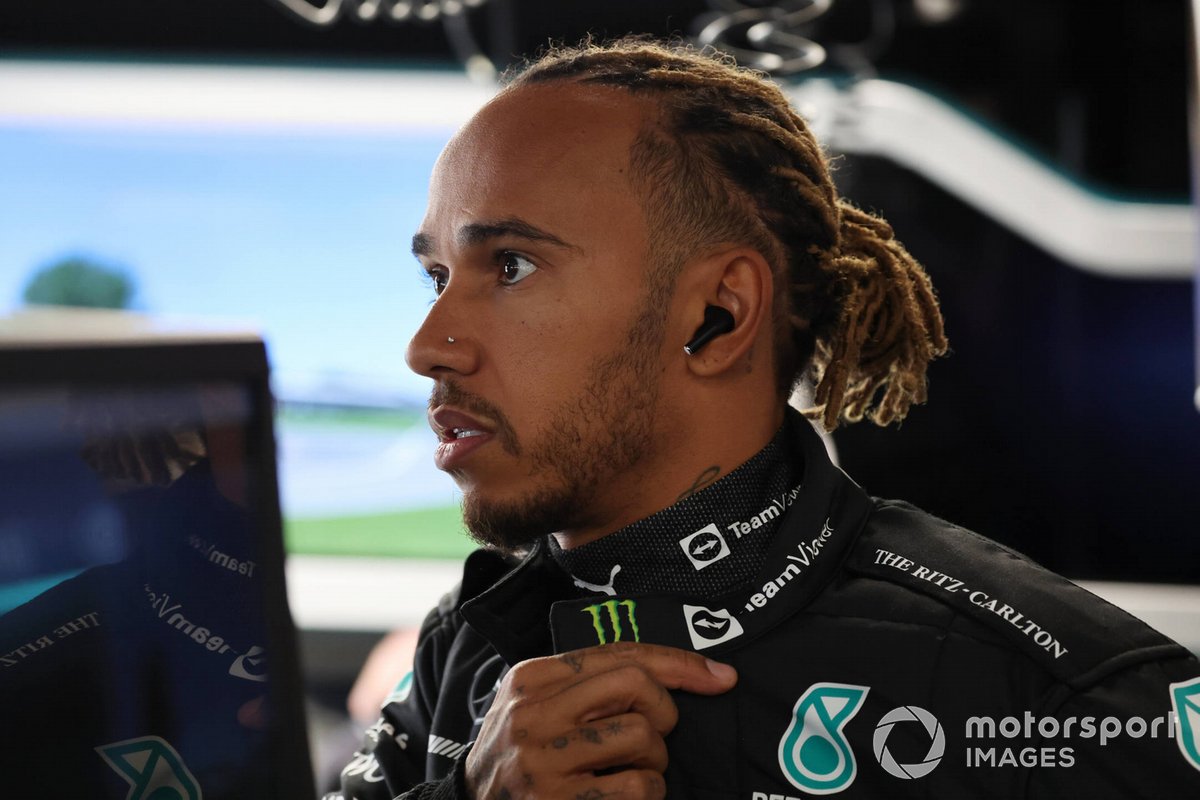 In a brief flurry of fast laps, Kevin Magnussen took second place from Leclerc to split the Ferraris before Sainz’s second attempt, while the Alfa Romeos traded third place, with Guanyu Zhou setting a 1m46.171s before Bottas went just over 0.1s quicker.

The former Mercedes driver then set a 1m43.437s to split the Ferraris, running just under 0.4s ahead of Leclerc in third.

Less than half of the grid had times on the board at the halfway point, with the rain then resuming to further complicate proceedings.

Red Bull’s Max Verstappen, who had put in just one installation lap with 20 minutes left on the clock, was seen chatting to his father Jos in the garage, while Hamilton emerged to wave to adoring fans.

The seven-time world champion took to the track tentatively with 10 minutes remaining, battling a damp sector two and a strong headwind into Turn 15 to take seventh place with a 1m49.476s, over 6.5s off Sainz in the lead, before shaving off almost five seconds on his next attempt having switched to slick tyres.

Bottas improved to second to split the Ferraris before taking top spot, before much of the field emerged with five minutes remaining as conditions improved.

Hamilton’s late dash to second demoted Sainz and Leclerc, but was not enough to take the top spot at a race he has won eight times.

Mick Schumacher finished in fifth for Haas, with Zhou splitting the German and his team-mate, Magnussen, in seventh.

Stroll took eighth despite his late crash, with Tsunoda and Vettel rounding out the top 10 and leaving the rest of the grid without times on the board.