George Russell sensationally ended the Mercedes winless run as he overthrew Max Verstappen to win the final sprint race of the 2022 Formula 1 season in Brazil.

The Briton battled fiercely with the two-time champion, the pair dicing wheel-to-wheel for three laps before eventually the W13 driver seized first place and ran away to victory.

Verstappen and 16th place-starting Nicholas Latifi were the only drivers to start on the medium tyres as everyone else favoured the quicker but less durable, red-walled soft compound.

With more grip from the off, Magnussen launched strongly to hold the lead into the downhill Turn 1 and pulled half a second on his front-row rival Verstappen, who had to heat his tyres.

With Russell’s rubber immediately up to temperature, he was able to stick the nose of his Mercedes alongside the Red Bull to challenge for second place before the RB18’s superior straightline speed made itself known and he eked away from the W13.

The punch of the Honda engine then allowed Verstappen to tuck into the tow of Magnussen, with him eventually relegating the compliant Haas driver under braking into Turn 1.

Russell followed suit with DRS to pass around the outside of the Dane over the start line. Before long, Sainz lunged up the inside of Magnussen to knock him off the podium. 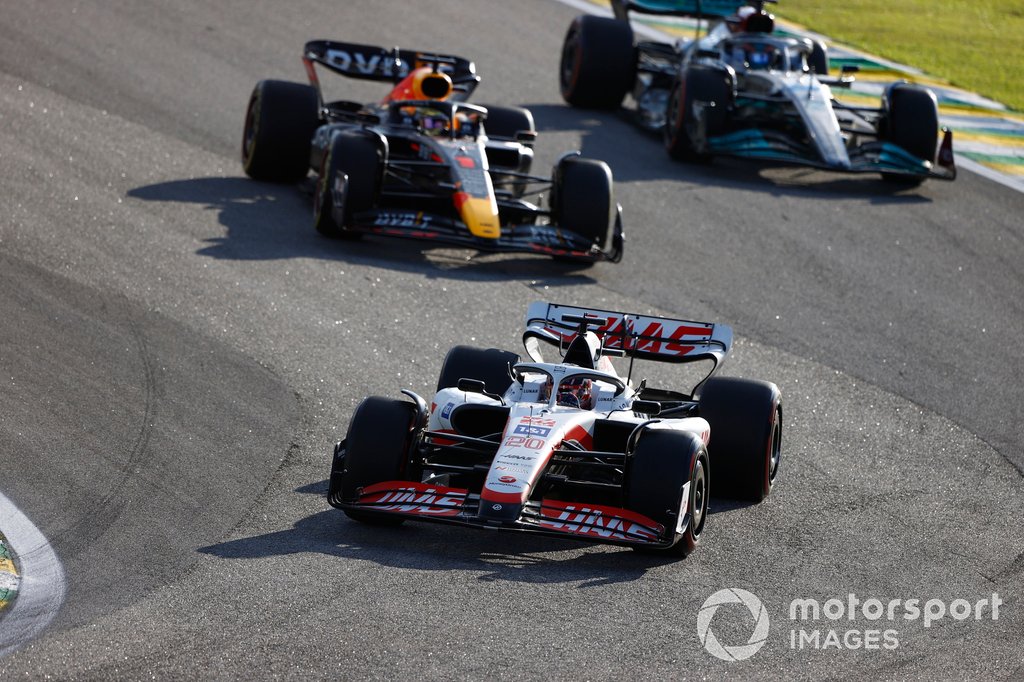 Verstappen looked strong as he pulled 1.1s clear of the chasing Silver Arrow, but Russell kept his quicker soft tyres alive to reel in the leader and gain DRS from lap 10.

With the overtaking aid again activated, he tried to pass around the outside into Turn 4 but Verstappen held his nerve under braking to sure up the position through the middle sector.

There was almost a carbon copy of that dice next time around on lap 14, with Verstappen then getting better drive off the exit to keep hold of the lead for another lap of Interlagos.

But then, on the 15th tour, Russell nailed his exit onto the back straight to gain the tow and DRS once more to pulled clear of Verstappen into the braking zone and definitively nick first.

The W13 then came on song in clear air, with Russell marching 1.6s clear as Verstappen then was under threat from Sainz, with the Spaniard robustly passing at the start of lap 19.

The British GP victor threw his F1-75 up the inside of Turn 1 with the pair bashing wheels and as Sainz came back across the racing line, he clipped the front wing of the Red Bull.

That damaged endplate and a compromised line for Verstappen then meant, after running over debris, he was under threat from Hamilton. But the Dutch racer squeezed his bitter 2021 championship rival through Turn 6 to hold on to third place for the time being. 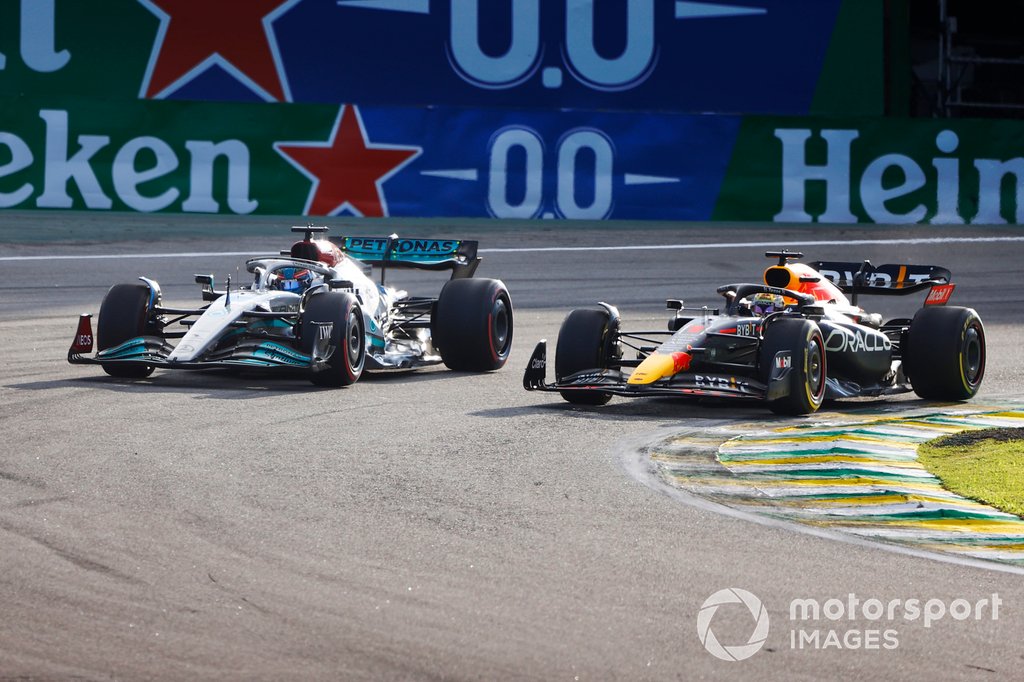 But as lap 18 came to a close, Hamilton gained DRS to sail past over the line and cement third before chasing after Sainz - now complaining that he was losing the soft tyres.

He managed to hold on by less than half a second from Hamilton, but it was Russell who bagged the spoils nigh on four seconds clear to score Mercedes its first win of the year.

Verstappen continued to fourth but was 6s down on Hamilton, as Sergio Perez recovered from ninth to fifth ahead of Charles Leclerc and Lando Norris, while Magnussen’s anticipated fade ended with eighth place.

Sebastian Vettel bagged ninth after surviving a trip over the grass while attempting to pass his uber-defensive team-mate Lance Stoll, and Pierre Gasly completed the top 10.

Stroll dropped to 17th with a 10s penalty for his move on Vettel - two places down on Fernando Alonso, who was forced to pit for a new front wing after colliding with fellow Alpine driver Esteban Ocon.

Ocon dropped to 18th ahead of only Latifi and Alex Albon, who retired on lap 13.