The hour of FP2 running that during a sprint weekend falls between the Friday qualifying session and half-distance Saturday race has drawn widespread criticism about it uselessness.

With no need to chase one-lap pace, race runs dominated the order as Ocon came out on top despite running only with a scrubbed set of the red-walled soft tyres over Red Bull’s Perez.

The Ferraris led the way initially as soft-shod Leclerc lapped in 1m15.868s to hold a couple of tenths over medium-tyred team-mate Sainz before Russell moved to the top for some time.

He ran on the softest C4 compound to a 1m15.115s and then improved by another 0.2s to sit 0.57s clear of hard-tyre benchmark Sergio Perez, Pierre Gasly, Lewis Hamilton and Friday qualifying star Kevin Magnussen, who set the pace on the C3 yellow-walled medium tyres.

After the 2023 Pirelli tyre tests that took over FP2 in the United States and Mexico, the pre-sprint practice was similarly tedious as race simulations dominated the opening half an hour.

The Ferraris, for instance, were only sixth and seventh as Max Verstappen was 12th on hards.

Notably, Nicholas Latifi locked up his inside wheel heavily into the penultimate corner that leads up the hill to the timing line, meaning he ploughed over the grass before rejoining. 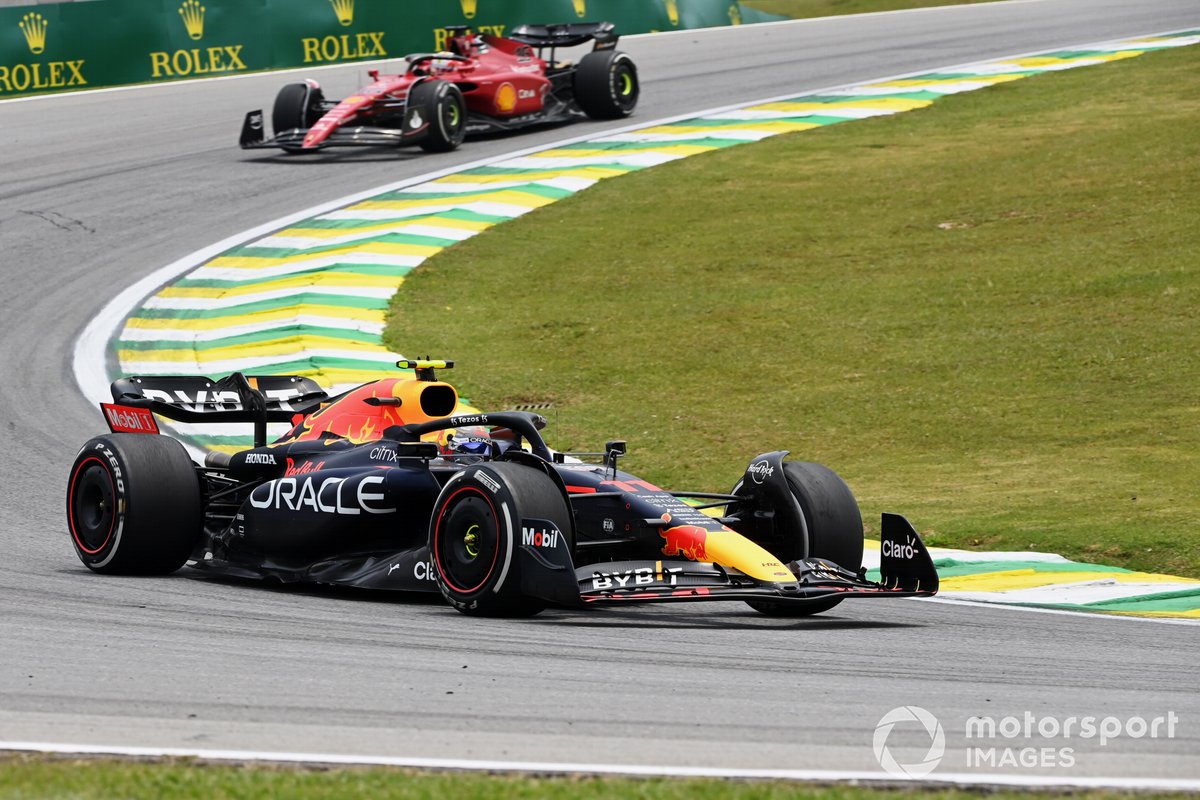 Fitted with a scrubbed set of softs, Ocon was finally able to demote Russell as the Alpine driver posted the fastest first sector of the session at that point to drop his time to 1m14.604s.

Hamilton improved to third on his next run on used softs, lapping 0.22s off his team-mate.

The Red Bulls then put themselves in the mix with 20 minutes to go as, on their first runs on used softs, Perez ran to second (0.184s down) and Verstappen fourth to split the Mercedes.

With no late flurry of qualifying simulations as per a conventional F1 weekend, Ocon remained on top over Perez and Russell, while team-mate Fernando Alonso ran to fourth.

Verstappen completed the top five ahead of Hamilton, Gasly and under-threat Haas driver Mick Schumacher who extracted 0.15s over his ninth-quickest stablemate Magnussen.

Lando Norris completed the top 10 over Sainz as Leclerc ran to 13th behind Yuki Tsunoda. Daniel Ricciardo, who complained of snaps over oversteer across compounds, was 14th.

In the only change to the regular driver line-ups, Logan Sargeant replaced Alex Albon in the Williams as he seeks to earn the superlicence points to lock in his F1 promotion for 2023.

The American FIA F2 racer propped up the times and exited the car with 10 minutes to run.