The Dane, who was recalled to the team for this season after the ousting of Russian driver Nikita Mazepin, remarkably landed top spot when a red flag in a murky Q3 allowed conditions to deteriorate.

That meant no one could improve in the final eight minutes of qualifying to leave the American outfit to watch the clock until it was assured of its maiden pole and the celebrations erupted.

The drama of Q3 began when Ferrari took a major gamble by sending Leclerc out on a set of intermediate tyres to pre-empt the return of rain - qualifying having started damp before drying up.

The nine other contenders, meanwhile, emerged on slick Pirelli tyres.

The Scuderia appeared to be hoping that the showers would arrive in time to catch out the dry runners while its driver would be on the right compound at the optimum time before the conditions got worse.

However, Leclerc soon realised he was the odd on out and was venting his anger, even waving to the pit wall as he passed to begin his flying lap.

He ran slowest of all through the first sector, was struggling for grip and holding up the pursuing Sergio Perez before aborting the run and diving into the pitlane for a shot on slicks.

With the intermediates now clearly the wrong option, slick-runner Magnussen was able to bolt to a 1m11.674s lap to take top spot away from Red Bull’s Verstappen by some two tenths, the Dutch driver having locked up at Turn 8 to ultimate cost him pole.

Then George Russell - who had just ran to third place - dropped his Mercedes W13 into the gravel on the exit of Turn 4 to bring out the red flags.

The Brit appeared to lock the front-right into the left-hander and the rear clipped the slippery white line to pitch him off. As he tried to spin to recover, he ditched the rear axle into the gravel.

While Russell initially kept the rear wheels spinning and signalled to the marshals to perform a live recovery of his car, he eventually retired from the session.

But with the threat of rain having already loomed large, the delay was long enough to allow the wet weather to return and no one could find time despite 8m10s remaining. 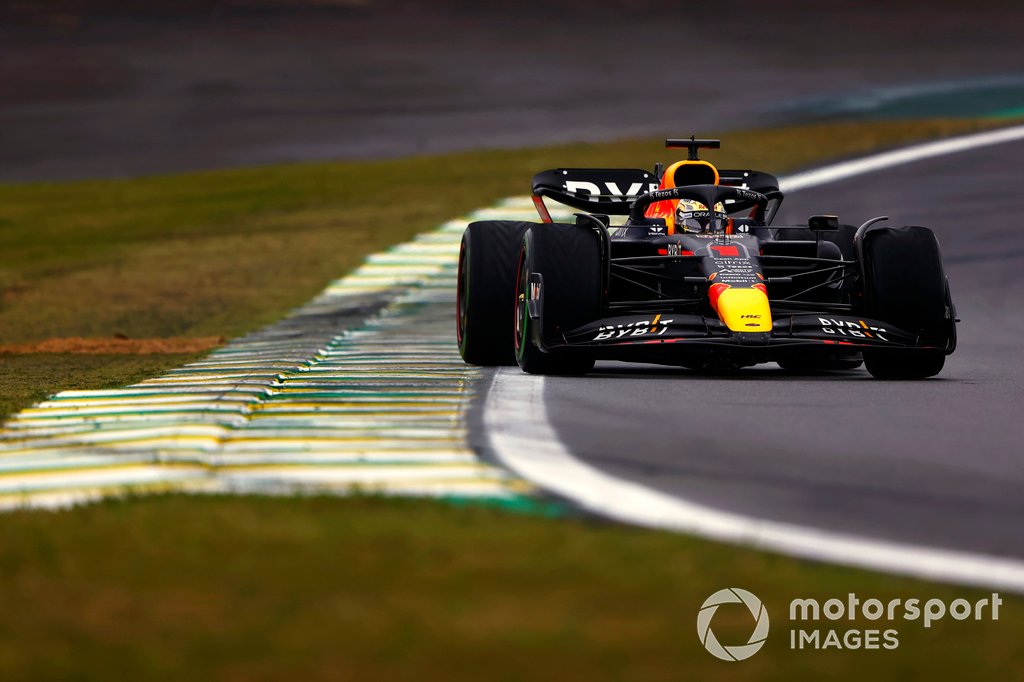 In the knowledge that they would not improve, the drivers started to exit their cars to cue the Haas celebrations.

Russell would therefore keep third place despite his shunt, while Lando Norris clocked fourth for McLaren ahead of Carlos Sainz – although the Ferrari driver is poised to start in 10th owing to a five-place grid penalty for a change of internal combustion engine.

Esteban Ocon ran to sixth ahead of Alpine team-mate Fernando Alonso, while Perez - having been delayed by Leclerc - clocked only ninth place.

Ocon had scrapped into the top 10 by a slender 0.045s at the expense of Alex Albon, while Pierre Gasly ran to 12th ahead of Sebastian Vettel, Daniel Ricciardo and Lance Stroll.

The dying second of Q2 were something of a damp squib as the at-risk Mercedes improved.

They appeared to be under threat when some drivers reported that more rain was arriving late on, the Silver Arrows having by then only lapped on used softs to run outside the top 10.

But as the Aston Martins notably struggled to find time, Russell eventually climbed to third with five minutes to run. Hamilton slotted directly behind in fourth but was shuffled to ninth.

Sainz also comfortably climbed to second in Q2 in the end, the British GP winner having sat 10th and only 0.008s clear of the drop zone but he moved clear by running to a 1m10.890s to best Leclerc by 0.06s and run just 0.009s shy of pacesetter Verstappen.

Ferrari had already been forced to survive a considerable Q1 scare when the initially damp conditions improved sufficiently to allow for a switch to the softs after slick-tyre guinea pig Gasly began setting the fastest sectors.

Gasly was struggling for grip initially, sliding well wide through the final corner, but next time around the Alpine-bound racer ran fastest by 0.6s and then improved by another second.

To respond, the Scuderia crew jacked up Leclerc’s car but only had a scrubbed set on hand, so a delay ensued while new boots were finally retrieved as Sainz was held in a double stack.

Then Leclerc was forced to abort his first flying lap on the red-walled rubber when he was held up by Yuki Tsunoda through the final sector, in turn delaying his chasing team-mate.

While Sainz still managed to improve, Leclerc had it all to do on his final run but did enough to make it to 12th and survive the late flurry, as Nicholas Latifi just missed the cut-off for Q2.

The departing Williams driver had topped the session only moments earlier after he bolted on the dry tyres but was rapidly shuffled down to miss the threshold by 0.16s to Ricciardo.

In a session to forget for the Alfa Romeo team-mates, Zhou Guanyu ranked only 17th ahead of Valtteri Bottas as AlphaTauri’s Tsunoda and Mick Schumacher lapped slowest of all.