The defending champion stretched his standings lead from nine to 34 points over Leclerc - who had started from his sixth pole position of the season - as he bagged his fourth victory in five races over team-mate Sergio Perez by 20.8s.

Verstappen's 25th F1 triumph arrived after passing early leader Perez for the provisional lead, with Leclerc out-of-sync due to pitting in response to a VSC before his engine blew shockingly.

With Sainz also eliminated as part of an extreme attrition rate for Ferrari-powered cars, the way was paved for Verstappen to win as George Russell completed the podium.

Most of the grid assembled with brand-new medium compound C4 tyres, bar Sebastian Vettel and Kevin Magnussen (used tyres) plus Daniel Ricciardo, Valtteri Bottas and the back row of Lance Stroll and Mick Schumacher who were all shod on the C3 hard rubber.

Perez was encouraged over radio to get his “elbows out into Turn 1” and duly delivered.

Leclerc’s initially getaway was sound enough but wheelspin in the second phase allowed Perez to draw alongside at Verstappen was boxed in after the best launch of the lot.

The Ferrari driver then considerably locked-up his front-left into the opening 90-degree left-hander to run well wide of the apex and ensure Perez took the lead of the race. 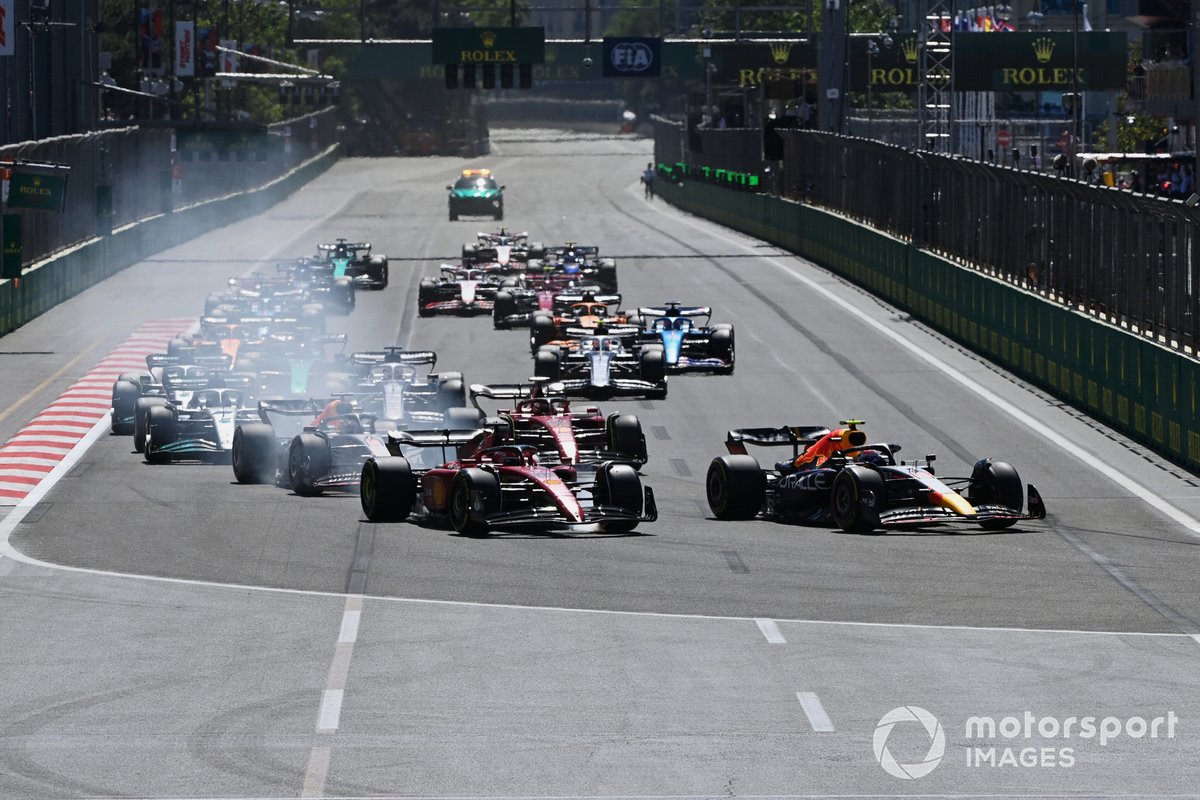 Verstappen was able to have a look up the inside of Leclerc but thought better of it as Sainz tried to get in on the act before dropping adrift of the leading three cars.

Perez completed the first lap with 1.3s in hand over Leclerc to immediately escape the DRS zone and extended that by half a second over the next two tours to cement first place.

With Leclerc sliding around, Verstappen was able to stick within 0.7s of his title rival.

Leclerc endured a wiggle out of Turn 16, the last defined corner, to allow Verstappen to close even further with DRS before a yellow flag then virtual safety car interrupted play.

The Ferrari attack was down to one car when Carlos Sainz ran down the Turn 4 escape road with a possible power unit failure while 5s behind Verstappen and 5s ahead of Russell.

Ferrari rolled the dice to gain a theoretically cheaper pitstop by calling Leclerc in for a set of hard tyres on lap 10 but despite no obvious error, the Scuderia took 5.4s to service Leclerc.

Red Bull did not cover the strategy, giving Perez a lead of 2s over Verstappen as Leclerc resumed 11s behind the pair - but from lap 13 began setting the fastest laps of the race. 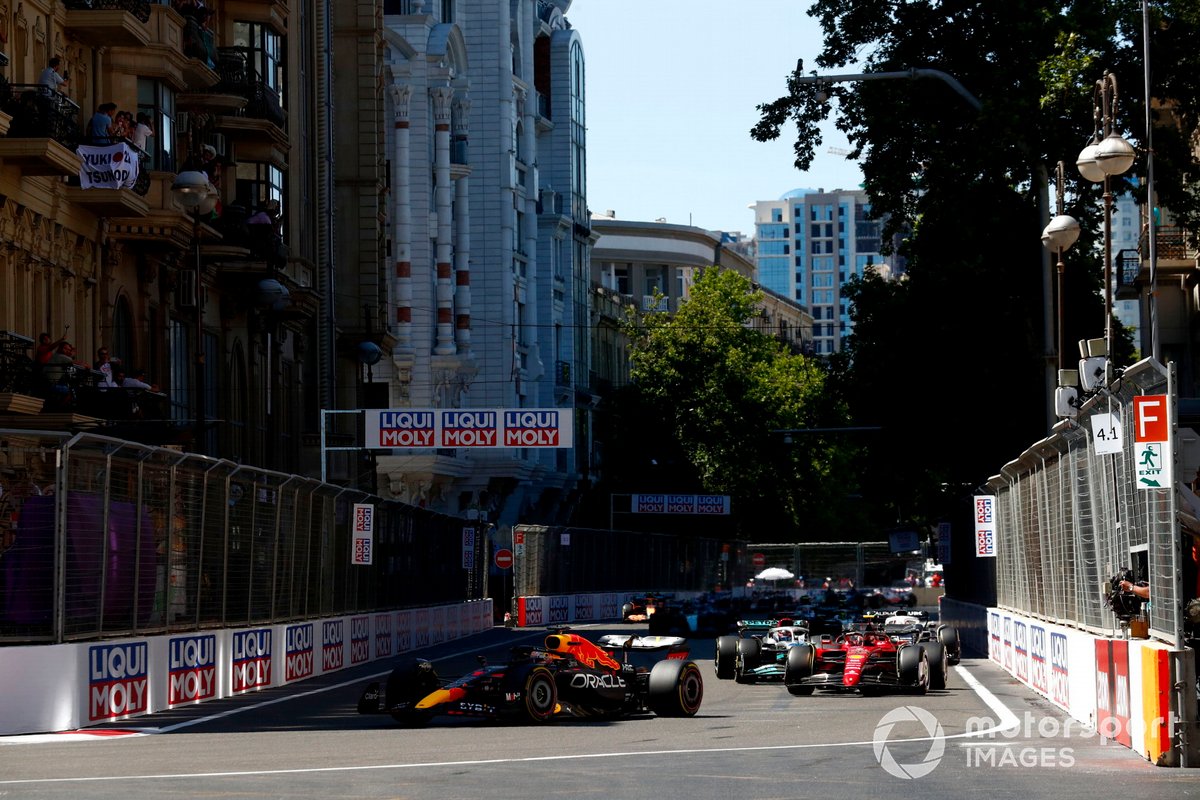 Verstappen was able to eat into Perez’s advantage before the Mexican, who dropped 2s on one lap, was told “no fighting” to allow his DRS-assisted team-mate to take the lead on lap 15 into Turn 1.

At the end of the following tour, Perez pitted for softs but like front-row rival Leclerc, was hampered by a massively slow 5.7s stop led by a problem with the front-right wheel.

Red Bull called Verstappen in for his jump to hards only two laps later, and he too endured a subpar 3.5s service to rejoin in the lead with a 13s deficit to Leclerc – managing overheating rear tyres - as Perez nicked fastest lap from the Ferrari while running 4s behind Verstappen.

But too hot tyres were the least of Leclerc’s troubles soon after as at the end of lap 20, his engine blew up through the final and he coasted into the pitlane to end Ferrari’s disaster.

After the MGU-H turbo failure in Spain, it marked the second engine-based retirement for Leclerc in three races to add to the lost Ferrari 1-2 - from strategy blunders - in Monaco.

That left Verstappen in the lead by 5.2s over Perez as fifth-starting Russell moved into podium contention ahead of Ricciardo, Pierre Gasly and Lewis Hamilton.

Verstappen would negotiate target lap times with his engineer as they tried to find a balance between preserving the car but not allowing the tyres to cool too much. 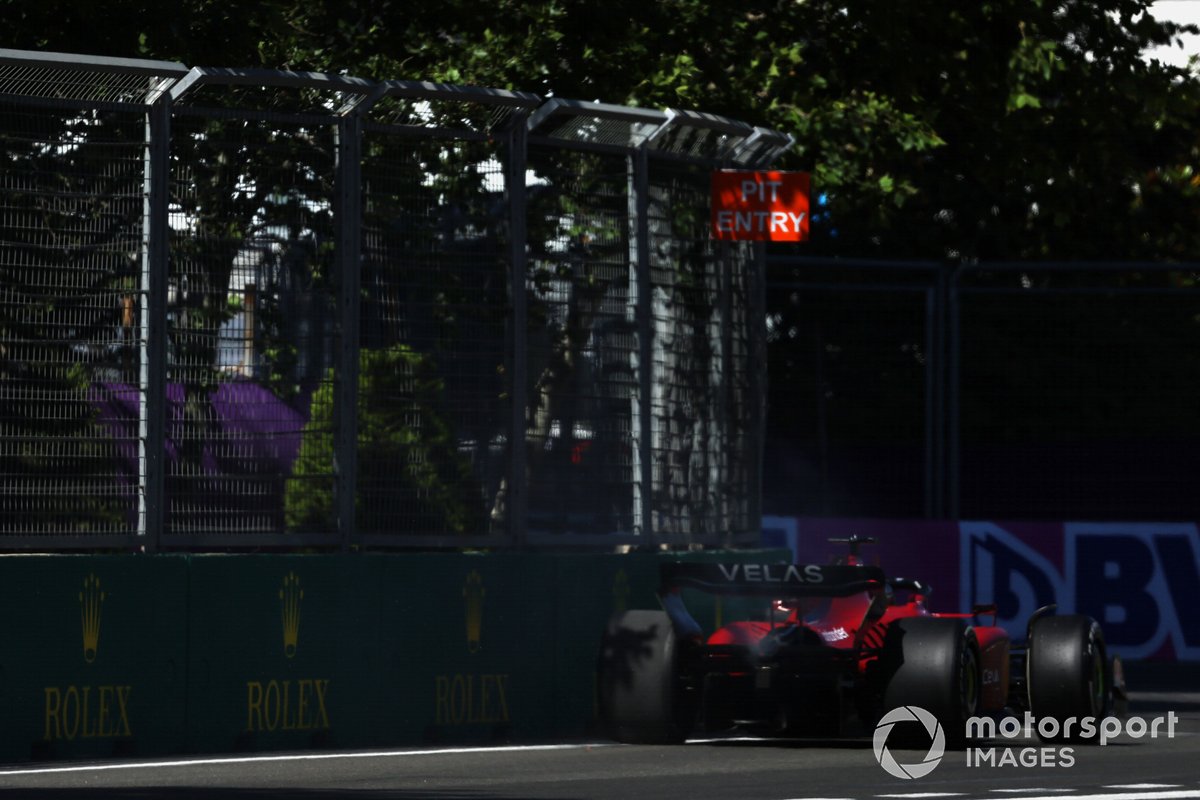 Then the virtual safety car made its second appearance to account for 16th-starting Kevin Magnussen, who had been climbed up to 11th to battle with Ocon for points.

But then the Ferrari engine in the back of the Haas also blew, to go along with Ferrari customer Alfa Romeo having to stop Zhou Guanyu eight laps previously.

Magnussen parked up on the approach to Turn 15 and waved to the marshals to help recover the Haas VF-22, which started to roll down the hill to the apex.

Red Bull reacted by pitting Verstappen for a second time to take on a set of hard tyres to the flag, finally nailing a 2.7s stop, before Perez made his stop for hards on the same lap 34.

But a rear-left delay meant more time was lost in the pitlane thanks to a 4.4s stop, to give Verstappen a lead of 10s when the four-minute VSC interluded was over.

Although it was Perez that would walk away with the fastest lap of the evening, Verstappen’s second half race pace stretched gap to north of 20s at the flag.

Russell strapped in for a lonely race but profited from the Ferrari nightmare to seal a podium despite a troubled weekend for the porpoising and draggy Mercedes W13. 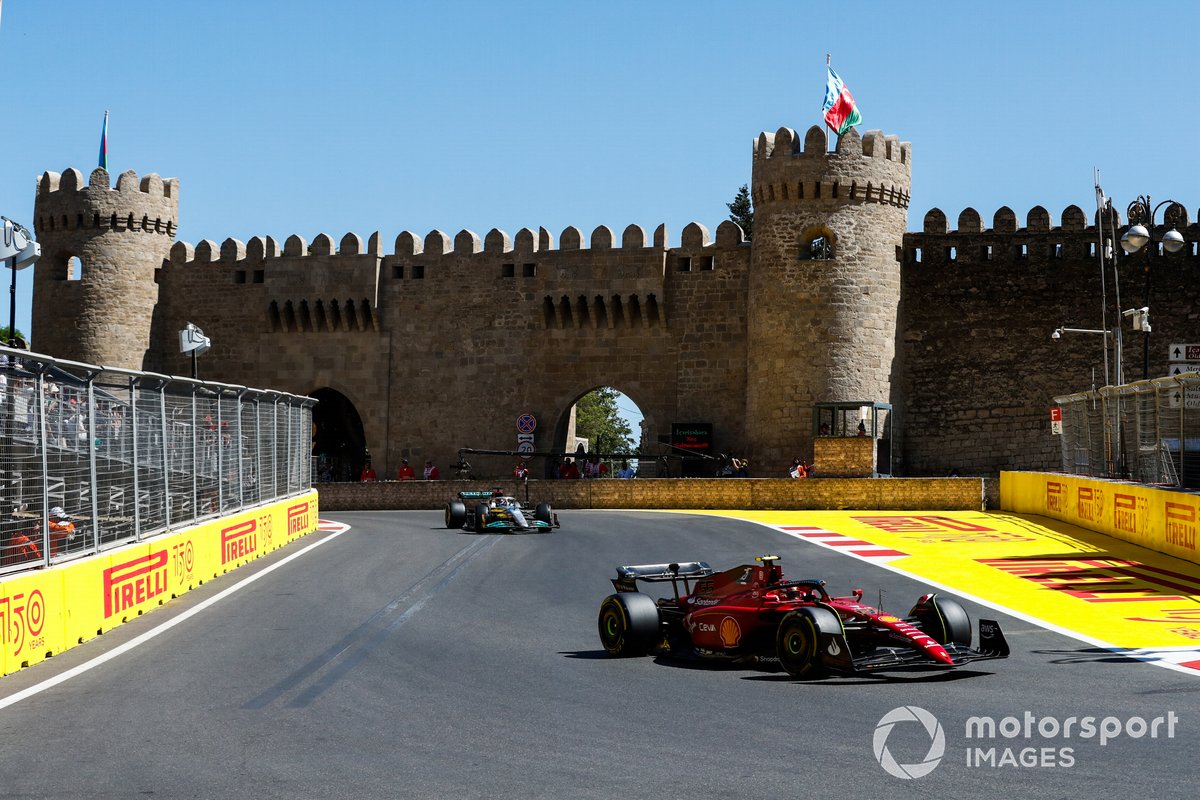 Despite back pain, Lewis Hamilton climbed to fourth thanks to a spirited drive with notable overtakes on the one-stopping trio of Ricciardo, Yuki Tsunoda and Pierre Gasly.

Gasly did manage his hard tyres for the long-haul, sealing fifth as a racy Sebastian Vettel recovered strongly from an early error to climb to sixth place.

Despite starting on a used set of mediums, Vettel had been fighting with Hamilton for seventh before pitting for hards to then chase after Ocon.

The Aston Martin passed the Alpine for ninth place on lap 13 before locking up at Turn 3 to abort the corner and spin in the escape road, narrowly missing Tsunoda when resuming in 12th.

Fernando Alonso was another strong climber, sealing seventh for Alpine as Ricciardo just managed to keep 8th over Lando Norris by just three tenths, the McLaren pair having each had to make their case for track position in the opening and final phase of the race as they ran on split strategies.

Ocon’s long opening stint on the hards returned the final point as Valtteri Bottas in 11th marked the highest finish for a Ferrari-powered car.

Alex Albon climbed to 12th ahead of Tsunoda, who had to pit for some tape to his rear wing after his DRS flap split in half. Schumacher crossed the line in 14th.

Latifi’s afternoon was spoiled before it had really begun for the Williams driver was handed a 10s stop-go penalty when a team mechanic rolled his car back, illegally touching the car.

He was then handed a further 5s penalty for failing to comply with blue flags.

Stroll joined Magnussen, Zhou and the two Ferraris as retirees.