In a bonkers 2017 Azerbaijan Grand Prix, Lance Stroll made Formula 1 history in his charge to the podium which became part of a true modern classic

The 2017 Azerbaijan Grand Prix was the race that really put the Baku City Circuit, in all its glory and craziness, on the map in Formula 1.

Daniel Ricciardo charged from 10th on the grid to score a stunning victory for Red Bull as Lewis Hamilton and Sebastian Vettel collided behind the safety car, igniting their battle for the drivers' title.

But one of the quirkier stories from that turbulent weekend came in the form of Williams rookie Lance Stroll, who scored his maiden F1 podium in only his eighth grand prix start.

At just 18 years old and in only his fourth season racing single-seaters, Stroll's readiness to debut in 2017 was hotly-debated. The Canadian arrived at Williams after winning the previous year's European F3 title as the Prema squad rallied around him, and had also completed a sizeable amount of private running to prepare for the start of his F1 career.

It proved to be a tough start for Stroll, though. He retired from each of his first three races, and was scoreless through his first six, instead getting caught up in number of incidents.

Stroll was dismissive of the criticism that followed, calling it "funny", while deputy team boss Claire Williams called on his naysayers to "give him a break", adding: "We always said from the outset that he needed some time to familiarise himself. I think the criticism that has been levelled at him is grossly unfair." 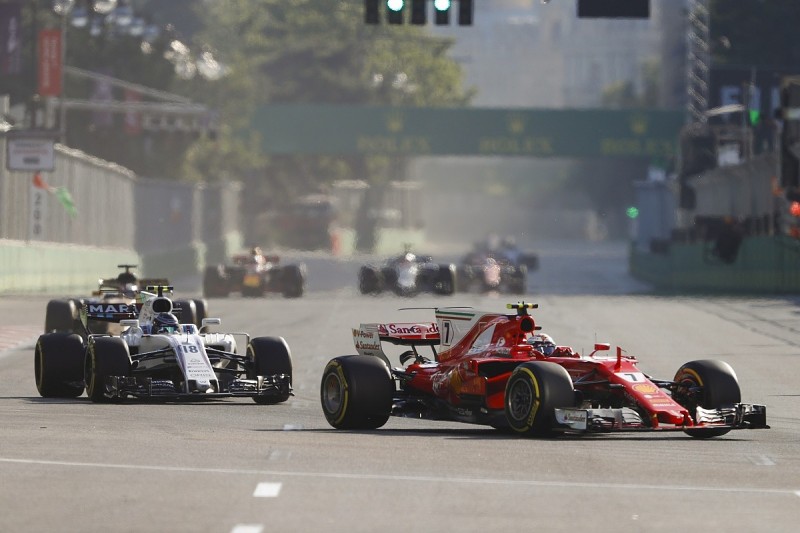 Stroll charged from 17th on the grid to finish ninth at his home race in Montreal, getting off the mark in F1. He followed that up by qualifying eighth two weeks later in Baku, reaching Q3 for the first time and edging clear of team-mate Felipe Massa. Massa led their intra-team points battle 20-2 heading into the race.

Stroll came under considerable pressure from eventual race winner Ricciardo on the opening lap, but kept him at bay through the sequence of 90-degree corners in the first sector. Massa had been able to pass, but Stroll retained P8 after Valtteri Bottas dropped back following a clash at Turn 2 with Kimi Raikkonen.

Unable to overtake Stroll, Ricciardo was brought into the pits at the end of lap five as Red Bull tried to put him in clear air and avoid getting stuck in the middle of the pack. Stroll had been keeping Force India's Esteban Ocon in sight through the early stages, sitting around 1.5 seconds behind, before the safety car was called following a stoppage for Daniil Kvyat. Max Verstappen had also been forced to retire due to an engine issue, promoting Stroll to seventh for the restart.

This was a time when the Mercedes power unit was the class of the field, allowing him to gain time on the long straights. There was a sniff of a podium

As Hamilton and Vettel came to blows at the head of the train of cars in the incident the race would be remembered for, the cars behind were more civil in their preparations for the restart. Stroll was perhaps too relaxed, failing to tuck into the slipstream of the cars ahead as they began on the vast main straight. In the sister Williams, Massa was trying a move on Vettel for second, but Stroll had to instead check his mirrors as Nico Hulkenberg lurked behind.

After defending from Hulkenberg, Stroll picked up three positions when the Force Indias of Ocon and Sergio Perez clashed at Turn 2, dropping both to the rear of the field. It left debris strewn across the track, part of which was caught by the luckless Raikkonen, causing him to slow. The stewards promptly red flagged the race to allow the track to be cleared.

The red flag allowed all of the drivers to take a free set of tyres that would see them to the end of the race, all being well. Stroll sat fourth for the restart trailing Hamilton, Vettel and Massa. This time around, he managed to quickly get into Massa's slipstream and momentarily pass for third, only for Ricciardo to slingshot his way past both Williams cars and grab the position. 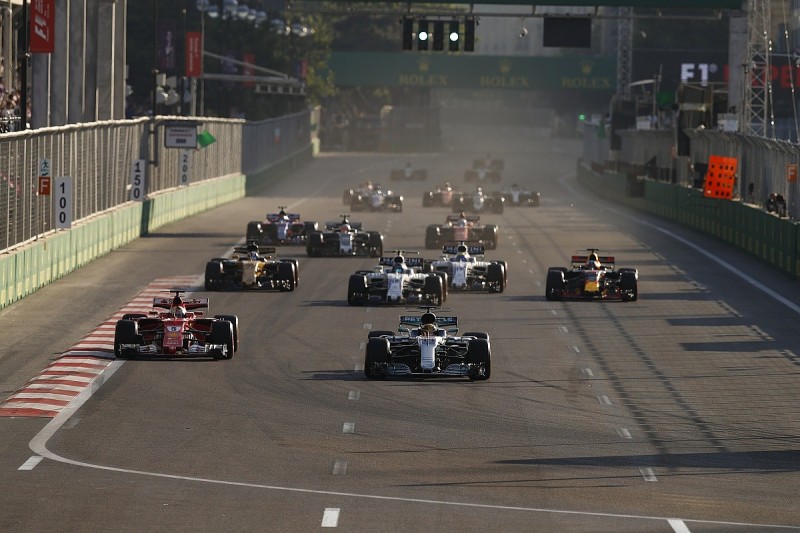 Massa's struggles would not end at losing two positions, with Hulkenberg and Kevin Magnussen both easing past on the next lap. The Brazilian reported his car was "shaking" and "very difficult to drive", before being informed he had a broken rear damper, forcing him to retire from the race. Hulkenberg also retired soon after following a clip with the wall.

Massa's drop in pace gave Stroll a buffer to the cars behind, allowing him to focus fully on chasing Ricciardo. This was a time when the Mercedes power unit was the class of the field, allowing him to gain time on the long straights. There was a sniff of a podium.

While Ricciardo had moved out of DRS range within five laps of the race restarting, Stroll was still able to pick up a position soon when race leader Hamilton's headrest came loose. Mercedes tried advising him to put it back in place on the main straight - no easy job at 200 mph - but sensibly decided to call the world champion in for a change with 20 laps to go.

As Hamilton peeled into the pit lane, the stewards confirmed that Vettel had been given a 10-second stop/go penalty for "dangerous driving" under the safety car. The disgruntled Ferrari driver served his sanction two laps after Hamilton had pitted, coming out in seventh place, one place ahead of his title rival.

All of that drama had put Ricciardo into the race lead for Red Bull, with Stroll 3.5 seconds behind. Magnussen now ran third, 13 seconds behind the Williams, but the man to watch was Bottas in fifth. Fighting back after his first-lap clash with Raikkonen, the Finn had passed Marcus Ericsson, Stoffel Vandoorne, Romain Grosjean, Carlos Sainz and Fernando Alonso after the red flag. A brake issue caused Magnussen to drop back before a pass at Turn 1 on Ocon gave Bottas third with 13 laps to go, needing to make up one second per lap to stand any chance to catching Stroll.

The gap started to erode away as the chequered flag neared. Bottas set a series of personal bests to carve into Stroll's advantage, but the Williams driver was hardly easing off, setting his fastest lap of the race with seven to go. 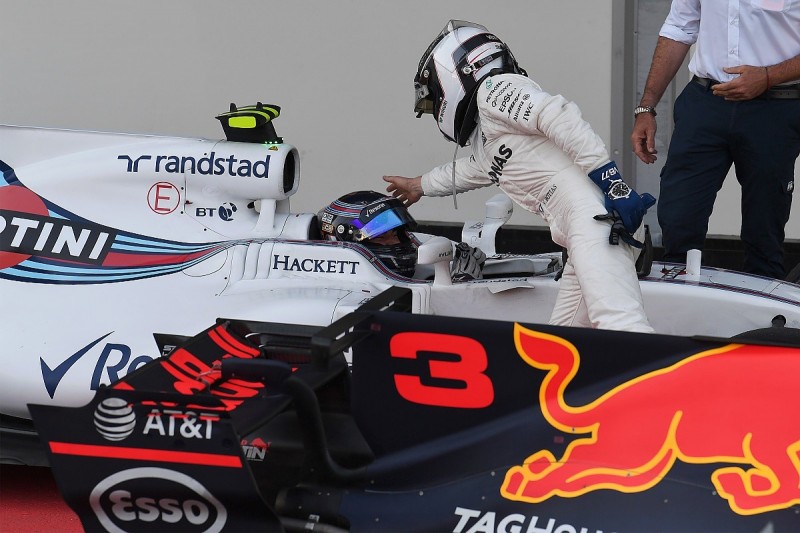 Come the final lap, Bottas was well within striking distance. He got a better exit at the bottom of the hill at Turn 16 before keeping his foot planted through the series of kinks, then opening DRS as they hit the main straight. It left Stroll powerless to defend, Bottas duking his car to the right metres before the finish line. The Mercedes driver had done it, nabbing P2 by 0.105 seconds.

But it did little to spoil Stroll's mood. He went up to Bottas in the driver room, smile wide and said: "That was a close one, buddy!" Both Bottas and Ricciardo - by now podium regulars - were quick to congratulate their young colleague, who kept shaking his head in disbelief on the podium. His father, Lawrence, looked on from parc ferme, clearly emotional at the enormity of the achievement.

"I don't think it proves a point," he said. "I don't listen to that stuff, it is just noise. I had it last year when I had the perfect year and this year when I had some tough times" Lance Stroll

"I'm just lost for words right now, that was a hectic race," Stroll said on the podium after being doused in champagne. "That was probably one of the closest finishes of all-time! What a race. I couldn't believe coming into the weekend I'd be standing here on the podium. It's amazing."

Then-Autosport Grand Prix Editor Ben Anderson gave Stroll a 9/10 score in the post-race ratings, calling him "a driver transformed". It had certainly gone a long way to hitting back at his critics - but Stroll himself didn't care for that.

"I don't think it proves a point," he said. "I don't listen to that stuff, it is just noise. I had it last year when I had the perfect year and this year when I had some tough times.

"I am just happy with myself. It is all just noise in the background. I don't care." 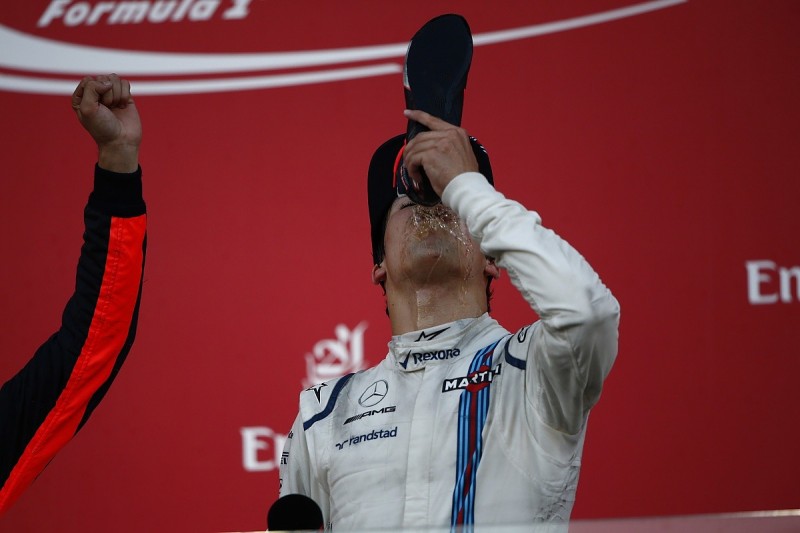 Stroll had risen above the noise to not only score a podium, but cement his place in the F1 history books. He became the second-youngest ever driver to score an F1 podium, Max Verstappen being a mere 11 days younger than Stroll when he scored his 2016 Spanish Grand Prix victory.

In terms of an outright record, Stroll is youngest driver in F1 history to score a podium in their rookie season.

And with superlicence requirements now as they are post-Verstappen, it is unlikely Stroll will be displaced from either of those positions. Now preparing to begin his fourth season in F1 with a Racing Point team that is aiming to be the class of the midfield in 2020, he will be hoping to add to his podium tally in the not-too-distant future. 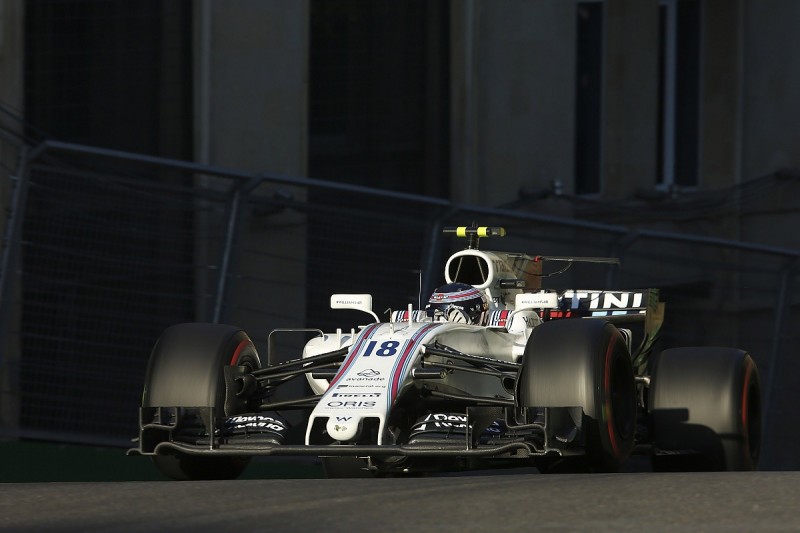