The pack headed out en masse at the start of the one-hour session – the teams’ only chance to get prepared ahead of Friday’s qualifying session and the two races to come.

All cars ran the medium tyres in the early stages, with Alpine’s Fernando Alonso setting the first place benchmark at 1m09.438s.

That was soon beaten by Verstappen’s 1m08.656s and Kevin Magnussen’s 1m08.501s before the former established himself as the frontrunner on the yellow-walled compound.

On a lengthy run over 12 laps, Verstappen posted a series of fastest times, with his 1m07.720s rounding out the first five minutes.

After backing off, Verstappen was initially unable to go any quicker but after another period of touring slowly he was able to go quicker again on a 1m07.496s.

Just after Leclerc had slotted in with a 1m08.064s that put him 0.5s off his title rival, the session was stopped due to Norris pulling off at the side of the track at Turn 6 – the long and sweeping left-hander at the end of track’s second sector.

Norris, who had reported his engine running in “limp home mode” during the early laps, reported smoke coming from underneath his seat and so decided to stop and jump out of his MCL36 – with the Briton not appearing again in FP1.

The session was stopped for nearly 10 minutes, after which the Ferrari duo led the switch to the softs and the mid-session qualifying simulation runs.

Silverstone winner Sainz used his first lap on the red-walled tyre to move ahead of Verstappen on a 1m07.149s before Leclerc, running a few seconds behind his team-mate, shuffled him back to second with a 1m06.650s. 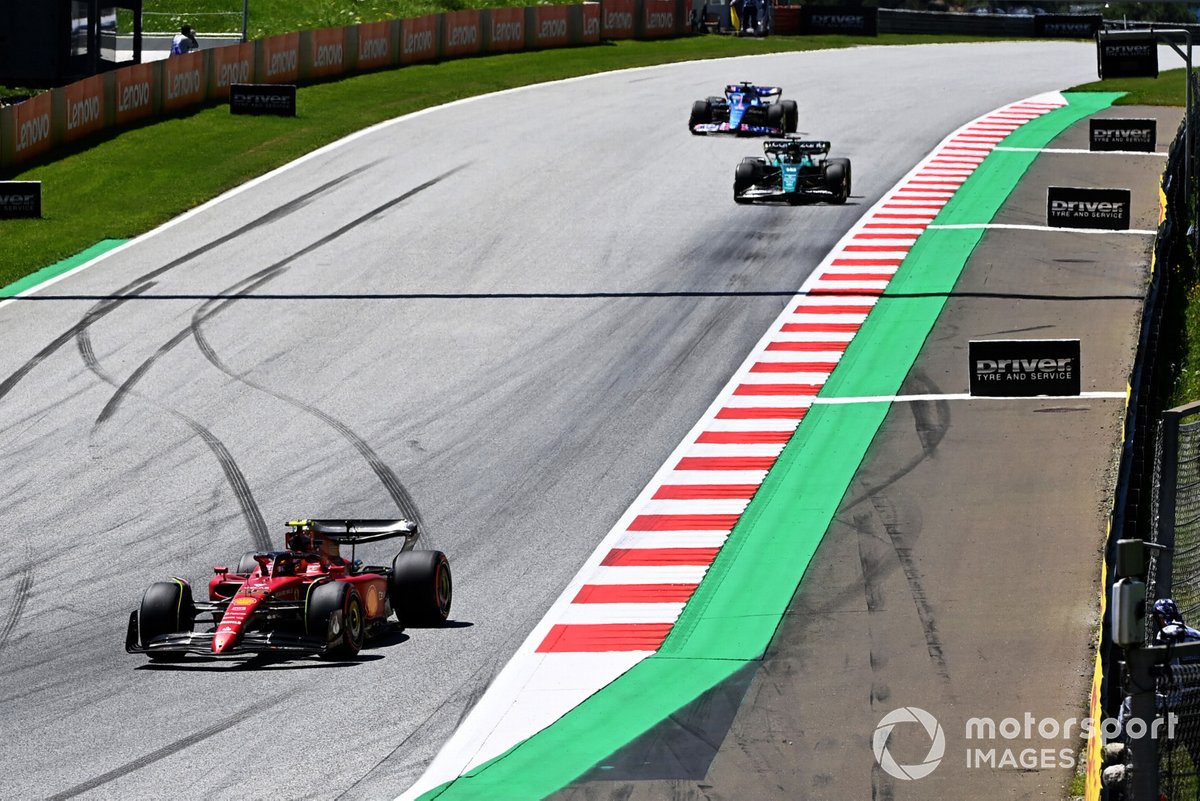 Verstappen had been the third driver to emerge on the softs a short while after the Ferrari team and he then forged back ahead with a 1m06.302s that featured a big gain on Leclerc in the opening sector, a more modest faster time in sector two and then Verstappen falling back slightly by the end of the lap.

A few minutes later approaching the session’s 40-minute mark, Verstappen put in a second flier on the same set of softs that come in 0.1s slower than his personal best, with few other cars yet to switch to that compound.

The session was then interrupted by a second red flag as a rubber strip was spotted lying just off the racing line at the exit of Turn 6, which meant six more minutes were lost as it was retrieved and the cars returned to the pits.

When the session’s final quarter commenced as the red flag period ended, the rest of the pack were finally able to complete their soft tyre runs, with Sergio Perez the first to do so in the second Red Bull.

The Mexican driver, who had requested his team hurriedly switch his set-up “in the other direction” after the early laps, slotted into fourth but was nearly a second slower than his team-mate.

Perez was therefore shuffled down the order as others improved, with Lewis Hamilton getting ahead of Sainz to run third – 0.607s behind Verstappen’s leading time – as the final 10 minutes of the session approached.

Russell then pipped his team-mate to take third with a 1m06.776s, which was 0.474s slower than Verstappen, as Magnussen also got in ahead of Sainz with a flier just inside the final 10 minutes.

In the closing moments, Perez, who had improved with a second run on the softs that still left him 0.830s adrift of his team-mate, jumped to fourth a 1m06.838s that followed Leclerc closing the gap to Verstappen at the head of the field with one final effort in FP1’s dying moments.

Perez’s late improvement meant Hamilton, who had a late off at the first corner during the final laps, finished fifth ahead of Magnussen, Sainz and Alonso.

Mick Schumacher took ninth in the second Haas, while Yuki Tsunoda rounded out the top 10.

McLaren’s difficult session was compound with Daniel Ricciardo’s car having a recurring DRS problem that meant his rear wing flap was oscillating wildly at top speed, as was the case for Red Bull at several events earlier in the season.

McLaren attempted to fix the problem, but Ricciardo was not confident it had done so until the final minutes, where he produced his personal best – on the medium tyres – that put him 17th in the final order.

That was just ahead of Zhou Guanyu making his reappearance immediately after his Silverstone horror crash, Nicholas Latifi and Norris.