Ferrari's Sebastian Vettel broke the unofficial Albert Park lap record on his way to top spot in third practice, ahead of qualifying for the Formula 1 season-opening Australian Grand Prix

Vettel was the early pace-setter as Ferrari decided to complete a burst of swift laps on ultra-softs in the opening minutes of the session, with he and team-mate Kimi Raikkonen setting the early pace.

German Vettel subsequently improved his time midway through the hour-long session, recording a session's best of 1m23.380s - again set on a set of ultra-soft tyres.

That was enough for him to trump Mercedes drivers Valtteri Bottas and Lewis Hamilton, the pair ending up second and third respectively.

Unlike Ferrari, Mercedes decided to wait until later in the session to complete its runs on the ultra-soft tyre.

Bottas and Hamilton both headed to the track with a little under 20 minutes remaining, with Bottas jumping into second with a 1m23.859s and ending the session the faster of the two Silver Arrows.

Hamilton wasn't far behind in third and tucked in with a 1m23.870s - although he did go fastest of all in the first sector on his flying lap, only to lose time by running slightly wide at Turn 13.

That wound up being the last of the significant improvements in the top order, as a Lance Stroll crash sparked the first red flag of the day when he hit the wall at the exit of Turn 10.

The Williams driver had just started an ultra-soft run with 10 minutes to go when he side-swiped the wall and rolled to a stop half way down to Turn 11.

The stoppage was long enough for the session not to be restarted. 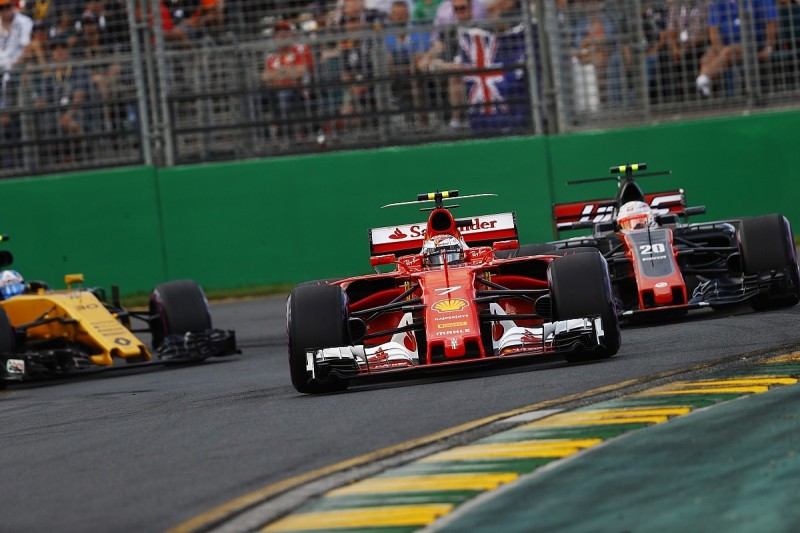 Raikkonen ended up fourth in the second Ferrari, the Finn having suffered a puncture early on in the session - while his engine also cut out on the approach to Turn 13 as he ran up the escape road.

His best time was a 1m23.988s, with that effort more than a second faster than the next best car of Nico Hulkenberg.

Behind the Ferraris and Mercedes, Renault driver Hulkenberg was the best of the rest as he jumped from 10th to fifth late on with a best effort of 1m25.063s, also set on ultra-soft tyres.

That was enough for him to displace Daniel Ricciardo, who was the fastest Red Bull in sixth - the Australian and his team-mate Max Verstappen, who ended the session in 12th, both struggling to find time on their ultra-soft runs.

Ricciardo finished half a second clear of Romain Grosjean who was seventh in the leading Haas.

The McLarens were 14th and 15th, with Fernando Alonso finishing ahead of team-mate Stoffel Vandoorne.

Antonio Giovinazzi - who was confirmed as a late stand-in for Pascal Wehrlein before the session - completed 18 laps to end up just over a second behind Sauber team-mate Marcus Ericsson.