Ricciardo topped the timesheet in both of Friday's practice sessions, while team-mate Max Verstappen was fastest in final practice, Q1 and Q2, but missed out on pole by just over three tenths of a second in Q3 at the Marina Bay F1 circuit.

Ricciardo suggested Red Bull could dominate the Singapore GP after his strong showing on Friday and still expects victory in Sunday's race, despite only qualifying third.

"I am still confident we will get victory," said Ricciardo. "We have a good package. Seb turned it on in qualifying but we will be back tomorrow.

"Today I will accept a little bit of defeat but there is still a lot to play for. It is on cusp of one or two stops, so it could be exciting."

The Renault engine is known to lack power compared to Ferrari and Mercedes in Q3 mode, but Ricciardo still felt Red Bull had a realistic shot at pole.

"I thought pole would be on but we couldn't quite run with him [Vettel] in this qualifying," Ricciardo added.

"It is a long lap, so you gain a bit here and lose a bit there, but three-to-four tenths was quite significant.

"Once qualifying starts we pretty much put it all in, so no secrets for Q3."

Verstappen will line up on the front row after beating Ricciardo to second place on the grid by just 0.026s. 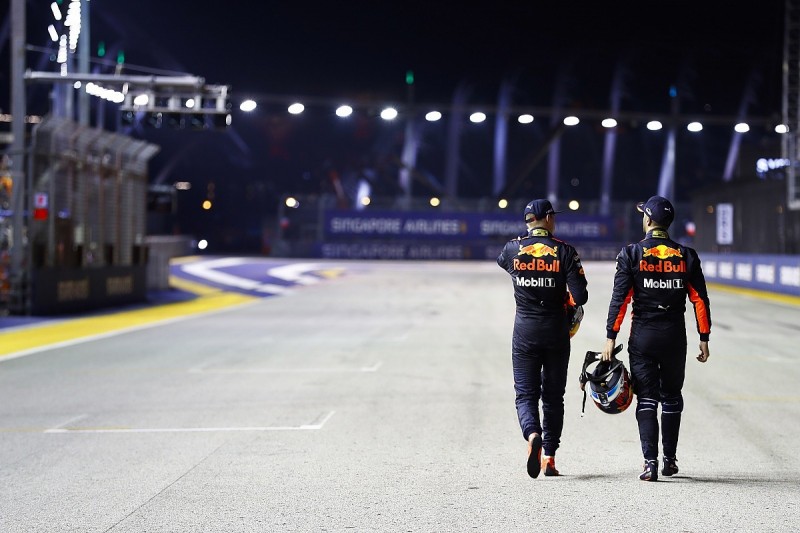 Verstappen failed to improve on his final Q3 run, but was satisfied to qualify second after feeling "down on power the whole weekend" and suffering an electrical problem with his gearbox in final practice that required a steering wheel change.

"It is a shame we couldn't put it on pole," Verstappen said. "The final lap wasn't great but we were close so I am happy with that.

"Qualifying was a constant improvement, even though the whole weekend we were down on power, lost a bit of top speed, so to be second here is very promising.

"We know we still have to work hard to improve [in qualifying] - it is still not where Ferrari and Mercedes is."

Verstappen has got into trouble with aggressive racing at the starts of some races this season, but intends to take the fight to Vettel at the first corner of Sunday's race.

"You always go for it if there is a gap and it is possible," Verstappen added. "If not, you settle down. It is a long race and anything can happen."