Mercedes is expected to arrive at Bahrain's second Formula 1 pre-season test with a much-evolved W13 car. But could a 'zeropod' approach with ultra-slimline sidepods be feasible?

While having no sidepods at all is somewhat detached from reality, there’s good reason to suggest that Mercedes will introduce a new package that shrinks the car’s sidepods considerably more those the team benchmarked for performance in Barcelona.

In order to imagine the direction Mercedes might be travelling in, we only have to look as far as its powerunit customer Williams. The Grove team's extreme sidepod and engine cover design on its new FW44 features one of the shortest sidepod solutions on the grid.

To achieve this narrow-body effect, Williams has jumped the saddle cooler bandwagon that’s been growing in appeal up and down the grid. Red Bull, Alpha Tauri and McLaren have all used more expansive solutions to reduce the sidepods' size by mounting larger coolers above and around the powerunit. While this comes at the expense of having weight situated much higher than is normally the case in F1, aerodynamic performance is a greater priority.

Mercedes will unveil its highly anticipated upgrades when the second test gets underway on Thursday. But the cooling system of the car may remain unchanged, with the team focusing its efforts on producing a more aerodynamically-efficient bodywork package overall, instead of moving to the saddle configuration.

This new package will also be aided by the Silver Arrows’ approach to its chassis design and how this allows it to install the radiators within the sidepods. On the Williams, a triangulated chassis shape accommodates the fuel cell, energy store and connecting points for the powerunit. 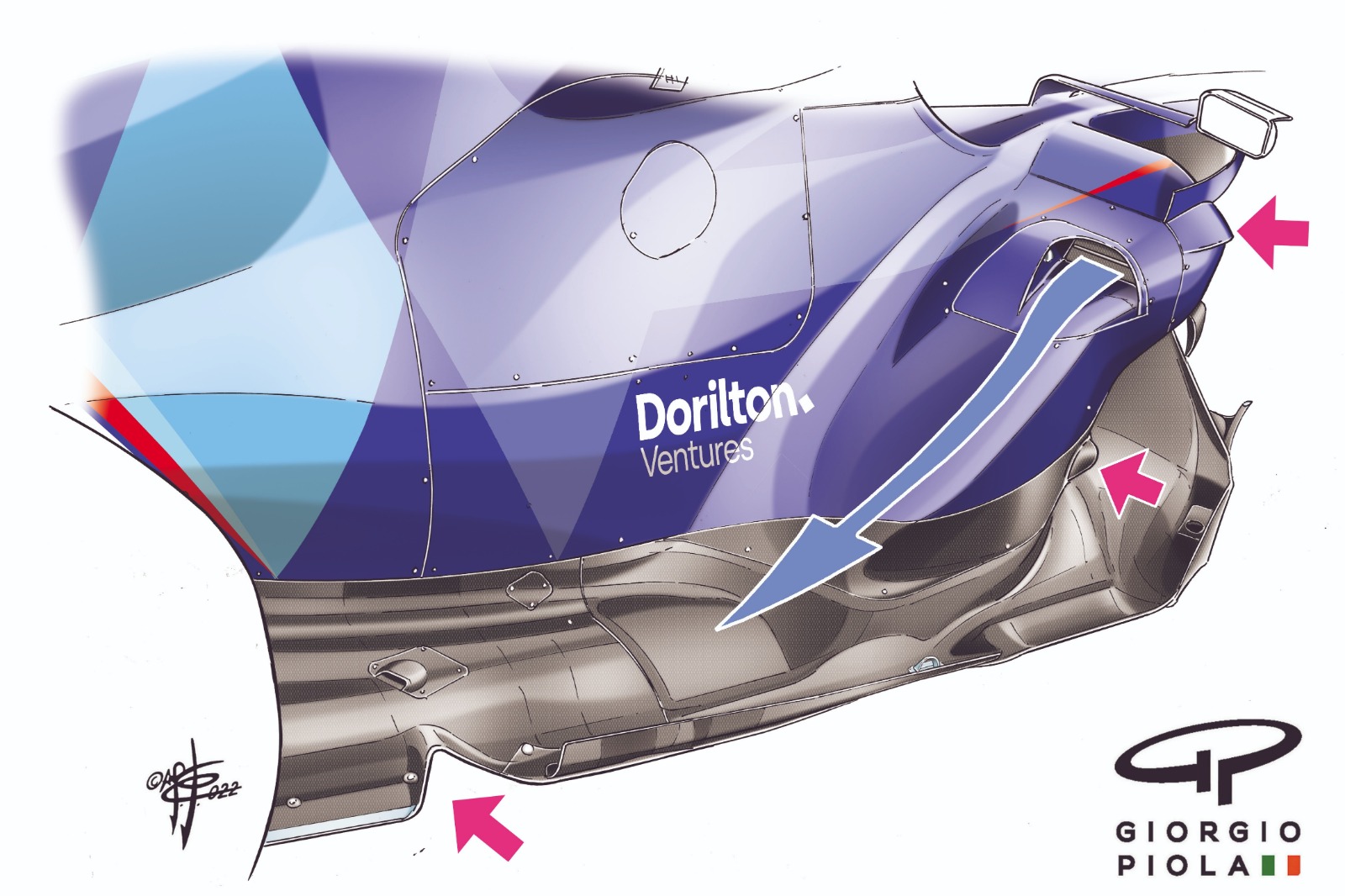 In recent years, Mercedes has taken an interesting design approach to this region of the car, sculpting the chassis in order that the radiators tuck in and reduce the sidepod’s overall width. It seems that the W13 also shares this DNA.

One aspect of the sidepod's design that everyone has had to overcome this year is the presence of the Side Impact Spars (SIS). The regulations governing their position have been altered relative to recent seasons, the intention being to force teams into adopting a more conventional shape with the sidepods and inlets.

However, having improved upon the idea first used by Ferrari in 2017 whereby the upper SIS was slung into a low and forward position and the bodywork used as an aerodynamic fairing around it, all of the teams converged on this solution in 2021. As a consequence, the teams will not easily forget the advantages this offers and many have devised interesting solutions in to accommodate a design which leans heavily on their experience.

As part of this design scheme, the overall width of the sidepods are largely dictated by the SIS, which cannot be ignored. In the case of the Williams FW44’s sidepods, it helps with the design of the passthrough duct, as the uppermost SIS creates the horizontal divide within the inlet.

The Mercedes that was presented in Barcelona did not go to the absolute extremes of some of the others on the grid, whereby the bodywork very tightly wraps around the outer end of the SIS to create a blister. Therefore, this could be just one avenue that Mercedes pursues in order to achieve its aerodynamic goals.