Charles Leclerc "put everything in the bin" with German GP crash

Leclerc was running second following two quick calls from Ferrari to pit him during the two virtual safety car periods at Hockenheim, which had helped him climb from 10th on the grid.

But, just as he was closing in on then-race leader Lewis Hamilton, Leclerc, who had just switched to slicks on the still-damp track, crashed out at low-speed when a mistake put him on the low-grip wet asphalt beyond the track's final corners.

His retirement followed a disappointing qualifying session for Ferrari in which power unit problems put Leclerc and his team-mate Sebastian Vettel down the order on the grid when the team appeared to have the pace to take pole position having dominated practice.

When asked what positives he would take from the weekend, Leclerc said: "We were quick, then of course in qualifying things didn't go our way and it's a shame for the team.

"But [in the race] they did everything right - strategy was amazing.

"They put me in the position to fight for a win and I put everything in the bin.

"So I feel sorry for them and for the fans that supported me.

"We were very quick. I'm very sorry - being sorry doesn't mean anything in these moments because it's too late - but I'm feeling sorry for the fans, for the team in general.

"It's just a shame. It was a great race until then, I think everything went pretty smooth and one mistake was enough to put everything in the bin and that's what happened." 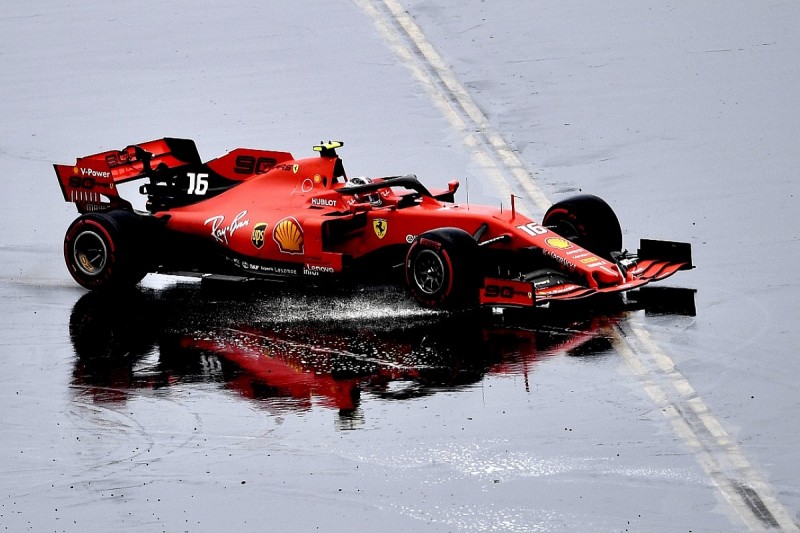 After the race Leclerc branded the asphalt beyond the track at the corners where he went off - which is used for drag racing - "unacceptable".

In additional media interviews he called it "undriveable" and "dangerous", but also added he has "the full responsibility of the mistake".

"But I have to admit that for me it's unacceptable to have such Tarmac after the kerb, which is the dragster track," he continued.

"On the wet it's just undriveable - it makes it dangerous.

"I think I went on this tarmac at maybe 70km/h [44mph] or something like this and lost the full control of the car, which should not happen on a Formula 1 track.

"Again, I take the full responsibility - it's not an excuse of my mistake. But this type of Tarmac shouldn't be on a Formula 1 track."