McLaren Formula 1 driver Lando Norris says he would "rather be last" than fastest on the first day of 2022 pre-season testing as it will increase expectations on his team.

Norris used the soft C4 tyre in Wednesday's afternoon session to lead the way with a 1m19.568s lap, over half a second quicker than Ferrari's Charles Leclerc.

But the Briton, who completed 103 laps in his McLaren MCL36, said he was more interested in gathering valuable data for the team on F1's first day of on-track running, and dismissed that fans and observers would now start getting too excited about McLaren's potential pace.

PLUS: What we learned from the first day of F1 2022 pre-season testing

"It's way too early to tell anything, of course," Norris said.

"I think we've made some good improvements from the beginning of the day, but we're only on day one of the season and even if we're amazing now, everything could change by the time we get to the first race.

"And the rate of development everyone's going to bring to the first half the season is going to be extremely high.

"I didn't want to be P1. If anything, I would rather be last because now the expectations are so high and everyone thinks we're incredible.

"I think we just had a slightly different run plan to the other people. We'll see in the next few days, people will probably go much quicker than what I did." 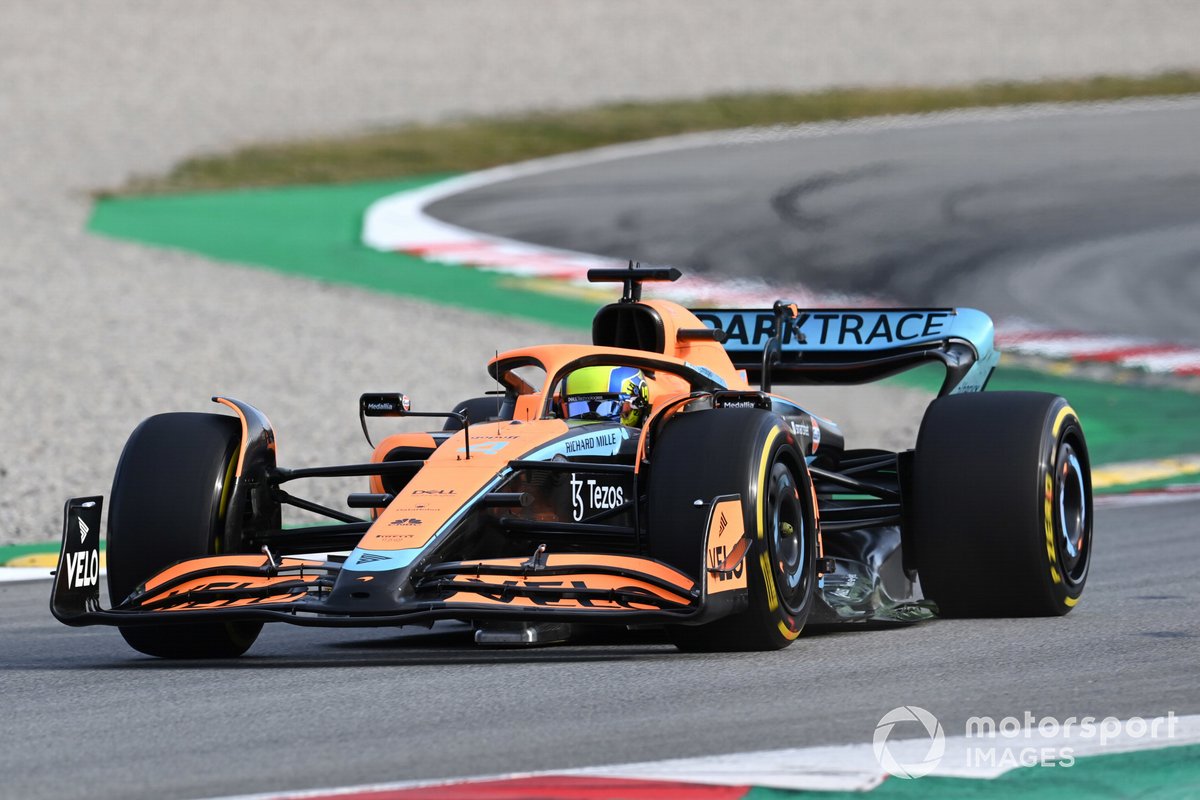 Norris, who said the extra weight on the all-new 2022 generation of F1 cars has made them feel "quite sluggish", was otherwise happy with the solid start McLaren made on Wednesday and explained he felt "confident quite quickly" in the new machinery, which generates much more downforce from the floor.

"But on the whole a lot of it was quite similar and that was good, because it allowed me to get in and feel quite confident quite quickly. I think we did a good job with that.

"There's obviously like a lot of talk about how different the car is, but when I got in I was like 'hey it's not too different to last year'. I think there's just a lot of hype and everyone's expecting so many differences."

PLUS: How the new F1 cars look from the Barcelona trackside

Norris admitted some minor teething issues prevented him from completing all the mileage he wanted, but said it was crucial for the team's development to get over 100 laps in on the first day.

"I would have liked a few more laps. We were planning to do more but we did have a few problems here and there," he conceded.

"But we still learned a lot of things, I think it's still a very important day; especially with the new regulations these days are more important than ever. They're crucial for the development over the next two, three or four months, maybe even more.

"It's important to just understand everything, so we took our time. It's a good start to the test which sets us up well for the next few days."