Saturday's practice session was stopped early after Sainz crashed at Turn 13, with his car stuck under the Tecpro barriers at the end of the run-off area.

He was taken to hospital for precautionary checks and initially expected to stay in overnight, but he revealed on Saturday evening that he had been released.

"I'm OK, I'm fine, just a bit sore from the accident on the back and the neck, but totally ready to see what happens," said the Spaniard.

"Hopefully tomorrow I will wake up in good shape and maybe I can try to race.

"Definitely this is the intention, but we need to be cautious obviously.

"In every moment after the accident I've been conscious, trying to speak with the team on the radio but it was not working.

"I know there were some scary moments out there but I'm glad that everything is fine and thanks a lot for the support."

Sainz's countryman and close friend Fernando Alonso said he was invited to dinner with the Toro Rosso driver for Saturday evening.

"His manager texted before qualifying to say that Carlos wants to have dinner tonight with us," said Alonso.

"We said 'OK, the table will be ready and if you manage to arrive tonight it's OK, if not we postpone for tomorrow'.

"The important thing is Carlos is OK and hopefully we see him here tomorrow at the track.

"We were all really worried at the first moment, and then quickly understood that he was OK and now he's very OK.

"Hopefully he'll be fit tomorrow, even if it's not for racing, to be here with us."

Toro Rosso team principal Franz Tost revealed some details about the crash, which started under braking for Turn 13.

"Prior to the accident, Carlos had completed a long run on the option tyre, before changing to the prime to do two further laps," said Tost.

"On primes the grip level is lower. In addition he had changed the brake shape on the steering wheel, which meant he had more braking rearwards.

"A combination of these two factors might have been the cause of the rears locking, which made the car uncontrollable.

"I hope Carlos will have a good night's sleep and tomorrow morning he will have to go through the FIA medical checks to decide if he will be able to take part in tomorrow's race." 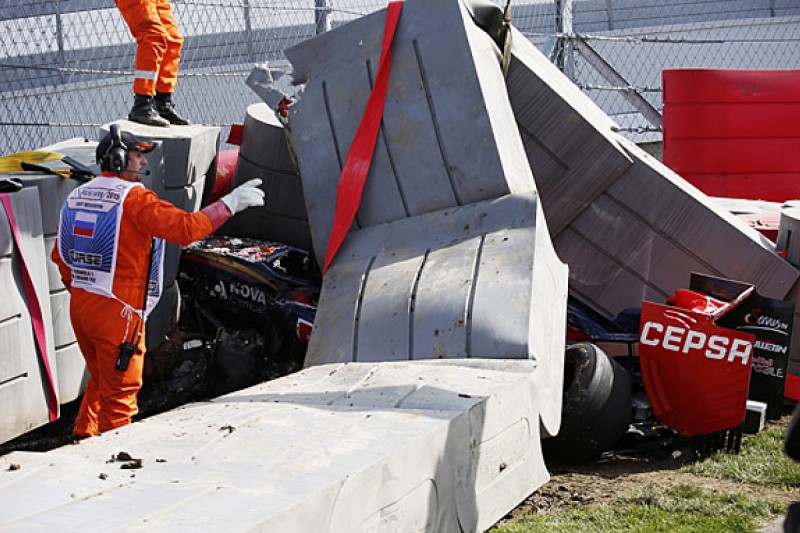