Vettel set the pace throughout the Q3 top 10 shootout, posting a time of 1m10.776s on his first run to take top spot.

He then shaved 0.012 seconds off that time on his second run using the hypersoft Pirellis to make sure of pole position.

Valtteri Bottas was second fastest for Mercedes, but was unable to improve on his first-run lap having lost time in the first and second sectors.

Red Bull driver Max Verstappen made it three different makes in the top three by jumping to third on his final lap, relegating Hamilton to fourth place - just over two tenths slower than Vettel.

Kimi Raikkonen had been third after the first runs in Q3, but ran wide onto the grass exiting Turn 2 on his second set of hypersofts and was forced to abort the lap. He ended up shuffled down to fifth.

Daniel Ricciardo was sixth fastest, lapping just two-hundredths of a second off Raikkonen.

The Ferrari and Mercedes drivers will start the race on the ultrasoft Pirellis, having used that compound to set their fastest times in Q2, with Red Bull and the rest of the top 10 using hypersofts.

The Renault and Force India pattern was repeated on the fifth row, with Carlos Sainz Jr comfortably ahead of Sergio Perez.

Haas driver Kevin Magnussen was fastest of those eliminated in Q2, lapping two-tenths slower than Perez.

That was enough to put him 29 thousandths of a second ahead of Brendon Hartley's Toro Rosso, which is running the upgraded Honda engine package.

Hartley complained about losing a couple of tenths in the final chicane on his quickest lap.

Sauber driver Charles Leclerc was 13th, with McLaren duo Fernando Alonso and Stoffel Vandoorne never looking like a Q3 threat and ending up 14th and 15th - separated by just 0.009s.

Alonso complained about poor drivability out of the hairpin on his last run, but Vandoorne suggested over the radio that this pace was representative of McLaren's capability this weekend.

All five of those drivers had been in the drop zone after their first runs in Q2, but despite all finding time on their second set of hypersofts none were able to break into the top 10.

Toro Rosso driver Pierre Gasly, who had an engine change to the old-specification Honda after a problem in final practice, was knocked out in Q1 by last-minute improvements by Alonso and Vandoorne.

Gasly was unable to improve on the pace he set on his first Q1 run having been 11th at that stage, meaning he was shuffled down the order in the final minutes and ended up 16th

Williams duo Lance Stroll, who had an off-track moment at the final chicane on his last run, and Sergey Sirotkin were 17th and 18th respectively, effectively last of those not to hit trouble.

Sauber driver Marcus Ericsson hit the wall exiting the Turn 8/9 chicane on his first run, and sustained damage that left him 19th.

Haas-Ferrari driver Romain Grosjean was unable to run at all after suffering what appeared to be an engine failure as he headed towards the end of the pitlane billowing smoke at the beginning of the session. 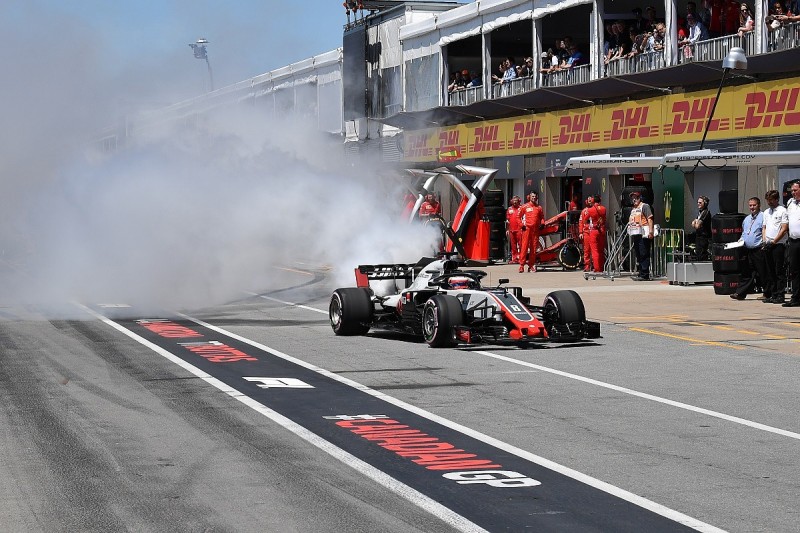