Verstappen moved to the top of the order for the first time with 30 minutes remaining in the session, at that point going half a second faster than Hamilton.

After backing off for a lap before pushing again, the Red Bull driver went even faster to post a 1m13.302s, but Hamilton was also improving at the same time, eventually bringing the gap down to less than one tenth of a second, using the ultrasoft compound while Verstappen ran the hypersoft.

It was not a completely smooth session for Verstappen, whose running was disrupted by a puncture on debris at the Turn 10 hairpin early on and a later stop to remove a flapping carbon shroud from his car.

Shortly after Verstappen and Hamilton's benchmark laps, Daniel Ricciardo moved into third on fresh hypersofts, which pushed the second Mercedes of Valtteri Bottas - like Hamilton running ultrasofts - down to fourth.

Bottas lost another place in the closing stages when Sebastian Vettel put in a late run on hypersofts, initially going seventh with his first attempt before climbing to fourth on his next try.

Kimi Raikkonen completed the top six, while Fernando Alonso claimed best of the rest honours for McLaren in seventh.

Alonso and team-mate Stoffel Vandoorne - who also ended the session inside the top 10 - spent the early part of the session trading times at the top of the order with the Mercedes drivers, although the McLarens were using softer tyres.

There was a prolonged break in the middle of the session when Nico Hulkenberg's car stopped on track shortly after the hairpin, forcing a red flag.

Though Renault got the German to try several different ways of getting the car going again, he eventually had to give up and climb out so a recovery vehicle could lift the car away.

Hulkenberg's team-mate Carlos Sainz Jr split the McLarens in the final order to claim ninth, while a late effort from Pierre Gasly got Toro Rosso into the top 10. 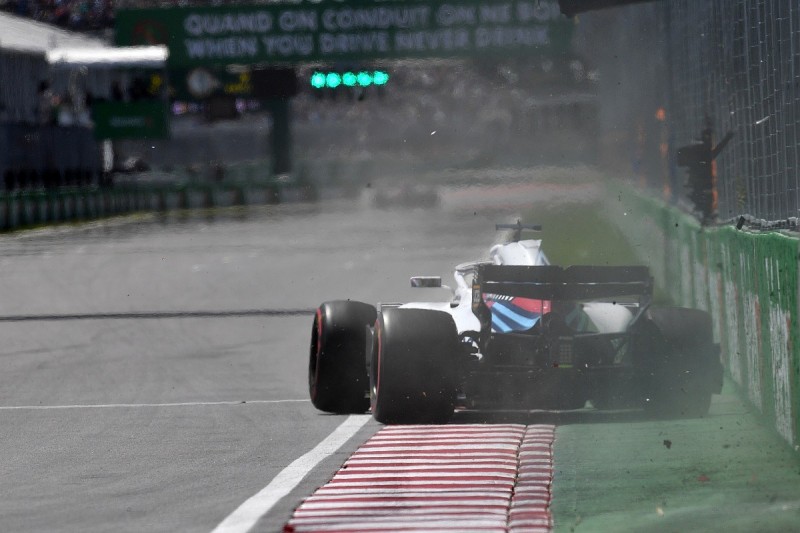 Home driver Lance Stroll was the only driver to hit the infamous 'Wall of Champions' in the opening session, clipping the barrier just inside the final 30 minutes and giving himself a right-rear puncture that he had to nurse for a full lap to get back to the pits.

Beyond that, the session was relatively incident free until the final few minutes, when Marcus Ericsson spun at Turn 8, Sergey Sirotkin spun into the barriers at Turn 6, and Brendon Hartley went off at Turn 1, blaming a loss of downforce from following another car.

Alonso provided some late entertainment in the session as well, lunging Raikkonen's Ferrari at Turn 1, and then scrambling through Turn 2 off-line to maintain track position ahead of the 2007 world champion.