With the session commencing with an 80% chance of rain, most drivers opted to get out on track early on before the bad weather had chance to hit, which it finally did in the final 20 minutes.

Valtteri Bottas, who has been hit by a five-place grid penalty for a gearbox change, led the way in the opening runs on soft tyres, setting an early benchmark of 1m28.827s in the first 10 minutes.

His Mercedes team-mate Hamilton then took the top spot with a 1m28.747s on the yellow-marked rubber, which stood as the best time until he put on super-soft tyres just shy of the halfway mark and set a 1m28.063s to go seven tenths clear of the pack.

Bottas was only able to come within 0.151s of Hamilton on his first run on super-softs, and it was Ferrari driver Vettel who emerged as the three-time champion's closest rival as he slotted into second, just 0.032s adrift.

With the rain arriving 15 minutes later, Hamilton's effort stood as the best time of the session - and the weekend so far - with Vettel staying second and Bottas improving marginally to complete a top three covered by just 0.074s.

Kimi Raikkonen was fourth-fastest in the second Ferrari, a full 0.669s behind Hamilton on the super-soft tyres, and nearly eight tenths up on fifth-placed Nico Hulkenberg in the Renault.

Best of the Red Bull drivers was Daniel Ricciardo in sixth, 1.549s slower than Hamilton, followed by the Haas of Romain Grosjean and Max Verstappen, whose best time was set on softs.

Verstappen did attempt a super-soft run, but left it too late and was caught out by the rain, running off-track at Brooklands and quickly returning to the pits.

Besides Verstappen, the only other drivers not to set their best time on super-softs were Toro Rosso's Carlos Sainz Jr, who was 17th-fastest, and the second Williams of Lance Stroll, who propped up the timesheets, 1.4s slower than Massa.

All drivers headed out in the closing stages of the session on intermediate tyres, an extra set of them having been supplied by Pirelli for the session.

A handful of late incidents showed how tricky conditions had become - Ricciardo spinning but avoiding the wall exiting Club and Marcus Ericsson pirouetting on the approach to Vale. 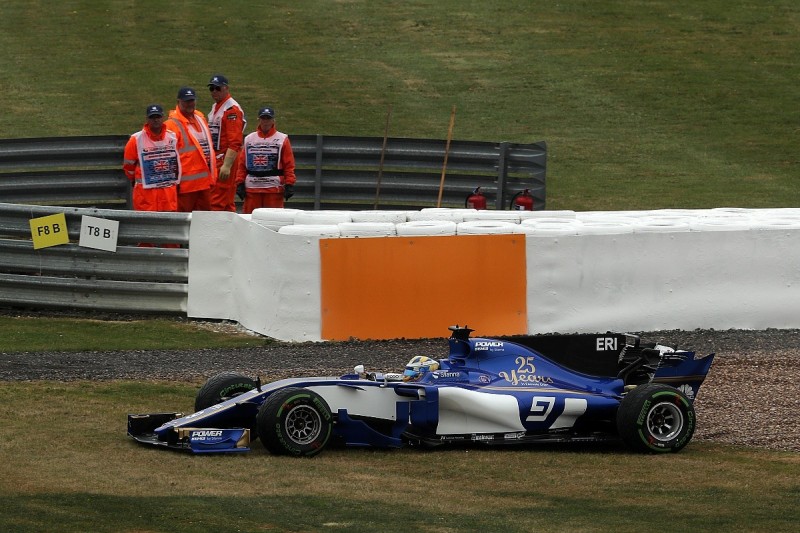 McLaren expects Fernando Alonso to stay in Formula 1 in 2018