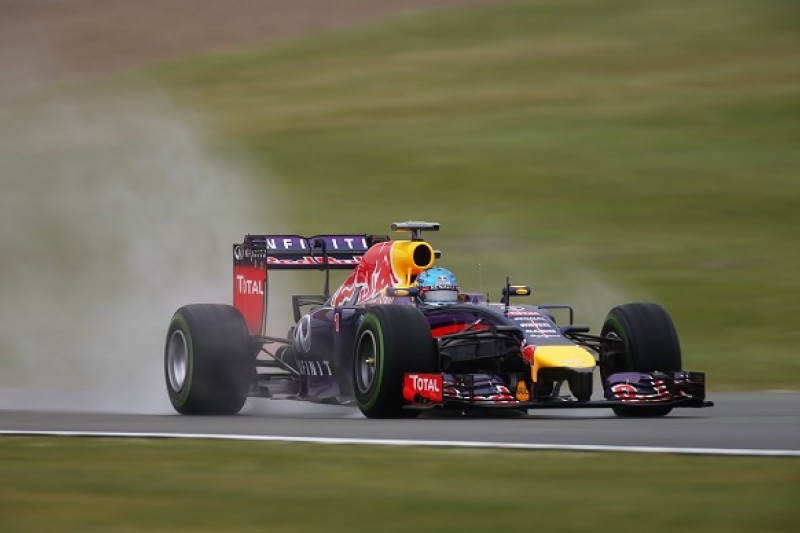 Vettel, who had a moment at Becketts shortly after setting his session-topping 1m52.522s, edged his team-mate by 0.109s. Both drivers completed just six laps.

Running conditions were very different after overnight rain, and the only consistent factor was the gusting nature of the wind, now blowing from the northwest rather than the south.

The track briefly began to dry during the opening minutes of the session before a fresh bank of rain blew in, and most teams therefore took a conservative approach.

Neither Williams drivers set a time until the final minutes, and both Mercedes drivers aborted potentially quick laps before ducking back in to the pits. Lewis Hamilton was provisionally half a second quicker than Vettel before running off-track at Stowe and heading immediately to the garage.

Lotus drivers Pastor Maldonado and Romain Grosjean were third and fourth fastest, Maldonado completing 10 laps while Grosjean called it a day after spinning at the exit of Club and nearly hitting the pit wall.

Adrian Sutil was fifth quickest, setting his best lap on intermediate tyres just before the end of the session. Sauber team-mate Esteban Gutierrez struggled to match Sutil's enterprise under braking and finished outside the top 10.

Toro Rosso's Daniil Kvyat was an impressive sixth fastest and ran the most number of laps (15), encountering a wide variety of track conditions and testing the limits of his car on a number of occasions.

Kimi Raikkonen was the only Ferrari driver to set a time, though he completed just five laps, with Fernando Alonso and both Mercedes at the foot of the timing screens without a flying lap to their names.

Max Chilton was another not to set a time, the Briton suffering a terminal gearbox problem on his installation lap that required the team to fit a new gearbox, which will mean a five-place grid penalty.

Free feature: Hamilton fastest, but does he have race pace?