Red Bull's Daniel Ricciardo says he understands Sebastian Vettel's "frustration" over the FIA's use of its weighbridge during Formula 1's Brazilian GP qualifying, and that the rule should be changed

Vettel was stopped by the FIA for a weight check early in Q2 after competing only an out lap after Ferrari decided to switch from supersoft to soft tyres.

With rain threatening, Vettel showed his obvious frustration by knocking over a marker cone, initially not switching off his engine, and driving off the scales under his own power, which broke them.

After a hearing he was given a reprimand and fined €25,000 euros for failing to obey the instructions of officials.

Ricciardo says that drivers should be allowed to set a banker time before being called to the weighbridge, and suggests that the matter could be discussed at the next drivers' briefing at Abu Dhabi.

"If I was in his position, I'll be frustrated as well," said Ricciardo when asked about Vettel by Autosport. 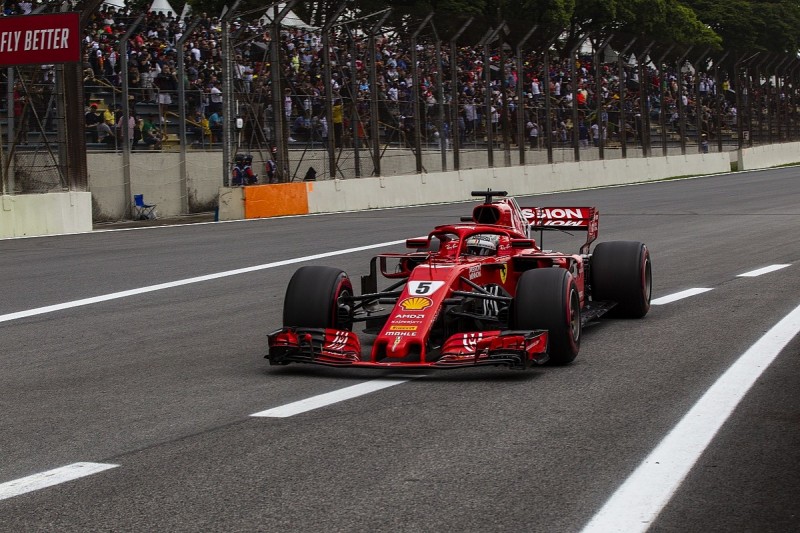 "Because rain's coming, he hasn't set a lap yet, I guess in simple terms, they're just postponing his qualifying and putting him at risk.

"I think we're going to talk about it probably in Abu Dhabi now, but we might have to try and add something in - like you can only be called if you've set a lap.

"I think calling you to the bridge before you've set a lap, they're kind of controlling your qualifying session, which I think is a bit unfair.

"So from that point of view I will, let's say, sympathise with Seb." Asked about the normal procedure Ricciardo said: "Well, you've got to switch you car off, then the mechanics have to come, start it up.

"You lose, I couldn't put a time on it - call it a minute or something. But, again, if the weather's like that, it's not ideal.

"They called me in in Suzuka, when I had my problem, I hadn't set a time, I've literally come out and come in and they've called me in, and I was a bit like, 'Guys, why do you need me, I've done nothing.'

"But then they saw I'd had problems and let me go. But I kind of feel we need to set a lap before they call us on."