Hamilton was one of the favourites for pole after leading Friday practice and trailing Mercedes F1 team-mate Bottas by just 0.003 seconds in FP3, but Hamilton crashed heavily at the high-speed Ferradura right-hander on his first flying lap in qualifying.

Hamilton lost the rear of the car suddenly mid-corner and slammed hard into the barriers rear first.

He apologised to his team on the radio before emerging unscathed, but took no further part in the session.

Hamilton's first Q1 exit since the 2016 Belgian GP cleared the way for Bottas to battle the Ferraris single-handedly for pole.

Bottas was narrowly second fastest in Q1, behind Kimi Raikkonen but ahead of Sebastian Vettel, who Bottas then trailed in Q2 and after the first runs in Q3.

The second Ferrari of Raikkonen ended up third quickest, just under two tenths slower than Vettel, while Max Verstappen's Red Bull was the only other car to lap below 1m09s in fourth.

Daniel Ricciardo's Red Bull was fifth, but he faces a 10-place grid penalty for an MGU-H change ahead of practice.

Sergio Perez's Force India completed the top six, ahead of Fernando Alonso's McLaren-Honda, the Renaults of Nico Hulkenberg and Carlos Sainz Jr, and the Williams of Felipe Massa, who almost crashed after gesticulating at Sainz in Q3.

Esteban Ocon failed to make Q3 for the first time since September's Singapore Grand Prix, missing the cut by less than a tenth to Sainz.

Romain Grosjean broke into the 1m09s for the first time this weekend and briefly occupied a provisional Q3 spot, but fell to 12th as others improved at the end of Q2.

Stoffel Vandoorne's McLaren-Honda and Grosjean's Haas team-mate Kevin Magnussen ended up 13th and 14th, both paying the price for failing to break through the 1m10s barrier.

Toro Rosso's Brendon Hartley was 15th, but he used Q2 to practice his start procedures rather than set a time, knowing he faces a 10-place grid penalty for an MGU-H change ahead of practice.

Hartley managed to drag himself narrowly into Q2 at the expense of Sauber's Pascal Wehrlein and Toro Rosso team-mate Pierre Gasly, who all lapped in 1m10.6s in Q1.

Hamilton's crash gave Williams extra time to finish preparing Lance Stroll's car after changing its engine and gearbox ahead of the session, but Stroll could only manage the 18th quickest time, less than a tenth slower than Gasly.

Stroll will take a five-place grid penalty for that gearbox swap.

Marcus Ericsson was another tenth further back in the second Sauber, beating only Hamilton's Mercedes, which failed to set a time. 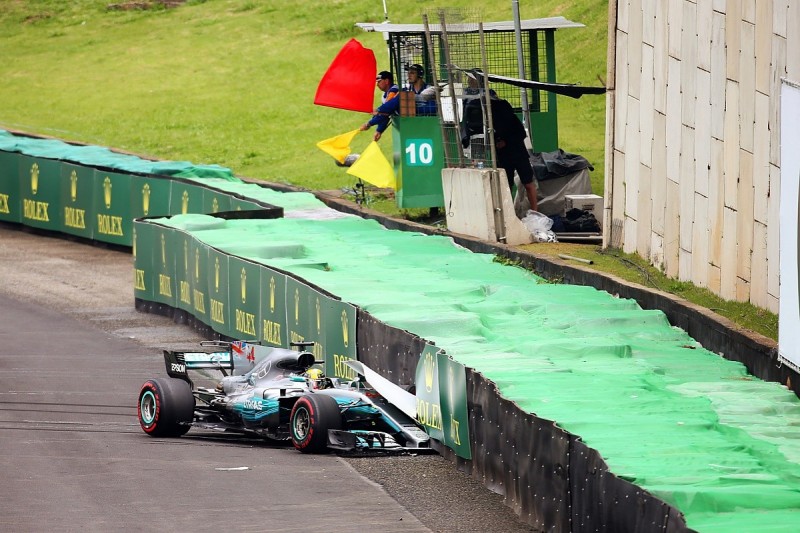 Brazilian GP: Hamilton crashes out of qualifying on first lap