Valtteri Bottas believes his Mexican Grand Prix could have been a “different story” if he had finished on soft tyres, but was glad to outscore Formula 1 rival Aston Martin.

Bottas managed to pick up his first point since the Canadian Grand Prix in June by finishing 10th at the Autodromo Hermanos Rodriguez on Sunday, but had looked set for a bigger haul after lining up sixth on the grid.

Bottas dropped to eighth at the start, but managed to keep Alpine’s Esteban Ocon at bay through the opening stint before making the switch to hard tyres on lap 39.

Bottas was not only undercut by Ocon, who had made the same tyre switch seven laps earlier, but he also lost places to McLaren drivers Daniel Ricciardo and Lando Norris through the final stint, Ricciardo having gone on a late charge with softs.

The Finn came under late pressure from Pierre Gasly and Alex Albon, both of whom also went from mediums to softs, but managed to hold on to 10th place.

Bottas said his race proved to be “difficult, especially the second stint with the hard tyre” as he experienced similar struggles to other drivers who also ran hards for the second half of the race.

“I just couldn’t get the tyre to work, especially the front axle,” Bottas explained. “It was below the working range all the time.

“I think, if I could do the race again, I would for sure go for the soft tyre [in the final stint]. There were some cars that were really flying on the soft tyre.” 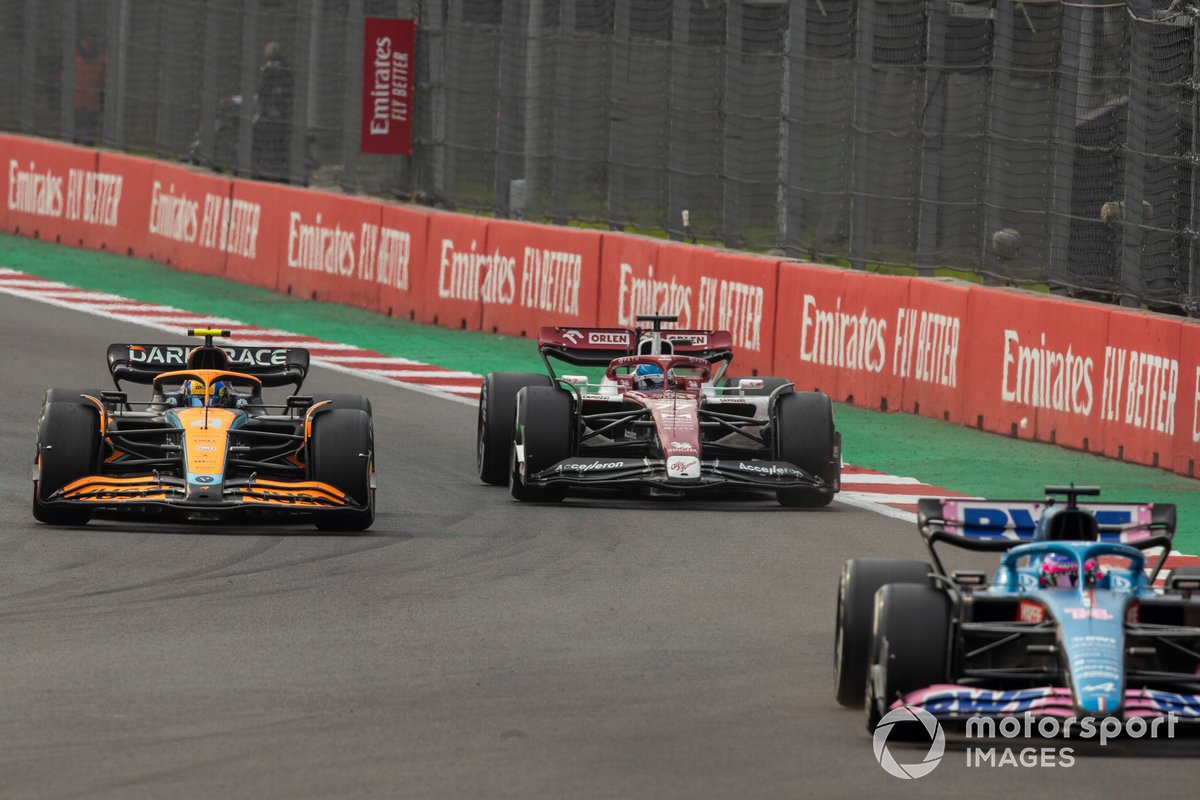 Bottas explained that he tried the hard tyre in FP1 and that it had felt “half decent”, although he admitted it was “easy to say afterwards” he had taken the wrong decision on which tyre to use.

But he took some comfort from scoring the point on a day when Aston Martin failed to make any further inroads on Alfa Romeo in the fight for sixth in the constructors’ championship.

Aston Martin’s recent surge of form had meant the gap fell to just three points ahead of Mexico, only for Bottas’s result to give Alfa Romeo a bit of extra breathing room with two races to go this year.

“With another tyre it might have been a different story,” he said.

“At least it’s one point. I think it’s been 10 races since I last scored points. So that’s something, and at least we scored more than Aston.”

Asked if Alfa Romeo’s pace in Mexico was thanks to its late-season upgrades or simply more track-specific, Bottas expressed his optimism about keeping the form going.

“We were in Q3 in Austin and should have been in the points, so I hope it’s going to be like this for the last two races. I see no reason why we shouldn’t be there.”

Why F1's Mexico GP wasn't as boring as everyone made out