Ferrari made a low-key start to testing on Wednesday with the eighth fastest time on the opening day, where it was behind both Mercedes - which topped the times with Lewis Hamilton's 1m16.976s - and Red Bull.

Sebastian Vettel was able to set a lap 0.2-seconds faster than Hamilton on day two, but he was still adrift of Alexander Albon's effort for Red Bull, and so far on the final day of the first test on Friday Ferrari has lost major running after Vettel suffered an engine failure mid-way through the morning.

In the same session, Mercedes' Valtteri Bottas significantly lowered the best time of testing so far to a 1m15.732s, and afterwards Ferrari team principal Binotto said he is "not as optimistic as last year" because "the others are faster than us at the moment".

"How much faster I think it's really difficult to judge and we'll go through all the data in the next days, but I don't think we are as fast as them at the moment," he continued.

"Do we have any concerns? Certainly, yes - when you are not as fast as you would like to be. But I think it's really [a] too early stage to define them and to understand. 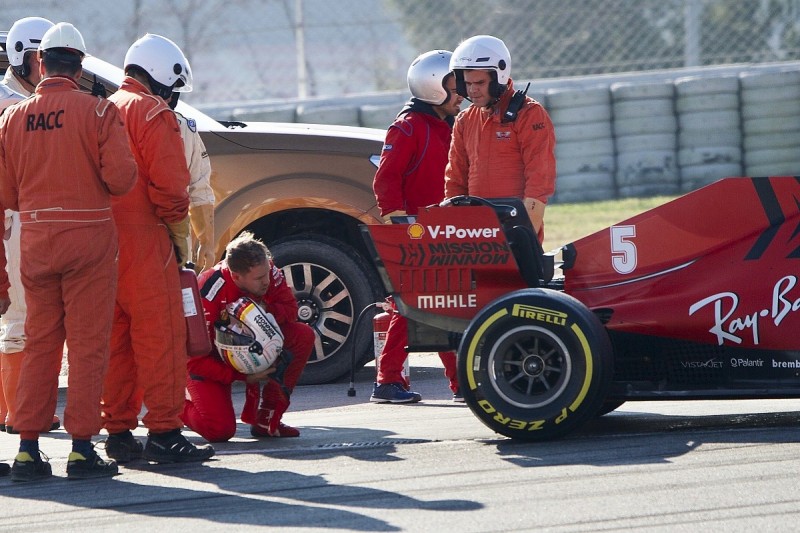 "And so [the] three days for us have been very important because at least we have collected all the data now to have a clear picture and better understanding.

"What will be even more important will be making sure we are developing the car in the right direction.

"Having said that, it's a very long season - 22 races, potentially. So I think there will be time to recover eventually.

"But let's wait for next week and for Australia before to assess what is the true performance for everybody. When asked if the SF1000 was a potential Mercedes-beater, Binotto said: "I think it's a very early stage to decide.

"[But] I think Ferrari will be a beater if you consider the overall of the season. Will Ferrari be a beater already in Australia? Maybe not.

"I've seen certainly Mercedes, and Red Bull, very fast in these first days. But I think we will assess the true performance only next week or in Australia.

"And that will be true performance to start the season with, knowing that 22 races are very long and everything may change."

Binotto also explained that the SF1000 "will not differ much" from testing to Melbourne and said Ferrari will not bring a major update package to Australia.

"But I think the potential is there," he added.

"So at first I think it's [about] optimising the current package and developing it."