Max Verstappen beat George Russell to take pole in a wet qualifying for Formula 1’s 2021 Belgian Grand Prix, which was disrupted by a huge Q3 crash for Lando Norris.

Lewis Hamilton completed the top three, with Valtteri Bottas down in eighth in the second Mercedes.

Rain intensifying ahead of Q3 meant conditions switched back to the drivers needing full wets, after the intermediates had been the tyres of choice in Q1 and Q2.

Norris, who had set the fastest times in Q1 and Q2, reported some aquaplaning on his Q3 outlap, where Sebastian Vettel, following shortly just behind the McLaren, called for the session to be stopped.

After Russell had led the pack into the opening laps of the shootout, Norris’s correction to a slight snap of oversteer through the second part of Eau Rouge sent his car spearing left and into the barriers side-on just before Raidillon and the top of the hill.

The huge impact ripped off two wheels and damaged all four corners of the McLaren, which bounced off the barriers and spun around wildly several times before coming to rest in the runoff beyond Raidillon.

After Vettel had stopped to check Norris was ok, the Briton was able to climb from his car and the session was halted for over 40 minutes as the wreckage was cleared away and the FIA then assessed the conditions to allow for a restart.

When it did, Esteban Ocon and Russell led the pack out on full wets, but they pitted at the end of their outlaps to join the rest of the Q3 runners on the inters. 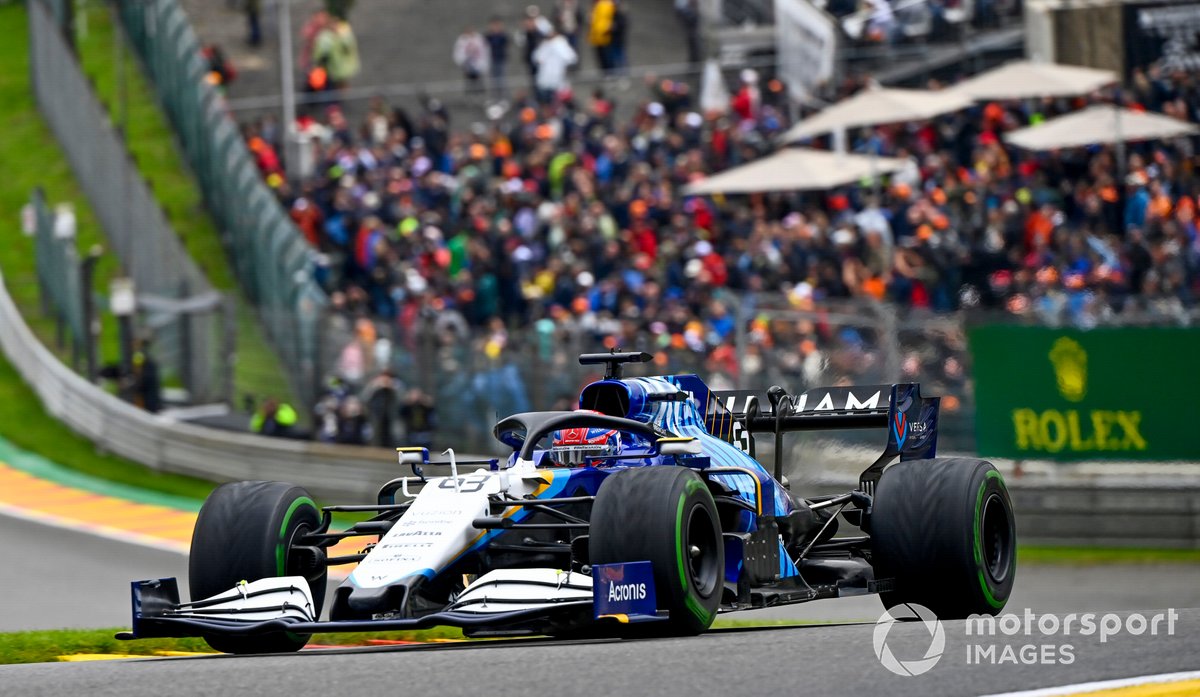 Hamilton and Bottas therefore set the first timed laps of Q3, with Hamilton leading after the first Q3 runs had been completed with a 2m01.552s, while Verstappen slotted in nearly a second adrift of his title rival at this stage.

On the final runs, Russell, who had only just completed his first timed lap on Q3 and gone ninth fastest, stayed on it for a second successive lap and stunned the drivers trailing in his wake by setting what at the time were the best sectors of Q3 in the opening two thirds of the lap.

Russell shot up to provisional pole, while Hamilton, who was following the Mercedes junior, could not beat his countryman and ended up 0.013s adrift.

But Verstappen still had to complete his lap and his fastest Q3 time in the middle sector, allied to personal bests in the other two, meant he snuck into pole at the last moment with a 1m59.765s – the only driver to get under the 2ms bracket in the final part of qualifying.

Daniel Ricciardo took fourth for McLaren, ahead of Vettel and Pierre Gasly, while Sergio Perez, who had been second fastest once all the drivers had completed their first runs in Q3, took seventh – Perez the only driver of the top nine not to set a personal best on his final Q3 lap.

Bottas took eighth but will start five places further back thanks to his grid penalty for causing the crash at the head of the pack at the first corner of the Hungarian GP.

Ocon took ninth, with Norris classified ninth but possibly facing a grid drop if the repairs to his car mean taking new restricted components or starting from the pitlane.

In Q2, the story was mainly about the Mercedes drivers having to pit twice to change their inters after initially being sent out on used sets. 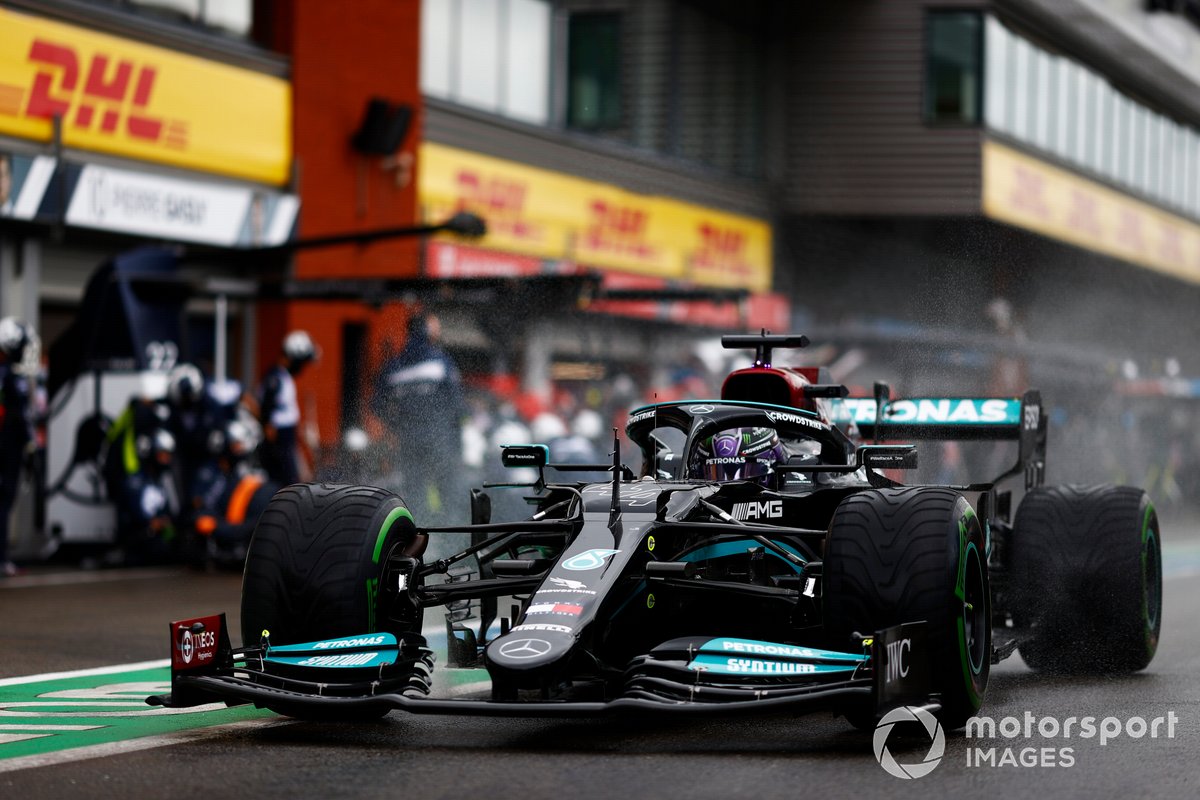 This put them out of sync with the rest of the pack, meaning they spent most of Q2 at the foot of the times and were sitting down in 11th and 12th ahead of the final runs.

But after coming in to take a second new set of inters for Q2 – their third overall in qualifying – Hamilton and Bottas improved enough to get through safely.

Behind them, Ricciardo’s jump with his final effort in Q2 knocked out Charles Leclerc in 11th – the Ferrari driver paying the price for not bettering his personal best times in sectors two and three on his final lap.

Nicholas Latifi took 12th for Williams – his best F1 qualifying result – after being shuffled back by others also improving late in Q2, but the Canadian did set a personal best on his final lap – as did Fernando Alonso on his way to taking 14th.

Either side of the Alpine driver were Carlos Sainz Jr, who pitted at the end of his final timed lap in the middle segment, and Lance Stroll, who missed setting a final Q2 time as he could not complete a late out lap in time.

Like Bottas, Stroll will drop five places on Sunday’s grid for causing the second shunt at the start of the Budapest race last time out.

In Q1, which was delayed by 12 minutes as the FIA assessed how wet the conditions were around the circuit following rain falling ahead of qualifying starting, the Williams drivers led the pack out as the only two drivers running the intermediates.

Although Latifi spun at the Fanges chicane on his first flying lap – going around again on the sodden, puddled-filled grass beyond the sequence – the Williams pair proved that the inters were the tyres to have and the rest of the pack switched from full wets after every driver had completed at least one run. 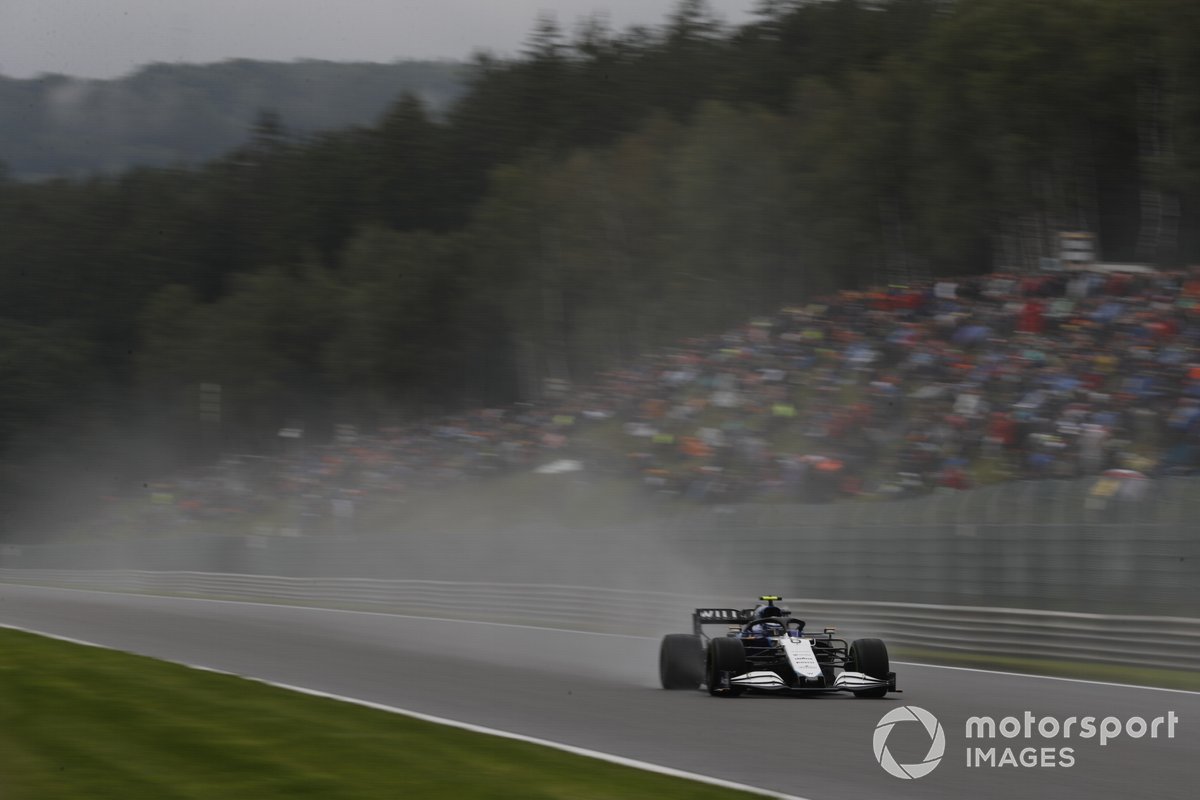 Russell and Latifi were shuffled down the order as the drivers found time with every lap they completed on the inters, despite the threat of further rain falling.

Although several drivers – including Ricciardo, Alonso and Hungarian GP winner Ocon were under pressure come the end of Q1 – personal bests on their final runs from Antonio Giovinazzi and Yuki Tsunoda were not enough to get them through.

The Alfa Romeo and AlphaTauri drivers were knocked out in 16th and 17th respectively, while Mick Schumacher took 18th for Haas despite not completing his fastest time on his last Q1 lap.

Kimi Raikkonen did produce his best right at the end of the opening segment, but that was only good enough for 19th and ahead of Nikita Mazepin at the rear of the field.