Lewis Hamilton topped the opening day of practice for the Belgian Grand Prix, outpacing Formula 1 title rival Nico Rosberg by six tenths of a second in the afternoon

The 90-minute session was interrupted by two red flags during the first half-hour of running, the first caused by a crash for Pastor Maldonado and the second by Esteban Gutierrez's spin.

But Hamilton was not fazed by these brief stoppages and was already fastest, four tenths quicker than Ferrari driver Fernando Alonso, before the second red flag.

He then switched to the soft rubber for his performance run, heading out at the halfway point of the session.

By the time Hamilton set his best time, on his first flying lap on the faster rubber, he had slid down to seventh, with Rosberg having bumped McLaren driver Jenson Button off top spot moments earlier.

Hamilton then outpaced Rosberg in all three sectors, a massive 0.445s of his advantage coming in the middle sector, helped by the German having a scruffy lap.

Alonso was third fastest ahead of old team-mate Felipe Massa, the Brazilian Williams driver showing that his team would again be a podium threat here.

Button ended up fifth fastest, 1.470s down, but he set the fastest overall time in sector one, suggesting he was trying a set-up that was low downforce, even by Spa standards.

Valtteri Bottas was sixth fastest in the second Williams, ahead of Daniil Kvyat, with both drivers briefly being classified as high as second thanks to completing their qualifying simulation laps before some of the frontrunners.

Daniel Ricciardo was down in eighth place after completing his first soft-tyre run later than most while work was being done on his front brakes in the pits, jumping from 15th and bumping Kevin Magnussen and Force India's Nico Hulkenberg down to ninth and 10th.

Adrian Sutil was 12th fastest in the improving Sauber, briefly running as high as fourth before being bumped down the order, behind Jean-Eric Vergne's Toro Rosso, with Sergio Perez down in 13th.

Lotus' Romain Grosjean complained of the rear end of his car being unpredictable on his way to 14th, just ahead of Kimi Raikkonen.

The Ferrari driver endured a difficult session, with a misfire setting in early on and forcing a lengthy stay in the pits.

He returned to the track in the closing stages of the session, but the car was not able to do any better than 15th. 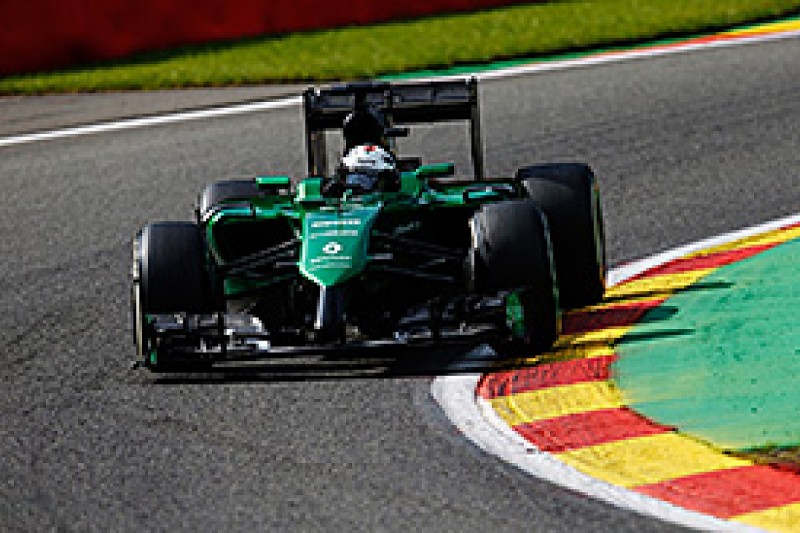 Marussia driver Jules Bianchi was up in 16th, just 3.587s off the pace, although his position was boosted by several others hitting trouble.

Gutierrez ended up 18th after managing only seven laps before he spun at Blanchimont and being unable to rejoin.

Max Chilton, who had yesterday been replaced by Alexander Rossi before earning a reprieve this morning, had sat out the morning session and ended up 20th after his running was hindered by a turbo problem.

Maldonado did not set a time after causing an early red flag when he crashed just after the eight-minute mark.

The Lotus driver drifted onto the grass on the right-hand side of the track run-out of Rivage towards Pouhon and lost control, spearing across the track and heavily into the barrier on the opposite side of the circuit.

But he at least went further than Sebastian Vettel, who was forced to sit out the session as a result of an electrical problem related to the engine in the morning.

This has forced an engine change, which the team did not have the time to do before the afternoon's running.

Mystery remains over Chilton return to the Marussia F1 cockpit