The Caterham driver was one of three, along with Marussia pairing Jules Bianchi and Max Chilton, to try slicks in qualifying.

All three ended up making the cut for Q2, but van der Garde was comfortably the fastest, ending up only 0.374 seconds off pacesetter Fernando Alonso's time.

"It was very slippery and I was sliding around a lot and I was nearly planning to come back to the pits to put inters on," said van der Garde.

"It was very tough and on the first lap it was very hard to get [tyre temperature] so we started to push a lot and I tried to get a lot more wheelspin than normal.

"Suddenly, on the last lap they came in well and the tyre worked out perfectly."

This is the second time van der Garde has reached Q2, the first coming at Monaco where he was also the first to try slick tyres.

"I was the one who gambled correctly again," he said. "It was brave to be out there first on slicks like we did at Monaco but in those moments you don't have a lot to lose, only to win.

"It was good to see myself in P3. I like these conditions and like to take a little risk sometimes, which paid off well today.

"The team did a very good job by changing [the tyres] quickly so I'm very happy." 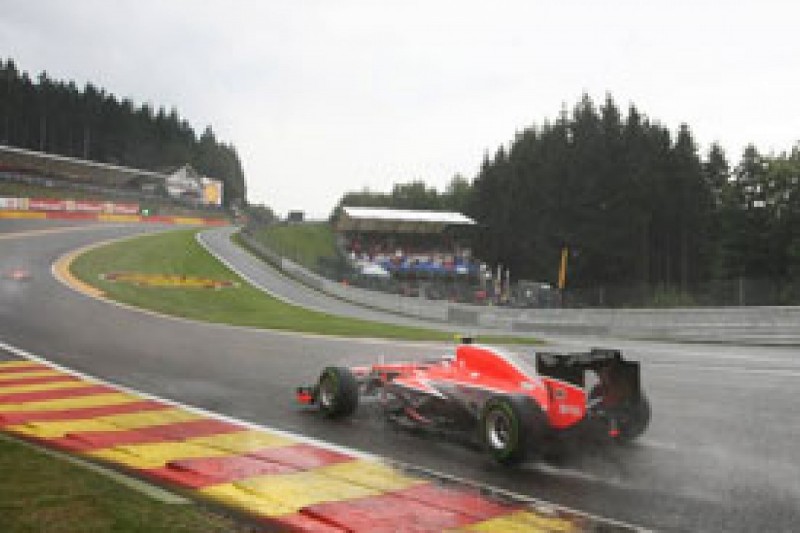 Chilton was also tempted to return to the pits for more intermediates, but opted to stay out and earned a career-best 16th on the grid.

It was the first time since the 2010 Belgian GP that a Marussia (then racing as Virgin) has reached the second phase of qualifying.

"We pitted for slicks and on the outlap I said 'guys, it's too wet, let's come in'.

"They were ready, but just before coming in I changed my mind because there was three minutes to go and that was enough at Spa for it to be dry and it was the right decision.

"I'm incredibly happy for the team as they haven't been in Q2 for three years and it was good for me to show my pace in good conditions and the dry."