Like team-mate Kimi Raikkonen on Thursday, Vettel started the day with an installation lap trialling the prototype cockpit protection system that has so far provided a disparity of opinions between drivers.

Vettel later went on to post a lap of 1m22.852s on Pirelli's super-soft compound, just 0.087 seconds behind Raikkonen's leading time to date on the new-for-2016 ultra-soft rubber, and 0.042s off his own best from last week, again on ultra-softs.

Shortly after, Vettel began a run on the ultra-soft and posted the fastest time through the first sector of Barcelona's Circuit de Catalunya, only to then abort the lap.

Toro Rosso's Carlos Sainz proved to be Vettel's closest challenger, finishing 0.282s adrift of the four-time champion with a lap on the ultra-softs.

Like Vettel, Sergio Perez's best time in the Force India came on the super-softs, but with the Mexican finishing 0.889s off the pace of the Ferrari.

Hamilton, who declared on Thursday that he hoped to put the Mercedes "on a knife-edge" with some high-speed laps given virtually all his running had been on mediums, did not get his wish.

All of Hamilton's laps on his final stint in the morning - with Nico Rosberg taking over the in the afternoon - were run on the medium compound, with the three-time champion finishing 1.281s behind Vettel.

At the end of Hamilton's 68th lap the previously bulletproof W07 made an unusual noise on the start-finish straight, with the Briton pulling over to one side shortly after the pit exit, bringing out a red flag.

Red Bull's Daniel Ricciardo was fifth quickest courtesy of soft rubber, while McLaren's Jenson Button was only sixth and 1.862s off the pace despite his best time being on ultra-softs.

Button started the day by conducting a number of installation laps with rake devices on the MP4-31 as McLaren worked on aerodynamics.

Jolyon Palmer jumped up to seventh late on with a lap on super-softs, with Sauber's Marcus Ericsson and Haas's Romain Grosjean next up on softs, finishing 2.1s and 2.4s behind respectively.

Williams' Felipe Massa was the only other driver to set a time, the Brazilian nearly three seconds down on medium tyres.

Due to a mechanical issue, Manor and Rio Haryanto did not head out until the dying seconds, with the Indonesian able to conduct a solitary installation lap. 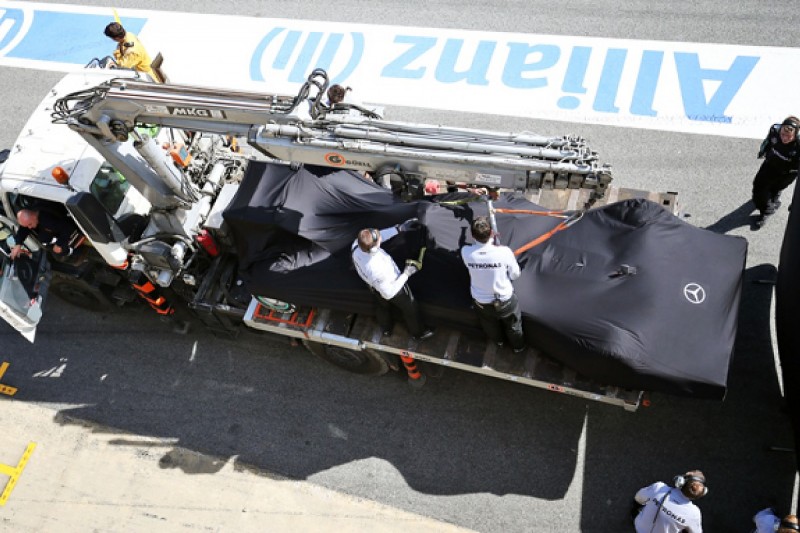