Sergio Perez again set the pace for Force India, as the second day of the final pre-season Formula 1 test got underway in Bahrain

The Mexican, who went fastest on Thursday in what he declared as his first proper day of testing in the VJM07, leapt straight to the top of the times with his first flying lap and ensured he stayed there with another quick effort around an hour before the lunch break.

Fernando Alonso went second fastest for Ferrari, less than a tenth adrift of the Force India. The double world champion clocked up more than 40 laps as the Scuderia seeks to catch up to the pacesetting Mercedes cars.

The morning's running was interrupted by two red flags, both caused by Mercedes-powered cars.

Lewis Hamilton brought out the first by going off with just over an hour gone, but went on to set the fifth fastest time and rack up more laps than anyone after his Mercedes was returned to the pits and cleared of gravel.

McLaren's Jenson Button was the other culprit. The MP4-29, which went third fastest in the 2009 world champion's hands, did not appear again after losing drive around two and a half hours into the session.

Not much was seen of Daniel Ricciardo either. He completed the fewest laps of anyone (15) as world champion team Red Bull's struggles continued.

The Australian, who on Thursday admitted his team has "not been up to scratch" so far in pre-season, set the ninth fastest time but was nearly three seconds adrift of his best from day one, and covered half the distance managed by Jean-Eric Vergne for sister team Toro Rosso. 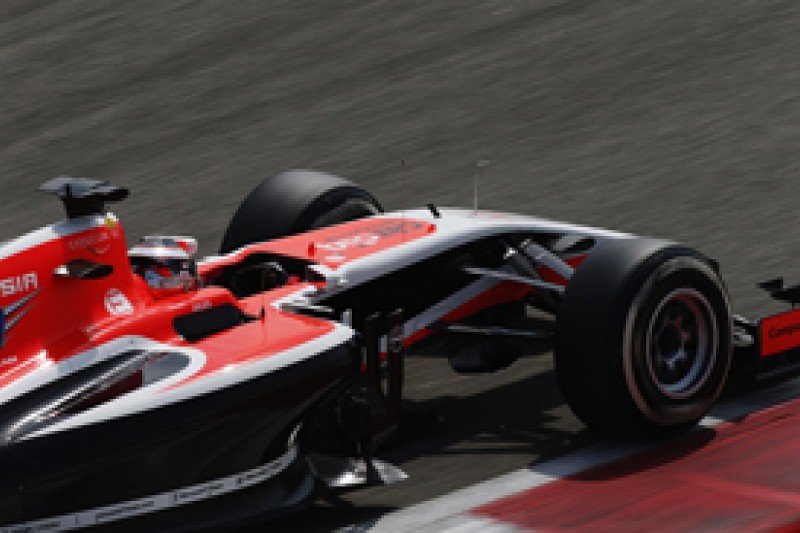 Felipe Massa took over the Williams FW36 from Valtteri Bottas and went sixth fastest as the team switched focus from long runs to set-up and aero performance work.

Pastor Maldonado endured another difficult session in the 'twin-tusk' Lotus E22. The Venezuelan's running was curtailed early by an exhaust problem on day one and he has completed just 24 laps so far on day two after the old one was re-fitted.

Caterham suffered another significant delay as new parts turned up late and had to be fitted during the early part of the session.

Marcus Ericsson took over driving duties from Kamui Kobayashi and took up residence at the bottom of the timesheet, three quarters of a second behind Maldonado's Lotus.