Hamilton looked under pressure after the first Q3 runs, but put in a stunning final lap to take pole position by 0.664 seconds from Ferrari's Kimi Raikkonen.

Although Sebastian Vettel had been just 0.034s behind Hamilton following the initial Q3 laps, he couldn't find enough time on his final run to keep his team-mate at bay or pressure the Mercedes driver. Vettel suggested he had pushed too hard in Turn 13 on his last lap as he had to settle for third.

Bottas was consigned to 10th after crashing at Turn 2 on his first flying lap in Q3.

The Mercedes driver hit the inside kerb at Turn 1, which appeared to push him deep mid-corner and meant he skimmed the damp grass with his left-rear wheel.

He attempted to hold it through the second part of the right/left, but lost the rear and backed into the wall - coming to rest in the middle of the track.

Max Verstappen, who had been just over half-a-tenth off Hamilton after the first Q3 runs, ended up fourth after losing the rear through the Turn 13 right-hander. Team-mate Daniel Ricciardo was next up but has a three-place grid penalty for his Friday red flag infringement.

While ultrasofts were the tyres of choice for the rest of the field throughout qualifying, the two Red Bull drivers will start on the supersofts having used them to set their Q2 times.

Haas pairing Kevin Magnussen and Romain Grosjean made good on the team's promising testing and practice pace with sixth and seventh fastest, albeit two seconds off the pace. 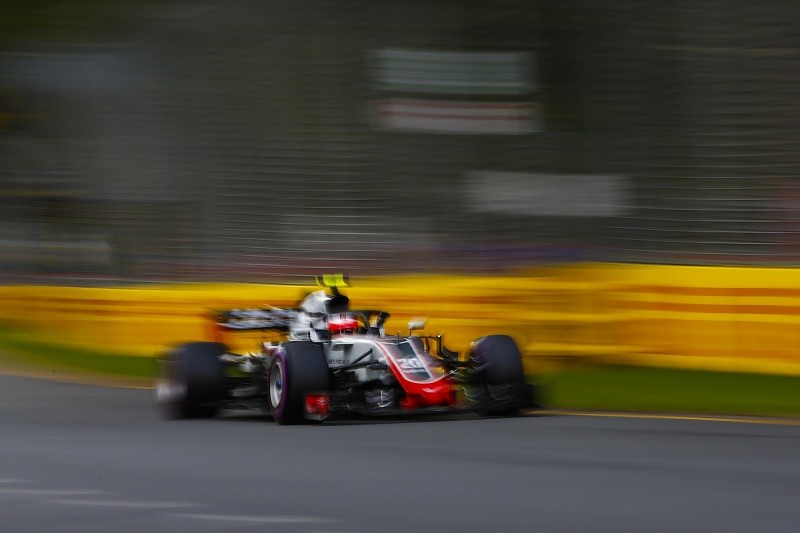 Thanks to Ricciardo's penalty and Bottas's crash, Haas is therefore set to start with a third-row lockout.

Renault pairing Nico Hulkenberg and Carlos Sainz Jr were eighth and ninth, with the German shading his team-mate by just under half a tenth.

Fernando Alonso was eliminated in Q2 after failing to improve on his second run, having a moment at Turn 3 and ending up three tenths slower than his earlier attempt.

That was enough to put him 11th ahead of McLaren-Renault team-mate Stoffel Vandoorne.

Sergio Perez admitted Force India "has work to do" after ending up 13th, one place ahead of Williams driver Lance Stroll.

Stroll, like Alonso, overdid it into Turn 3 but then ran through the gravel, meaning he was unable to improve on his first-run pace.

Esteban Ocon completed a difficult day for Force India, aborting his first run in Q2 and then lapping just over half a second slower than Stroll to end up 15th.

Toro Rosso-Honda's Brendon Hartley was quickest of the five drivers eliminated in the first segment of qualifying, missing out on a place in Q2 by just 29 thousandths of a second to Ocon.

The two Sauber drivers both completed three runs, with Marcus Ericsson ending up 17th fastest and less than a tenth ahead of rookie team-mate Charles Leclerc.

Leclerc complained of an error at the Turn 4 left-hander that cost him a shot at advancing to Q2.

Williams debutant Sergey Sirotkin was outside the dropzone after the first Q1 runs in 15th place, but was shuffled down to 19th by the end of the session despite improving by just over three tenths on his second run.

That put him ahead only of the second Toro Rosso of Pierre Gasly, whose final attempt was ruined by locking up and running off track and through the gravel at the Turn 3 right-hander.