Marussia may be celebrating its 10th place finish in the constructors' championship, but the quirks of Formula 1's commercial rights income structure means it will have to wait another year before a potentially big pay day

The Banbury-based team staved off the threat from Caterham at the Brazilian Grand Prix to finally break in to the top ten teams.

That breakthrough means that Marussia will earn around $10 million (USD) from what is known as Column 2 prize money for the team that finishes tenth.

However, because of an incentive payment for new Formula 1 teams that was agreed by Bernie Ecclestone from the start of 2010, Marussia would have got $10 million (USD) anyway if it dropped to 11th in Brazil.

Its finances then will face little benefit in the short term from its result this season.

The real incentive for Marussia could come at the end of next season if it manages to finish 10th or better again.

That is because as well as taking the Column 2 payment, Marussia would then qualify for the bigger prize of eligibility to Column 1 money, which is earned by teams that have finished in the top ten for two of the previous three years.

Should Marussia manage that next season, then its financial boost from Column 1 could be as high as $30 million, for it earns the right to take home an equal share of a prize pot that is distributed to the top ten teams.

This is why next season's battle between Caterham and Marussia will have an extra edge, because they will be fighting over tens of millions of dollars.

Marussia president and sporting director Graeme Lowdon would not confirm the specifics of the prize money but welcomed what tenth place meant for the longer term.

"I can't go into the details of the contract as they are confidential," he told AUTOSPORT.

"But it is widely reported that the way the mechanism goes, there are elements related to how we do over a longer period of time and also in the previous season, so this really sets us up in a really good position to build on for the future." 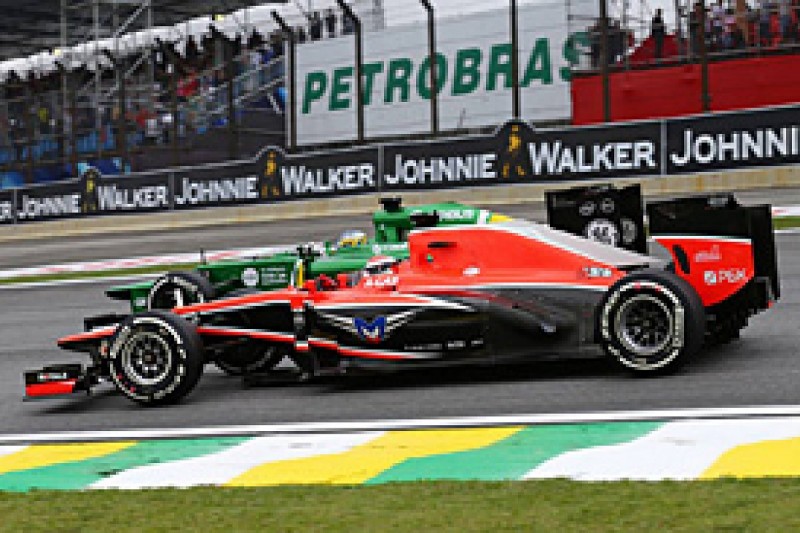 Although the major financial benefits for Marussia have not yet come, there are other reasons to welcome the top-ten finish immediately, because there will be improved travel perks from Formula One Management next season plus a move up the garage order.

Lowdon said: "I guess it will make pit exits a bit more difficult as we won't be the end garage any more.

"But it is progress and if you are not moving forward in F1 you are going backwards. We are really happy to be a team that is moving forwards."