Red Bull has made huge gains this term, resulting in two victories, while Force India's update package introduced in Spain has left Williams facing the prospect of finishing fifth.

Dropping behind Red Bull is nothing to be ashamed of, especially given the four-time world champion team has a budget that is nearly double Williams'.

But the possibility of losing out to Force India, on a similar budget but without the quality of facilities of its rival, was not something Williams genuinely entertained.

The key to the disappointing form lies in development. Williams outdeveloped every other team in 2014, ending the year with the second-fastest car based on pure performance.

That rate slowed last year, but it was strong and consistent enough to maintain third in the constructors' championship.

But Williams did not meet its targets over the winter, putting the team on the back foot ahead of the season. When it brought updates to the track, they didn't deliver as expected.

"I knew that we had come into this year below the targets I felt we should've had over the winter so the FW38 hadn't moved on as far as it should've.

"The FW36 was a good car, the FW37 had what I call a normal winter development and was still a good car.

"But we had a poor winter [this year] and haven't had a very good summer either in the development phase so we are a fair bit down.

"If you compare to Mercedes, we haven't lost much. What has happened is we've seen Red Bull making huge strides - both power unit and chassis - and Force India making good chassis/aerodynamic strides." 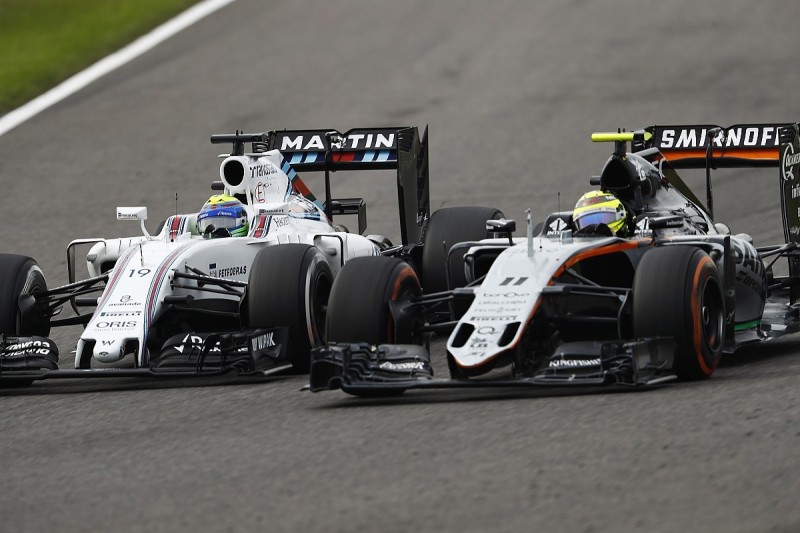 Williams made an early decision to divert resources to 2017, which in turn has had an impact on development during the season.

However, Symonds admits the updates Williams has brought simply haven't delivered as expected and that has been particularly painful given Force India has successfully developed its car.

"Because of the new [2017] cars it became ever more important you hit things right," he adds.

"This year we put a lot of effort into the front wing which actually didn't pay off anywhere near the amount we hoped it would.

"In contrast Force India has actually done some really good work. Their upgrade, once they figured out how to use it, has been really good.

"We added a few points here and there as the floor's been quite good, the cooling work's been OK, but as I say the front-wing work hasn't been quite so good.

"We're getting to the end of the season now where it's starting to show quite a lot."

Over the last two seasons, Williams has performed well in high-speed corners but struggled with low-speed - but according to Valtteri Bottas, that has switched around this year.

Symonds agrees: "We worked so hard on the low-speed corners, and we have a better balance and traction through them.

"Some of the work we instigated after Monaco 2015 led to us gaining some productive stuff, but the high speed is about downforce and we are definitely dropping back on that."

Tyres have been another key focus for Williams this year with Symonds conceding the team has diverted time and resources into "chasing down the Pirelli [tyre pressure] prescriptions" to the detriment of aero development.

"The pressures and cambers we're having to run at really do mean you've got to try a few different things," he says.

"That's really stopped us working on the bits that make the car go faster, just trying to make the tyres last a bit. As you can see we are actually quite good on our tyres now."

Hanging onto third for a third successive year was always going to be a big ask.

It managed to do so by capitalising on Ferrari's struggles in 2014 and Red Bull's in 2015.

With Red Bull likely to be strong again next year, McLaren-Honda ever improving and Ferrari always a threat given its significant resources, Williams could find it even tougher, especially if Force India is strong once again.

Its supplier Mercedes also no longer has the significant engine advantage it enjoyed at the start of the V6 era as Ferrari, Renault and Honda have caught up.

Given the overhaul of the 2017 aerodynamic regulations, whether it is able to stop the slide will hang on if it has learned the lessons encountered during a poor winter and inconsistent season of development this term.