With only six weeks until the first pre-season test of 2014, Formula 1 teams are working through the mandatory crash tests

Sauber and Caterham were first to announce last week that their new designs had successfully made it through the process.

Since the start of 2012, cars have had to pass all crash tests before running, whereas previously this had to be done for the first race.

These tests must be completed with a delegate present and in an approved facility, such as the Cranfield Impact Centre.

Teams optimise the structures to meet the tests using purpose-developed software. By altering the layers of carbon fibre and honeycomb material sandwiched between the carbon skins, teams will be able predict the crash response of the chassis.

This is an evolutionary process and structures get progressively lighter and better able to cope with the test loads.

The nosecone now needs a lower tip. For aerodynamic considerations, this tip will be narrow, making it more difficult to meet the crash test standards. This hooked end to the chassis makes the load paths for the crash tests more tortuous and harder to meet with a light structure.

An important development for 2014 are side impact spars that need to meet a common design to ensure oblique impacts do not rip the spars from the sides of the cockpit.

The rear impact structure does not have any specific rule changes, but the switch to turbo engines and a central exhaust exit will place very different thermal and aerodynamic demands on this part.

WHAT HAPPENS IN A CRASH TEST

The impact tests are the dynamic tests, where the chassis is driven at solid objects, as shown in Caterham's recent video. 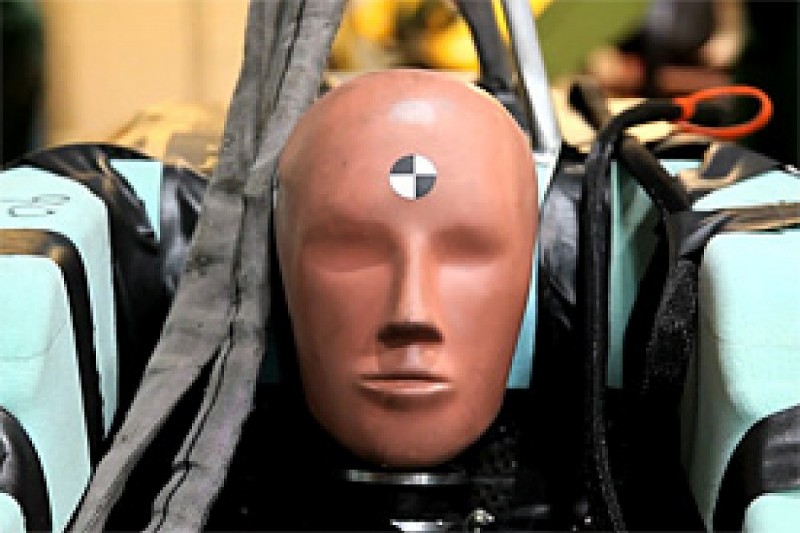 Tests are conducted with the monocoque bolted to a sled. The car is equipped with a crash-test dummy and the sled is pulled by cables to the impact point.

The speed of the car at impact is surprisingly low at just 38mph, given F1's cornering speeds, but as the impact is with a solid immovable object the resulting loads are representative of a real F1 crash where the car hits deformable objects.

In measuring the impact, the car has several deceleration phases, which must average out at no more than 40g. This enormous force makes the crash test dummies weight shoot up to six tonnes.

The second test is to ensure cars can stand up to secondary front-end impacts. In this car the monocoque front has no nose cone but is fitted with an aluminium plate and is fired at the impact site.

This time the car hits four crush tubes, which apply some 360kN of force into the car. There is no specific deceleration to be tested with this load, but the monocoque must not be damaged, nor its seat-belt mountings.

Subsequent impact tests are completed on the rear crash structure and steering column, but these do not require the entire car and can be conducted on separate occasions, as Sauber has elected to do.

Then come the static loads tests. These are numerous and apply loads into the monocoque and its roll structures at selected points.

These tests check the strength and integrity of the tub with, for example, a nine-tonne vertical force placed on the roll hoop with no more than 25mm of deformation allowed.

Subsequent tests apply loads to the cockpit sides, fuel tank floor, cockpit floor and rim, as well as push off tests for the side impact spars and rear crash structure.