Lewis Hamilton’s recovery from near the back of the Spanish Grand Prix field to finish fifth in Barcelona left his Mercedes team hugely encouraged. But did he have the pace to actually win the race without his lap one contact with Kevin Magnussen?

For after a season where a top five would have been something to be happy about at times, even through complete luck, to get there after charging up from 19th on the road said much about the progress made with the W13.

As team boss Toto Wolff said on Sunday night: “With Lewis, we had probably the fastest race car today. He was 50 seconds behind at the end. And he caught all the way up, and at stages in the race he was the quickest. That shows the potential that the car has.”

Wolff’s tone is bullish enough to prompt some thought about just what would have been possible if Hamilton had had not hit trouble at Turn 4 on lap one when he clashed with Kevin Magnussen.

Having finished the race with roughly the same 50+ seconds gap that he had at the end of lap one, is there even an argument to suggest that Hamilton could have won?

Let’s dig into the figures.

Hamilton’s tangle with Magnussen and the subsequent puncture meant he had lost touch with the main pack by the end of the opening lap once he had been in the pits.

He resumed in 19th place, about 38.6 seconds behind Nicholas Latifi in front of him and a whopping 53.908 seconds adrift of then race leader Charles Leclerc by the end of lap two.

Having moved off the medium and on to a used soft compound (with Leclerc the only frontrunner with a fresh set), Hamilton did not make much of an impression early on. In fact, clearly with an eye to going as long as he could on the set, he drifted off the front rather than closed in.

He was more than one minute back by the end of lap eight, and by the time he came in for his second stop at the end of lap 22, he was a full 1m07s behind Leclerc. 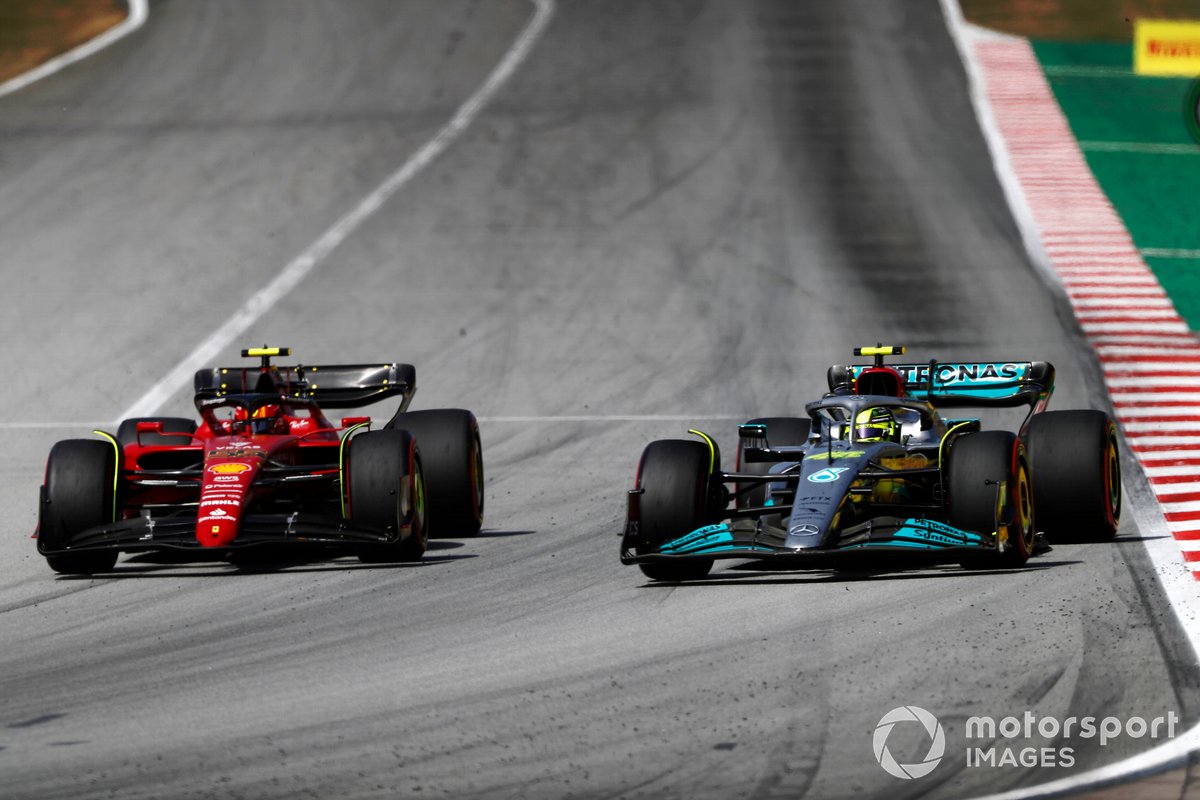 After the switch to mediums, Hamilton’s gap to Leclerc stabilised at around the 1m16s region before his Ferrari rival’s power unit failure changed the game at the front of the pack.

When Mercedes teammate George Russell took the lead on lap 27, Hamilton was 1m02s seconds back, and it was in this phase that – as the leaders battled it out - he was able to slash into his deficit.

Being on fresher mediums - he had stopped nine laps after Russell and Verstappen and five after Perez - the gap to the trio up front came down by more than one second per lap at times.

As the lead of the race then shuffled around due to pitstops, Hamilton maintained solid progress so by the time he pitted for the third time on lap 48, he was just 31.2 seconds behind.

He switched to softs, slightly earlier than Perez and Russell did, and completed his first lap out of the pits 51.6 seconds behind race leader Verstappen who was on mediums.

He soon found his way past Sainz on lap 60, and set about continuing to push on – getting the gap to Verstappen down to 39.331 seconds at the end of lap 62.

But, with alarms ringing on the Mercedes pitwall about engine temperatures as the result of a water leak, Hamilton then had to back off to ensure he made the finish.

Dropping around two seconds per lap, the leader's advantage grew to 54.534 seconds at the chequered flag – just half a second more than it had been at the end of lap two.

The figures – especially Hamilton getting within 31 seconds of Verstappen in that final stint – do point to him having been in the mix with Red Bull if things had played out without the drama on the opening lap. 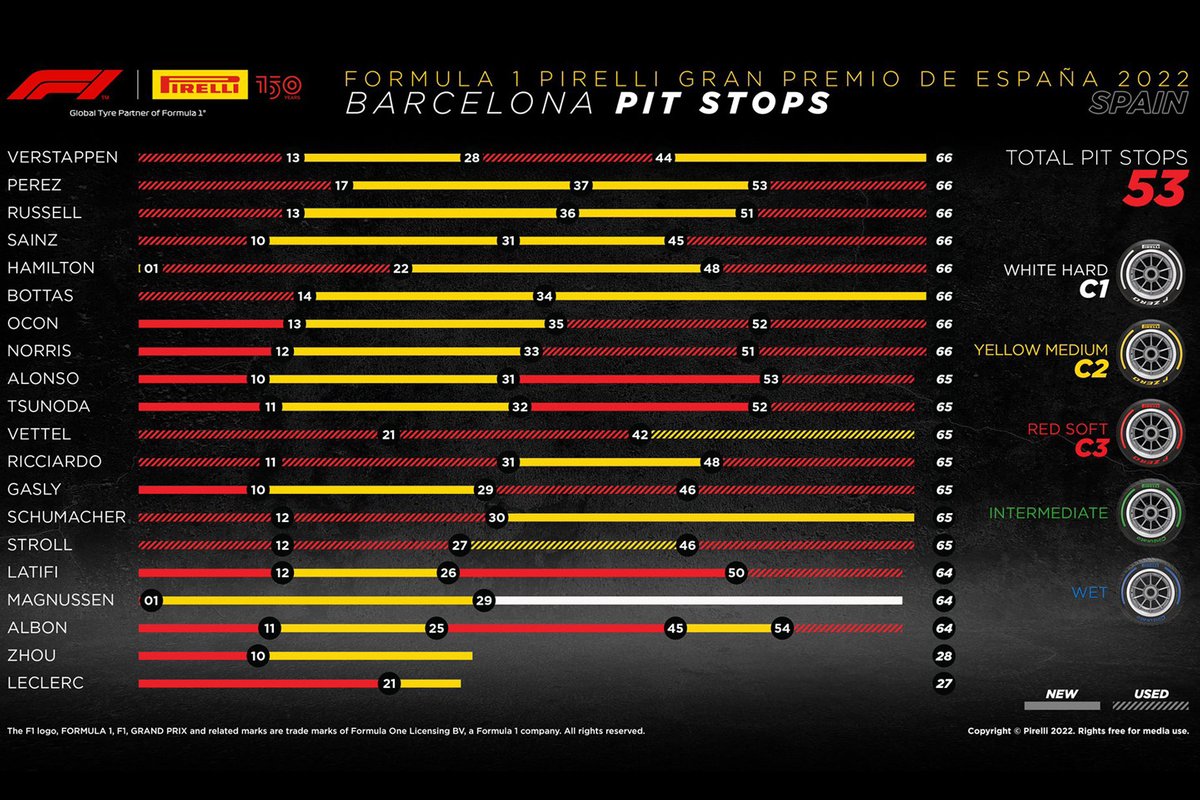 Hamilton's pace was helped by being forced off sequence, which saw him run in clear air and look after his tyres. A much longer early stint on the softs allowed him to claw back time to the leaders on his medium stint.

But what is always hard to estimate is how the pace would have been different if Hamilton was racing in a pack as opposed to doing his own thing alone, when he isn’t worrying about rivals passing him and he can focus solely on extending tyre life.

He would definitely have been in the mix at the front though – before the eventual water leak would have put paid to any hopes of a win against Verstappen.

There would also have been decisions to be made on the Mercedes pitwall about potentially moving Russell aside for strategy reasons; and there could have been consequences for Red Bull, not getting as much free air for switching Verstappen on to a three stop.

However, despite it still being quite theoretical, there is every reason to believe that second place was on the cards for Hamilton with the pace he had.

What is perhaps most significant though is that the way things played out were in contrast to Saudi Arabia and Imola, where he got trapped in the pack and could not make any progress.

And, for a man who has had a rough ride since losing the world title in Abu Dhabi last year, it was finally the glimmer of hope he has been chasing for a while.

“A race like that is like a win,” he said. “And it actually often feels better than a win, when you’ve come from so far back, and been through so much.”

How Verstappen was nearly caught out by F1's cool fuel rule