Alonso: We need to stop putting F1 fans against each other on social media

Fernando Alonso believes Formula 1 fans need to stop being put up against each other after taking to Twitter to clarify comments about Lewis Hamilton in a Dutch newspaper interview.

Alonso said he thought Verstappen had “performed better” than Hamilton last year and was a worthy champion in 2021, adding: "I also have a lot of respect for Lewis. Still, it is different when you win seven world titles when you only had to fight with your team-mate.

“Then I think a championship has less value than when you have fewer titles but have had to fight against other drivers with equal or even better material.”

But after the quotes were picked up and started to circulate on more outlets stating that Alpine driver Alonso considered Verstappen’s championships to be more valuable than Hamilton’s titles, the Spaniard took to Twitter to clarify his comments.

He wrote: “And again… Please, all the titles are amazing, well deserved and inspiring. Incomparable to each other and let’s enjoy champions and legends of our current time.

“Tired of the continuous search for headlines. Let's enjoy them.”

The quotes and tweet led to fierce discussion among fans on social media, but Alonso said he wanted to “try to help and make social media a better place” by clearing up his comments.

“We need to all collaborate on that,” said Alonso. “We need to stop putting the fans against each other.

“We are all in the same [thing]. Great champions, great sportsmen, and we try to enjoy this beautiful time.”

Alonso noted in the original interview that he did not fight against Renault team-mate Giancarlo Fisichella for his titles in 2005 and 2006, nor did Verstappen battle against Sergio Perez or former team-mate Alex Albon to win races. 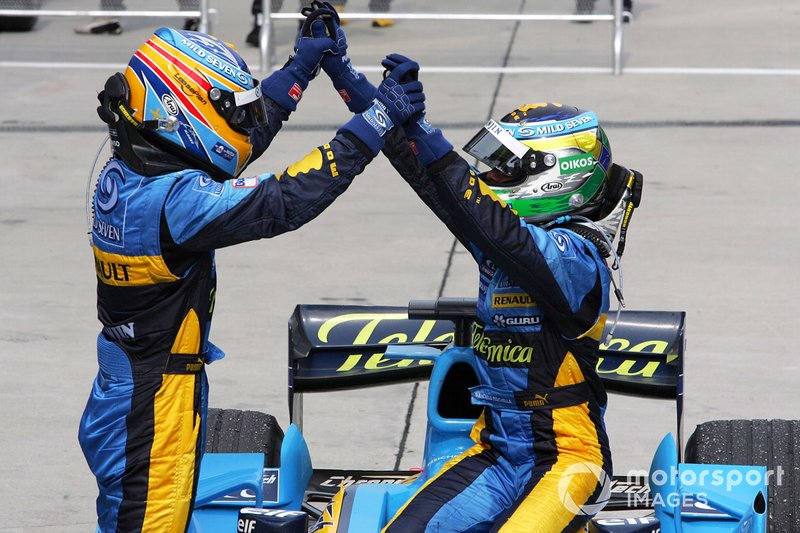 “But [Michael] Schumacher in particular fought with his team-mate Rubens Barrichello to become champion five times in a row, and Hamilton with Nico Rosberg and Valtteri Bottas,” Alonso added.

But seemingly in response to Alonso’s comments, Hamilton posted a picture of them together on the podium from the 2007 United States Grand Prix when they were team-mates at McLaren.

The race saw Alonso fume at McLaren as he lost to Hamilton - then in his rookie season - amid an acrimonious season that ended with Alonso leaving after just a single year.

Hamilton posted the picture of him standing on the top step of the podium with his hand on Alonso’s shoulder, simply with a thumbs up emoji.